Under NRS 205.240, Nevada law defines the crime of petit larceny as intentionally taking another person’s property (without permission) when the value of the items is less than $1,200.00. If the stolen property is valued at $1,200.00 or greater, then the more serious crime of grand larceny can be charged.

A criminal record seal for a petit larceny conviction may be available 1 year after the case closes.

Petit theft is a misdemeanor in Nevada. The maximum sentence includes:

But many prosecutors will agree to dismiss the charge if the defendant pays the fine and restitution and completes Petit Larceny School.

Common defenses to Nevada petit larceny charges include showing that:

In this article, our Las Vegas petty larceny lawyers discuss: 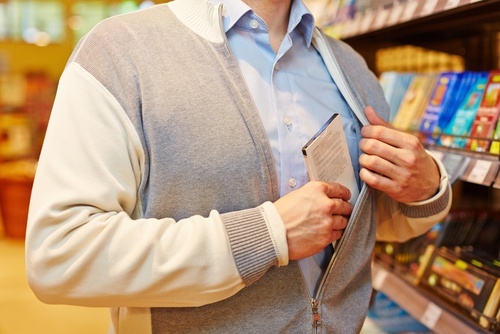 Petty larceny in Nevada is stealing less than $1,200 worth of goods.

1. What is petit larceny in Las Vegas, Nevada?

The legal definition of petty larceny is when someone intentionally steals another person’s property without their consent when the property is worth less than $1,200. Petty theft cases typically stem from the following situations:

Courts might rely on expert testimony and/or market research to determine a stolen item’s worth. Ultimately, courts attribute the highest value to the stolen property by any reasonable standard.2

1.1. Petit larceny versus other larceny crimes

2. What are the penalties for petit larceny in Las Vegas, Nevada?

As a misdemeanor, petty larceny carries the following punishment:

In addition, the court may order that the defendant pay restitution to the victim. The amount of restitution depends on the stolen items’ value.8

3. Can a petit larceny charge be dismissed?

Possibly, especially if it is the defendant’s first offense. The typical scenario is for the defendant to enter a “submittal” to petty larceny. This means that the prosecutor will dismiss the charge as long as the defendant does the following:

But if the defendant fails to complete these terms, the judge will convict the defendant of petty larceny and possibly impose jail.

4. What are the defenses to petit larceny?

There are various arguments a criminal defense attorney may use in fighting a Nevada petty larceny charge. Which ones will prove most effective depend on the facts of the particular case. Three of the most common defense strategies are:

Merely touching someone else’s property is not the same as taking it. Henderson criminal defense attorney Michael Becker gives an example of this distinction:

Example: Friends Jane and Jill go to Walgreens, where Jill dares Jane to steal a lipstick. Jane runs her hand over one of the lipsticks but quickly loses her nerve and takes her hand away. Meanwhile, a cashier overhears the exchange and alerts Las Vegas Metro that Jane has stolen a lipstick.

If the police cite Jane for petty larceny, the charge should be dismissed because Jane did not steal anything. Touching the lipstick like any patron might should not amount to a taking, even if she was momentarily considering stealing it.

Petty larceny is an intent crime. Therefore, defendants may not be convicted of it unless they took an item with intent to steal it. Boulder City criminal defense attorney Michael Becker gives an example:

Example: Jared goes into CVS to buy a soda. While in the store, he gets a phone call. Preoccupied with the phone call, he walks out of the store forgetting to pay. Since Jared did not mean to steal, he committed no crime.

4.3. The property belonged to the defendant

Sometimes defendants get falsely accused of stealing property that is theirs to begin with. Mesquite criminal defense attorney Neil Shouse provides an illustration of how this can happen:

Example: Andy and Bill broke up but share custody of a cat. One day Bill drives to Andy’s and takes the cat from the front porch in order to drive the cat to the vet.

Still angry over the breakup, Andy calls the police and reports that Bill stole the cat. If Bill gets arrested for petty larceny, the charge should be dismissed once he can show that he co-owned the cat.

In short, defendants cannot be convicted of petty larceny if they owned the allegedly stolen property.

No matter the defense strategy, prosecutors have the burden to prove guilt beyond a reasonable doubt. Prosecutors typically rely on surveillance footage and eyewitnesses as evidence. But as long as the defense attorney can show that the state’s case is too dubious to sustain a conviction, the charge may be dropped.

5. Can I get my petit larceny case sealed in Las Vegas, Nevada?

Petty larceny convictions may be sealed from the defendant’s criminal record one (1) year after the case closes.9 But if the case gets dismissed with no conviction, then the defendant may pursue a record seal right away.10

It is always recommended that people with petty larceny on their criminal record pursue a record seal. It looks very bad to prospective employers and carries a social stigma.

6. Will I be deported for petit larceny in Las Vegas, Nevada?

Probably not as long as the immigrant has only one (1) petty larceny conviction. Petty larceny is technically a crime involving moral turpitude, which is usually deportable. But petty larceny falls under immigration law’s “petty offense” exception because its maximum possible jail time is only six (6) months.11

However, immigration law is constantly changing and is very confusing. Any alien who has been charged with petty larceny is strongly advised to consult with a criminal defense attorney as soon as possible to try to get the charge dismissed. Learn more about the criminal defense of immigrants in Nevada.

Call us if you have been arrested for theft . . .

For years our Las Vegas criminal defense lawyers have succeeded in negotiating petit larceny (petty theft) charges down to full dismissals or charge reductions. You are welcome to call us for a free consultation to discuss how we can help put this case in the past and keep your criminal record clean.

Failing to pay back casino markers is a crime in Nevada under NRS 205.130. And it is very difficult for defendants to win casino marker cases because courts automatically presume they had an “intent to defraud.” Casino markers are lines of credit that casinos extend to patrons to gamble with. In Nevada, patrons usually have ...

All Nevada criminal records are eventually sealable except convictions for either (1) felony DUI, (2) felony BUI, (3) invasion of the home (NRS 205.067) with a deadly weapon, (4) certain crimes against children, and (5) sex crimes. These convictions remain on the defendant’s criminal record forever in the state of Nevada. But if the charge ...

The good news and bad knews about pedestrian accidents in Nevada

The bad news is, Clark County is set to have the most pedestrian knockdown deaths this year since 1994 (when we started keeping score). The good news is, Southern Nevada transit authorities are planning to do something about it… In the next few years, expect two new pedestrian bridges on the Strip: One connecting the ...