NRS 453.3395 is the Nevada drug trafficking law that forbids the possession, sale, manufacture or transportation of 28 grams or more of schedule II controlled substances in Nevada. This statue states that:

"Except as otherwise provided in NRS 453.011 to 453.552, inclusive, a person who knowingly or intentionally sells, manufactures, delivers or brings into this State or who is knowingly or intentionally in actual or constructive possession of any controlled substance which is listed in schedule II or any mixture which contains any such controlled substance[.]"

Nevada's penalty for trafficking schedule II drugs under NRS 453.3395 turns on the amount of drugs:

However, the following defenses may convince prosecutors to reduce or dismiss NRS 453.3395 charges through a Nevada plea bargain:

In this article, our Las Vegas criminal defense attorneys discuss the Nevada crime of trafficking schedule II controlled substances. Click on a topic to jump to that section: 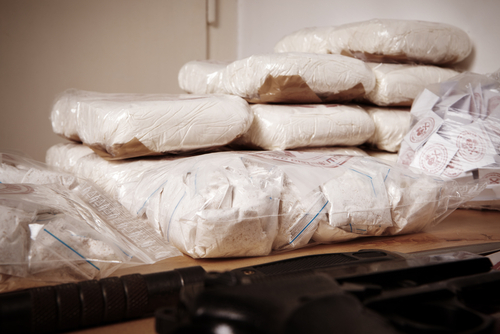 NRS 453.3395 makes it a Nevada drug crime to traffic at least 28 grams of schedule II controlled substances (listed below in section 2).1

Trafficking drugs is a broad term that encompasses knowingly and intentionally:

As long as the amount of the schedule II drugs weighs at least 28 grams, any action a person allegedly takes with the drugs qualifies as trafficking.2

For information about the Nevada crime of trafficking schedule I drugs in Nevada, scroll down to section 7.

NRS 453.3395 charges apply when defendants allegedly traffic any of the following schedule 2 substances:

The penalty for violating NRS 453.3395 depends on the amount of drugs in the case.

Trafficking a schedule II substance in Nevada that weighs at least 28 grams but less than 200 grams is a category C felony. The punishment is:

Trafficking a schedule II substance in Nevada that weighs at least 200 grams but less than 400 grams is a category B felony. The punishment is:

Trafficking a schedule II substance in Nevada that weighs at least 400 grams is a category A felony. The punishment carries a fine of up to $250,000 as well as:

In some cases, the D.A. may be willing to reduce felony drug charge down to the "catch-all" misdemeanor drug charge called drugs which may not be introduced into interstate commerce (NRS 454.351). As a Nevada misdemeanor, the penalty carries:

Trafficking drugs is a federal crime in addition to a state crime. Depending on the case, a defendant may be prosecuted in either state court, federal court, or both.

Common defenses to charges of violating NRS 453.3395 include:

In any event, the prosecution bears the burden to prove guilt beyond a reasonable doubt if the case goes to trial.

5. Trafficking drugs in Nevada is deportable

Trafficking drugs is an aggravated felony.

Trafficking controlled substances is an aggravated felony in Nevada and therefore a deportable offense.8 So if an alien gets arrested for violating NRS 453.3395, his/her attorney should negotiate with the D.A. in attempt to have the charges reduced to non-deportable offenses. Learn more about the criminal defense of immigrants in Nevada.

The waiting period to seal a conviction of violating NRS 453.3395 depends on what class of felony the defendant was convicted of:

And as mentioned in the table above, defendants can pursue a criminal record seal right away if the charge gets dismissed.10 Learn more about how to seal Nevada criminal records.

The Nevada crime of possessing controlled substances for personal use (NRS 453.336) occurs when someone owns or has physical control over a drug. A lawful exception is if the drug was obtained pursuant to a lawful prescription. Penalties depend on the drug's schedule and whether the defendant has past convictions.

The Nevada crime of possessing controlled substances for sale (NRS 453.337 & NRS 453.338) occurs when someone possesses drugs with the intention of selling them. Penalties depend on the drug's schedule and whether the defendant has past convictions.

Like it sounds, the Nevada crime of transporting controlled substances (NRS 453.321) occurs when someone is transferring drugs from one location to another. Penalties depend on the drug's schedule and quantity.

The Nevada crime of selling controlled substances (NRS 453.321) occurs when someone trades drugs for money or something else of value. Penalties depend on the drug's schedule and quantity.

Call our Nevada drug crime attorneys at 702-DEFENSE for a FREE consultation today.

Our attorneys have decades of combined experience of negotiating felony drug charges down to misdemeanors or dismissals. And if necessary, we are ready to fight for your innocence at trial.