The Nevada crime of coercion under NRS 207.190 is intentionally using intimidation, deprivation, or violence to make another person do something he/she is not legally obligated to do. An example is a boss threatening to fire his secretary unless she submits to his sexual advances.

Coercion is a misdemeanor in Nevada as long as no physical force was used or threatened, carrying a penalty of:

But if the coercer did commit or threaten to use physical force, then it is prosecuted as a category B felony in Nevada. The penalty carries:

It may be possible to plea bargain coercion charges down to a dismissal or lesser charge. Common defenses include: 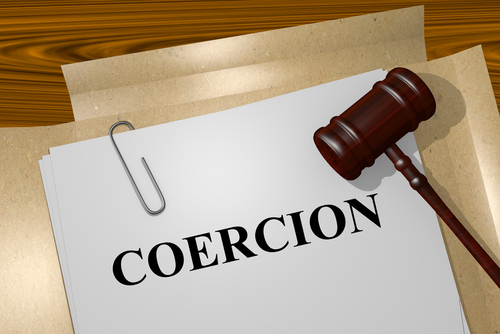 Coercion can be a misdemeanor or a felony in Nevada depending on whether force was used or threatened.

1. Legal Definition of "Coercion" in Nevada

The Nevada crime of coercion under NRS 207.190 occurs when a person intentionally tries to compel another person do something -- or to refrain from doing something -- by either:

Consequently, coercion covers a very broad spectrum of actions where one person bullies another person to make him/her do something -- or not do something -- that he/she does not legally have to do:1

An extreme example of coercion in Nevada is torturing someone until that person reveals information that the torturer is after: The victim has no legal obligation to tell the torturer anything, but the victim is being forced to with physical violence.

Note that people accused of coercion may face additional charges as well depending on the facts of the case. For example, if John threatened Joe with a severe beating unless he stole a car for him -- and Joe stole the car -- then John would face charges for both coercion and the Nevada crime of auto-theft.

Coercion is unique in that it is both a crime as well as a legal defense: If a coercion victim can show the court that he/she was coerced into engaging in criminal activity, he/she should not be convicted of carrying out that criminal activity.

The only exception is if the victim was coerced into committing the Nevada crime of murder: The law dictates that coercion victims should never kill, even under extreme duress by their coercer. However, coercion is a "mitigating circumstances" that could help a convicted murderer get a lesser sentence.2

2. Penalties for "Coercion" in Nevada

The punishment for the Nevada crime of coercion depends upon whether the defendant used force or the threat of immediate physical force. If there was none, then coercion is just a misdemeanor, carrying a sentence of:

But if the defendant did use or threaten the Nevada crime of battery, then coercion is a category B felony, carrying:

Note that courts may not hold these hearings unless the D.A. gives the defendant notice at least 72 hours before the trial. If the D.A. fails to properly serve the defendant with notice, the final sentence will not reflect whether the coercion was sexually-motivated. Learn more about Nevada sex crimes.

There are many possible defense strategies to fight a coercion charge in Nevada. The following are just a few examples that could result in a coercion case getting thrown out or reduced to lesser charges.

Sometimes innocent and legal acts can be misconstrued as coercion.

Another defense is to argue that what transpired did not rise to the level of coercion. Coercion is such a vague offense, and perhaps law enforcement simply misinterpreted the defendant's legal actions.

4. Sealing a "Coercion" case in Nevada

Note that coercion cases that get dismissed can be sealed right away.6 However, the record seal process itself takes several weeks. Learn more about sealing criminal records in Nevada.

5. Deportation from a "Coercion" case in Nevada

Coercion may be considered an aggravated felony or a crime involving moral turpitude.7 Therefore, non-citizens convicted of it may face deportation from the U.S.

Any immigrant charged with a crime in Nevada should retain experienced legal counsel to attempt to get his/her charges reduced to non-deportable crimes or dismissed. Visit our page on the criminal defense of aliens in Nevada to learn more. 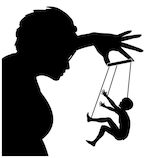 Coercion is a separate crime from extortion, which is where the extorter is trying to get something of value.

The Nevada crime of extortion (a.k.a. blackmail) comprises situations where someone threatens someone else in order to procure something of value such as money or property. Extortion is a category B felony, typically carrying restitution payments as well as:

Nevada bribery crimes occur when a person offers another person something of value in order to persuade him/her to do something for the briber in return. The penalties turn on the context, such as as if the bribery involved public officials, trial witnesses, or judicial officers. In many cases, bribery is a category C felony in Nevada, carrying restitution payments as well as:

The Nevada crime of harassment is knowingly threatening someone else with harm so that the person reasonably fears that the threat will be carried out. A first offense that involves no cyber-harassment or fear of bodily harm is a misdemeanor, carrying:

Otherwise, harassment is a felony.

The Nevada crime of dissuading a witness occurs when a person tries to intimidate a witness from testifying in a case. If the defendant uses no physical force (or threats of immediate physical force), dissuading is a gross misdemeanor that carries:

Otherwise, dissuading is a category D felony in Nevada, carrying:

If you have been arrested or have further questions, call our Las Vegas criminal defense lawyers at 702-DEFENSE (702-333-3673) to set up a free meeting on how we may be able to get your charges lessened or thrown out. We can usually achieve a favorable resolution through negotiation alone. But if necessary, we are prepared to take your case all the way to trial in pursuit of a not guilty verdict.