Most people convicted of a DUI are granted probation. DUI probation allows a defendant to stay out of jail by agreeing to abide by certain terms and restrictions.

These terms usually include payment of a fine and completion of DUI school. The defendant must also agree not to drive with any measurable blood alcohol concentration (“BAC”) during the probationary period (usually three years).

Failure to comply with such terms and conditions may result in a DUI probation violation (also known as a “PV”). The judge can then revoke probation and sentence the defendant to jail.

If, after reading this article, you have additional questions, we invite you to contact our DUI attorneys for additional help. You may also find helpful information in our articles on California DUI penalties and DUI plea bargaining.

1. What are the conditions of probation in a DUI case?

The following are examples of the range of conditions the court can impose. The precise terms will vary depending on whether the defendant is a first-time or repeat offender.1

There are also probation conditions that are imposed regardless of whether it is a first or subsequent conviction.2 This includes: 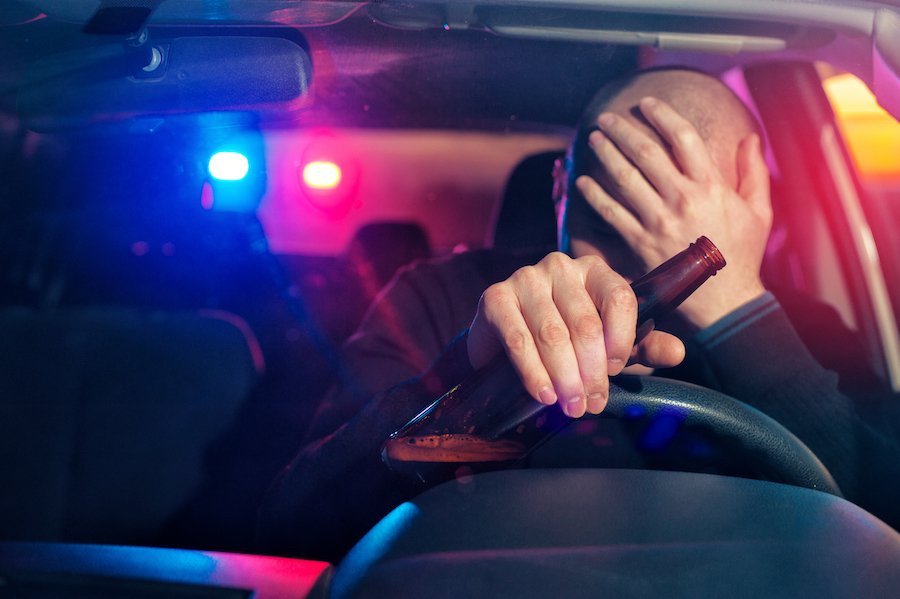 Violating a condition of DUI probation in California can result in a defendant going to jail.

2. What is California’s zero-tolerance law?

California Vehicle Code 23600 VC prohibits people on DUI probation from driving with any measurable amount of alcohol in their system. This is referred to as California’s “zero tolerance” law.

People caught violating this law (or refusing to submit to a chemical test while on probation) can have their probation revoked. This will occur if the defendant’s BAC is measured at 0.04% or greater. The defendant can usually avoid having probation revoked, however, by spending at least 48 hours in county jail.4

A more serious consequence of violating California’s “zero tolerance” law is an automatic one-year driver’s license suspension.5 To fight this suspension, the defendant must request a DMV hearing within ten (10) days of the “zero tolerance” arrest and then win it.

3. When is an ignition interlock device (IID) required?

Ignition interlock devices (IIDs) allow a car to start only if the driver provides an alcohol-free breathalyzer sample. A judge typically orders a defendant to install an IID (at the defendant’s expense) as a condition of DUI probation when:

The period in which the device must remain installed varies from four months to four years depending on:

The California DMV will also automatically require an IID for a period of one to three years if a driver is caught driving with a suspended license while under the influence of alcohol and/or drugs.9

4. Are there driving restrictions while on DUI probation?

One mandatory term of drunk driving probation is that the defendant does not commit any additional criminal offenses while on probation. This includes vehicle code violations such as:

Another offense that is problematic for people on DUI probation is Vehicle Code 14601.2 VC, driving on a license suspended due to DUI.

VC 14601.2 carries a mandatory jail sentence and heavy fines. It is also what’s known as a “priorable” offense. This means that the penalties increase with each subsequent VC 14601.2 conviction.

And doing any of the above can lead to charges for the probation violation itself as well as the other criminal offense.

5. What is alternative sentencing? Installing an ignition interlock device in one’s vehicles is a common condition of probation in drunk driving cases.

6. Am I required to attend special classes or programs?

Often as a condition of drunk driving probation, the judge and/or prosecutor will require a defendant to attend special alcohol-related classes. Some of these classes, such as California DUI school, are required by law.

Other programs, such as Alcoholics Anonymous (“AA”), are to help with a perceived addiction. Still others are designed to act as a deterrent to prevent subsequent drunk driving. Examples of such preventative programs include MADD’s Victim Impact Panel (“VIP”) and Los Angeles’s Hospital and Morgue (“HAM”) program.

Let’s take a closer look at these programs.

California DUI school consists of any of five court-approved alcohol programs. The precise program a defendant will be sentenced to depends on whether the conviction is for a first or a subsequent offense.

These five “drinking and driving” programs are:

While enrolled in any of these programs, the defendant must refrain from using alcohol and/or drugs. If a program leader suspects that an attendee is “under the influence”, that person faces expulsion from the program and, as a result, a probation violation.

Even if the defendant is not an alcoholic, prosecutors and/or judges will often require him/her to attend Alcoholics Anonymous (“AA”) meetings once or twice a week. The court will give the defendant an attendance verification form. The meeting director must “sign off” on each session the defendant attends.

Failure to attend meetings or to obtain a valid signature on the verification form can be charged as a probation violation.

The MADD VIP program is a “scare tactic” that may be imposed as a DUI probation condition.  Depending on the county in which the defendant is convicted, the court may require attendance at this program by first-time offenders. Other counties may impose it as a discretionary condition of probation.

California’s MADD VIP program lasts about two and one-half hours. It includes a presentation by at least one person whose life has been affected by drunk-driving. It may also include a video presentation and/or a slide show. Depending on the county, there may also be a presentation by a police officer and/or a drunk driving offender.

Los Angeles County sometimes refers first-time DUI offenders to its Los Angeles’s Hospital and Morgue (“HAM”) program, which is run by the coroner’s office. Other counties (including Orange County) may run similar volunteer programs, often aimed at younger drivers (although anyone may be referred).

While not all of the people who are brought into the E.R. or morgue will be victims of drunk driving, some will. The HAM program also includes a power-point presentation and tour of both locations. Attendees will observe bodies being processed (photographed, fingerprinted, and undressed) and autopsied.  Some courts may additionally require defendants to write a 1,000-word essay about their experience.

7. Do I have to show proof of compliance to the court?

Judges require proof of enrollment in any and all programs that are conditions of DUI probation. This includes classes, community service, Cal-Trans, etc. Defendants must also provide proof of compliance with other terms of probation, such as payment of fines and/or restitution.

Failure to provide such proof can result in the issuance of a California bench warrant for the defendant’s arrest.11 A bench warrant authorizes law enforcement to locate, arrest, and bring the defendant before the issuing judge. In addition, once the defendant appears before the court, the judge will likely sentence him/her for a probation violation for disobeying a court order.

Common reasons a bench warrant is issued in cases of DUI probation include failure to:

Call our law firm for legal advice. We offer free consultations on DWI / DUI offenses throughout the state.

If you or a loved one is in need of help with probation violations we invite you to contact our criminal defense attorneys for a free consultation in our office or by phone.

Call us or complete the form on this page to speak confidentially to an experienced California DUI defense attorney in your area.

We also have offices in Las Vegas and Reno that represent people charged with violating Nevada’s DUI probation laws.

What is the Penalty for Illegal Dumping in Ventura County, California?

What are the Penalties for Crimes Against the Disabled in San Francisco?

If you commit a crime against a person with a disability in San Francisco, be prepared for harsh consequences if you’re convicted. Adults with physical or mental disabilities can be particularly vulnerable to crime. Because of this, California law provides specific protections for the disabled (referred to in the law as “dependent adults”) and more ...

There are five common types of alternative sentencing in California criminal cases. These are community service, home detention, drug diversion programs (per Penal Code 1000), drug treatment programs (per Proposition 36), and probation. As to the latter, California law allows for either: misdemeanor (or summary) probation – for misdemeanor offenses, or felony (or formal) probation ...

What are the penalties for violating probation in Los Angeles County?

Per Penal Code 1203.2, Rules for Probation Violations in California, the main penalty for a probation violation is that the judge can: revoke probation, and sentence the defendant to up to the maximum term of the offense for which he was committed. Depending on the facts of a case, a judge may also: revoke probation ...