NRS 203.060 is the Nevada law which prohibits unlawful assembly, which is when people gather together with the intent to commit a crime even if the crime never gets committed.  Penalties for the Nevada misdemeanor of unlawful assembly include up to six months in jail and/or up to $1,000 in fines. The statutes states:

If two or more persons shall assemble together to do an unlawful act, and separate without doing or advancing toward it, such persons commit an unlawful assembly, and are guilty of a misdemeanor.

In this article, our Las Vegas criminal defense attorneys summarize the Nevada offense of unlawful assembly.  Scroll down further to learn the law, defenses, and penalties in Las Vegas. 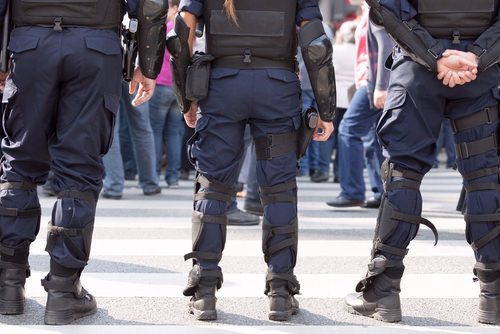 NRS 203.060 prohibits people from assembling together in Nevada with the intent to break the law.

Definition of unlawful assembly under NRS 203.060

The legal definition of "unlawful assembly" in Las Vegas, Nevada, is when "two or more people assemble together to do an unlawful act and then separate without doing it or advancing towards it." In other words, an unlawful assembly is when people gather for the purpose of breaking the law but then disassemble without having committed the intended crime.

An example of an NRS 203.060 violation is protesters congregating at the Las Vegas Courthouse intending to vandalize it but leaving without having done so because they spotted police watching them.  Typical evidence that prosecutors may try to admit in these types of cases includes eyewitnesses, surveillance recordings, and email and phone communications of the alleged participants.

Prosecutors rarely press charges for unlawful assembly in Nevada because it's difficult for them to prove that the participants meant to commit a crime.  But whenever the D.A. does levy unlawful assembly allegations, a defense attorney may consider using the following defenses:

Penalties for unlawful assembly under NRS 203.060

The Las Vegas offense of unlawful assembly is sentenced as a misdemeanor in Nevada.  The punishment is:

If you've been accused of unlawful assembly under NRS 203.060, Las Vegas criminal defense attorneys at 702-DEFENSE (702-333-3673) are happy to meet with you for a free consultation.  They might be able to negotiate a full dismissal so your record stays clean.  Otherwise, they're prepared to fight at trial for a not guilty verdict.