Littering on private or public property carries fines and possibly jail in Nevada. In urban areas and state parks, police are especially vigilant in ferreting out alleged polluters.

Definition of "littering" in Nevada

It is illegal in Nevada to deposit garbage on a public or private property. Even property owners are required to store their rubbish in designated receptacles to be regularly collected. Pahrump criminal defense attorney Michael Becker gives an example of how someone may be charged with littering on his/her own property:

Example: Kyle has a housewarming party at his Henderson house. His guests leave their beer bottles and plates on the front lawn. Before Kyle can clean it up, he's called away on an emergency and leaves the garbage there all day. The Henderson Police could then cite Kyle for littering.

Note that it does not matter in the above example that Kyle had no intention of leaving the garbage out all day. Nor does it matter that his guests were the ones that left the garbage outside in the first place. As a property owner, Kyle has the legal responsibility to keep the premises clear of rubbish.

Also note that Kyle in the above example would probably not be arrested and booked the Henderson Detention Center. Police tend to "cite" alleged litterers as they would drivers who are speeding.

Nevada levies more serious penalties for the littering of potentially dangerous or "unwholesome" substances such as:

Note that people accused of littering that compromises the safety, health or comfort of others may instead face "public nuisance" charges. Tonopah criminal defense attorney Neil Shouse illustrates the distinction between nuisances and littering:

Example: Max is building an extra room on his North Las Vegas house. In the process he pulls out old walls and leave the discarded construction materials on the lawn. Wind blows them onto neighbors' lawns, and parents are afraid their kids will hurt themselves on the wood and nails. In this instance, Max would probably be cited by North Las Vegas police for a nuisance rather than merely littering because the construction materials pose a safety and comfort hazard.

The best defenses to Nevada littering charges depend on the circumstances of the case. Perhaps the defendant was accidentally mistaken for the actual litterer. Or perhaps the defendant was falsely accused out of anger or revenge. Either way, no court should convict a defendant if there is not sufficient evidence to prove beyond a reasonable doubt that he/she is guilty. 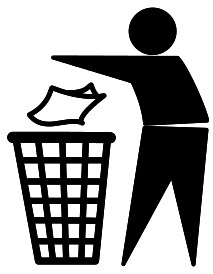 Penalties for "littering" in Nevada

The penalties for littering in Nevada depend on the type of garbage being disposed of and where. Judges typically impose jail only in dangerous circumstances or where the defendant is a repeat offender.

General littering laws are legislated not by state statutes but rather by individual city or county ordinances. However, they are all nearly identical and impose generally the same penalties. For example, Las Vegas Municipal Code 9.12.180 makes littering a misdemeanor in Nevada carrying a sentence of:

Throwing or discarding a lighted cigarette, cigar, ash or other fire-causing material from a moving vehicle is a misdemeanor in Nevada carrying up to six months in jail and/or up to $1,000 in fines.

Depositing any dirt, garbage, rubbish, or dead animal on or within 1,000 feet of a public highway is a misdemeanor in Nevada carrying up to six months in jail and/or up to $1,000 in fines.

Depositing offals of dead animals into any lake, creek or river is a gross misdemeanor in Nevada carrying up to 364 days in jail and/or up to $2,000 in fines.

The penalties for dumping sewage, sludge, cesspool or septic tank effluent, or human waste increase with each successive conviction. However, courts will treat a dumping violation as a first-time offense as long as the defendant has not been convicted of it within the last two years.

A first-time dumping offense in a two-year timespan is a misdemeanor in Nevada carrying:

A second-time dumping offense in a two-year timespan is a gross misdemeanor in Nevada carrying:

A third-time dumping offense within a two-year timespan is a gross misdemeanor in Nevada carrying:

Note that the court may impose several thousands of dollars in civil fines as well.

Accused of "littering" in Nevada? Call a lawyer for help ...

If you have been cited or arrested for 'littering' in Nevada, call our Las Vegas criminal defense lawyers at 702-DEFENSE (702-333-3673) for help. We may be able to get your charges dropped so your record stays clean.

• Will I get deported for “littering” in Nevada?


• Can I seal my “littering” case from my criminal records in Nevada?


• Can I keep my guns if I am convicted of “littering” in Nevada?


• Is it possible to win a “littering” case at trial in Nevada?


Can “littering” charges be dismissed through negotiation in Nevada?


Why would I plea to “littering” in Nevada when I am innocent?