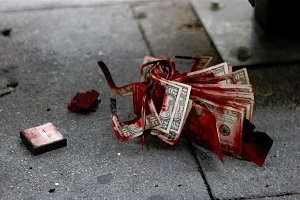 Bank robberies are among the most serious federal crimes in Nevada. The F.B.I. investigates these cases, and the penalty may include decades in prison.

In this article, our Nevada criminal defense attorneys summarize the federal law of "bank robberies" in Nevada. Scroll down to read more about how bank robbery defendants may be prosecuted, penalized, and defended.

The Federal Law of Bank Robbery

Like it sounds, a bank robbery is when someone intentionally steals money or other property from a bank. But note that this crime is very broad. 18 U.S.C. § 2113 prohibits both violent and non-violent thefts from all kinds of banking institutions:

Federal prosecutors may bring bank robbery charges for alleged thefts from either:

A bank is any member bank of the Federal Reserve System. It encompasses banking associations, trust companies, savings banks, branches, agencies of foreign banks, and institutions of deposit insured by the Federal Deposit Insurance Corporation.

A"credit union" must be insured by the National Credit Union Administration Board in order to be protected by bank robbery laws. Similarly, a "savings and loan association" needs to be insured by the Federal Deposit Insurance Corporation.

Federal bank robbery law punishes all types of wrongful taking from banks regardless of whether they are violent or done secretly. Reno criminal defense attorney Michael Becker provides an example:

John walks into a Henderson credit union and holds up a teller. Jim sneaks into a Henderson bank and steals from the vault when no one is looking. U.S. Marshals Service could initially book both John and Jim at the Henderson Detention Center for bank robbery since they both stole from banking institutions.

Expectedly, federal law levies stiffer penalties for violent bank robberies than for robberies where no one is hurt or threatened. So in the above example, John would get a harsher sentence than Jim because John threatened the teller.

A defendant may still be convicted of bank robbery even if he/she did not do the physical stealing. Charges may be brought against someone who receives, possesses, conceals, stores, sells, barters or disposes of any money or property that he/she knows has been unlawfully taken from a bank.

It is also considered bank robbery if the defendant merely attempts to carry out the crime even if the attempt fails. Therefore, a defendant can still be prosecuted whether or not he/she makes away with any money.

How the F.B.I investigates bank robberies

It is not uncommon for the F.B.I. to work with the U.S. Attorney's Office to compile a mountain of evidence against bank robbery defendants. This could include security camera footage, locator devices, marked bills, exploding dye packs, and silent alarms.

Each bank robbery allegation is unique. Therefore, the best way to defend against charges of violating 18 U.S.C. § 2113 depends on the facts of the given case. Below are three of the most typical defenses:

The punishment for a federal bank robbery conviction in Nevada typically consists of a fine, time in Federal Prison, or both. The extent of the sentence depends on the severity of the alleged bank robbery itself:

Receiving money stolen from a bank in Nevada

Stealing from a bank without threats or violence in Nevada

Stealing from a bank with threats or violence in Nevada

This type of bank robbery more closely resembles the classic "Bonnie and Clyde" scenario of threatening a teller to hand over a bag of money. The penalties depend on whether the defendant assaulted the defendant, used a deadly weapon, or killed someone:

A defendant faces a ten (10) year sentence for bank robbery if he/she forces another person to accompany him/her while trying to avoid arrest or escape confinement. And if the defendant kills someone in the course of a bank robbery, the judge will order life imprisonment or capital punishment in Nevada

If you are facing federal charges for bank robbery, phone our Nevada federal criminal defense attorneys at 702-DEFENSE (702-333-3673) for a free meeting. Our goal is to try to negotiate a favorable resolution where your charges get reduced or dismissed altogether. Otherwise, we will fight for your innocence at trial in pursuit of a "not guilty" verdict.