Stealing a car is a serious felony in Nevada carrying high fines, prison sentences and a marred criminal record that greatly diminishes your chances of getting a job.  Below our Las Vegas criminal defense attorneys explain the definition, penalties, and defenses of the Nevada crime of auto theft.

The legal definition of grand larceny of a motor vehicle in Las Vegas, Nevada, applies when someone "intentionally steals, takes and carries away, drives away or otherwise removes a motor vehicle owned by another person".1 Typical auto theft scenarios include:

In short, auto-theft in Nevada encompasses any situation where someone takes a car that does not belong to him/her without permission.  Grand larceny of a car charges can still stand even if the suspect has the keys, if the doors were unlocked, if the car was towed away rather than driven, or if the suspect planned to return the car eventually.

The Las Vegas crime of carjacking is a more serious offense than straight auto-theft because it involves the suspect attempting to take a car by force, violence or threat. In cases of alleged carjacking, the suspect faces charges for not only the property crime of auto-theft but also the Nevada crime of robbery, battery, and/or assault.

Every Nevada auto-theft case is different, and which defenses would work best will be determined by your attorney based on the situation and evidence.  The most common strategies for fighting an NRS 205.228 violation include: 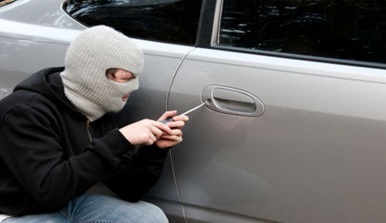 The standard punishments for a conviction of grand larceny of a motor vehicle in Nevada depend on the value of the vehicle at issue.  If it is worth $3,500 or more, Las Vegas auto-theft is a category B felony in Nevada carrying:

And if the car's value is less than $3,500, then Nevada auto-theft is a category C felony in Nevada carrying:

Depending on the case, the prosecutor may agree to a plea bargain for reduced fines or an extended payment plan.

If you have been charged with grand larceny of a motor vehicle in Clark County (NRS 205.228), then call our Las Vegas criminal defense attorneys at 702-DEFENSE (702-333-3673) today.  We will do everything to try to get your case reduced or dismissed, and if you wish we are prepared to fight for you at trial as well.

Also see our article on the Nevada crime of chop shops.

• Will I get deported for an “auto-theft” charge in Nevada?


• When can I seal my “auto-theft” case from my criminal records in Nevada?


• Can I keep my guns if I am convicted of “auto-theft” in Nevada?


• Is it possible to win an “auto-theft” case at jury trial in Nevada?


Can I get my “auto-theft” charge dismissed in Nevada?


Can I meet with the D.A. before “auto-theft” charges get filed in Nevada?