Yes. Dog fighting is illegal in Nevada under NRS 574.060 and 574.070. Dogfights are defined as matches between at least two dogs done for amusement, for gain, or for a show. Under Nevada dog-fighting laws, it does not matter whether neither of the dogs dies, if no one gambles, nor if no one comes to watch the fight...merely unleashing dogs to fight against each other is a crime. 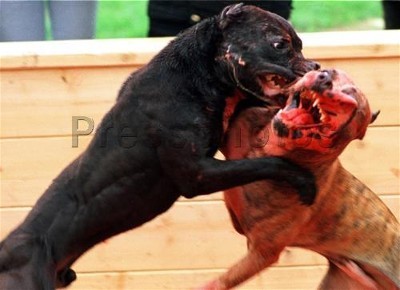 Dog fighting is prohibited in Nevada.

However, Nevada law permits farmers and hunters to utilize dogs for livestock management and hunting, respectively.

Note that Nevada police can confiscate dogs if there is probable cause they are being exploited as fighting dogs. Also note that people who are allegedly violating Nevada dog fighting laws can be prosecuted under federal law as well. The primary defense to dogfighting charges is that the defendant had no criminal intent.

The penalties for dog fighting in Nevada depend on how involved the person was in carrying out the dogfight, and that person's criminal history. For example, a first-offense of watching a dogfight is a gross misdemeanor carrying up to 364 days in jail and/or up to $2,000 in fines. Meanwhile, a third-time offense of participating in a dogfight is a category B felony carrying up to six years in Nevada State Prison as well as thousands in fines. Read more in our article, "Can I go to jail just for watching dog-fighting in Nevada?" Also refer to our article, "Is it a crime to leave a pet in the car in Nevada?"