3M earplug lawsuits are mass tort claims against 3M and Aearo Technologies, the companies that designed and manufactured combat earplugs for the U.S. military from 2003 through 2015. The defective design of those earplugs kept them from fitting snugly in a soldier's ear. As a result, numerous soldiers have suffered hearing loss and tinnitus. There is also evidence that 3M discovered evidence of the defect, but covered it up.

In this article, our products liability lawyers explain how 3M's earplugs were defective and the damage that the earplugs caused to the U.S. service members who relied on them. We will then look at the lawsuits that have been filed against 3M over those defects, including allegations that 3M covered up evidence of the dangers posed by their earplugs. Finally, we will discuss the compensation you may be entitled to receive and what you can do if you have suffered from the defects of 3M's earplugs. 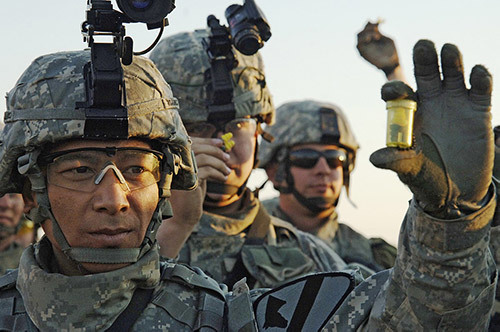 The defective earplugs are 3M's Combat Arms Earplugs Version 2, commonly referred to as CAEv2. The CAEv2 was standard issue in the U.S. Armed Forces from 2003 through 2015. They were designed and manufactured by a defense contractor, Aearo Technologies, which was subsequently purchased by the multinational conglomerate 3M Company.

To do this, the CAEv2 uses a sound channel and filter in the yellow side of the earplug. The louder the sound, the more the filter blocks it.

2. How the earplugs were defective

3M's Combat Arms Earplugs were defective because the way they were designed made it difficult to insert into the ear hole.

When a soldier would insert one side of a CAEv2 into their ear hole, it would compress the edge of the opposite side against the outer rim of their ear hole. When the soldier released the earplug, the edge of the compressed and exposed side of the CAEv2 would decompress. The decompression would push the earplug out of the soldier's ear far enough to drastically reduce the efficacy of the earplug. However, the shift in movement was not enough to be perceptible to the soldier.

As a result, many service members in the Armed Forces were exposed to extremely loud noises, relying on the false promise that they were being protected from hearing loss and other ear damage.

The defects in 3M's Combat Arms Earplugs have been linked to several serious hearing and auditory injuries in service members, including:

These are not trivial conditions. The two most prevalent disabilities suffered by military veterans in the U.S. are hearing loss and tinnitus, with tinnitus affecting 9.7% of veterans, and hearing loss affecting 5.8%.1

Little was known about the defects in the CAEv2 earplug until a whistleblower filed a qui tam lawsuit on behalf of the government against 3M in 2016.2 Since that case, numerous products liability claims have been filed against 3M for hearing loss and other injuries sustained because of the defective design in the CAEv2.

4.1 The whistleblower lawsuit over 3M's earplugs

In the whistleblower lawsuit, the plaintiff claimed that Aearo Technologies and its subsequent purchaser, 3M, knew of the defect in their earplugs as early as 2000. However, they covered it up in a sham testing procedure and then used the results of that testing process to secure lucrative contracts with the military.

According to the qui tam lawsuit, Aearo had to test their earplugs and achieve a noise reduction rating (NRR) requirement for the military.3 Rather than hire an independent facility to conduct the testing, though, Aearo did it in-house, using its own employees.4

This testing found that the yellow side of the CAEv2 was scoring a -2 NRR – meaning it was actually magnifying sound.5 Allegedly because Aearo knew this would be a suspicious result, it “rounded up” the NRR score to 0 – a score that meant the earplug had no impact on noise levels.6 Aearo then touted this score as proof that the CAEv2 would allow soldiers to interact with their surroundings like normal while using the yellow side of the earplug.7

Meanwhile, tests on the dark green side, which was supposed to completely block sound, led to average NRR numbers well below what was expected. This end was expected to receive an NRR of 22, but after testing 8 subjects, it was only averaging an NRR of 10.9.8 The low number was largely because so many of the earplugs were sliding out of the test subject's ears due to the design defect.9

When the CAEv2 was sold to the military, though, the instructions said to simply insert the earplugs, making no mention of folding back the edge of the exposed side of the earplug.13

The qui tam lawsuit claimed that these misleading statements to the government amounted to a violation of the False Claims Act.14

In the aftermath of the qui tam lawsuit's settlement, numerous veterans who had developed hearing loss and tinnitus have filed products liability lawsuits against 3M.

These lawsuits claim that the design defects in 3M's Combat Arms Earplugs caused serious injuries. Additionally, the lawsuits also claim that 3M's failure to warn soldiers of CAEv2's problems, as well as how to prevent them through proper insertion, contributed to hearing loss and tinnitus. Many lawsuits also claim breaches of warranty and fraud.

Because so many people have likely been hurt in the same or similar ways, the lawsuits against 3M were ripe for consolidation into a multidistrict litigation, or MDL. This allows one federal district court to handle all of the lawsuits for pretrial procedures, including:

The MDL for 3M earplugs has been established in the Northern District of Florida.16 The judge assigned to the MDL is M. Casey Rodgers, who served in the U.S. Army from 1985 to 1987.

5. Compensation for hearing loss or tinnitus

If you were in the U.S. Armed Forces between 2003 and 2015, odds are that you used 3M's defective earplugs. If did not suffer from hearing loss before joining the service, but do now, or if your symptoms have gotten worse while you were in the military, you may be entitled to compensation.

That compensation can cover the costs of your:

Additionally, lawsuits against 3M and Aearo have pursued punitive damages for their role in covering up the adverse effects of their earplugs. Punitive damages go beyond just compensating you for your losses, and aim to punish an especially culpable wrongdoer for their egregious actions.

6. What you can do if you have suffered tinnitus or hearing loss

If you suspect that you lost hearing or suffered tinnitus or other medical condition because of the defects in 3M's earplugs, you should see an ear doctor to have your hearing tested. By comparing these results with the results of the medical exam you took when you entered the military, you can see if you have suffered any hearing loss or ear damage since your time in the Armed Forces.

If you have, you can discuss your legal options with a lawyer. Filing a lawsuit and joining the multidistrict litigation against 3M can be a wise move if you want to recover the compensation you deserve and hold the company accountable for putting service members at risk.