Talcum powder lawsuits are mass tort claims by women who have developed lung, endometrial, or ovarian cancer after regularly using talcum powder, also known as baby powder. These lawsuits claim that Johnson & Johnson, the maker of the baby powder they used, knew of the risks of developing cancer, but failed to warn anyone.

Over 10,000 of these lawsuits throughout the United States have been consolidated into multidistrict litigation, and seek compensation for: 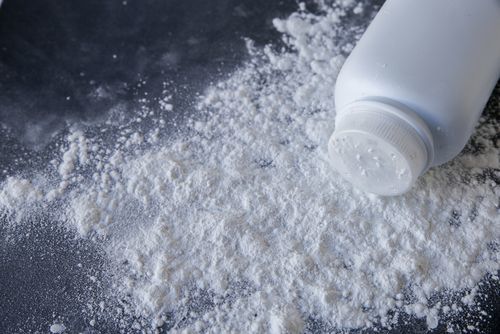 1. What is talcum powder?

Talcum powder, often sold as baby powder, is a super-fine and soft powder made of the mineral talcum. Because talc particles are so soft and because they absorb moisture so well, talcum powder is a base ingredient in numerous cosmetic products. On its own, the use of talcum powder can be for cosmetic purposes, like:

The pharmaceutical company Johnson & Johnson has dominated the market with its baby powder products. However, in addition to Johnson & Johnson, there are a couple of other talcum powder makers, including Sutherland, and Taylor of Old Bond Street.

2. The connection between talcum and asbestos

The mineral talcum is usually found in the same geologic deposits as the mineral asbestos. Asbestos has been linked to the rare cancer mesothelioma. Talcum and asbestos share similarities that make the emergence of one mineral a prime location for the emergence of the other. As a result, many of the mines that extract talcum from the ground also encounter significant deposits of asbestos ore, as well.

It should come as no surprise, then, that talcum is frequently contaminated with asbestos when it is mined, even when care is taken to keep them separate.

Even though the talcum powder that eventually gets sold as baby powder gets ground up and refined after extraction, removing all of the asbestos contamination is nearly impossible. In short, there is no asbestos-free talcum because there are always trace amounts of the carcinogen.1

Talcum and talcum powder that has been contaminated with asbestos could cause the following types of cancer:

Use of talc poses an increased risk of ovarian cancer when it is regularly used by women to soothe the skin in their genital area or for feminine hygiene.

Applying talcum powder to this area, especially the perineal area, can reduce odors and moisture. It can also reduce friction with undergarments and prevent a painful rash. In the understanding that baby powder is harmless, thousands of women have used talcum powder on their perineal area as a feminine hygiene product on a regular basis for years.

Doing so, however, may have put thousands of women at risk of developing ovarian cancer (which sometimes starts in the Fallopian tubes). When talcum powder is contaminated with asbestos and gets into a woman’s body, it can drastically increase the chance that they develop cancer. In short, there is substantial evidence that the use of Johnson & Johnson talcum powder causes cancer.

News that women who used perineal talcum powder faced a heightened risk of developing ovarian cancer created a surge in lawsuits against Johnson & Johnson. All of these claims argued that Johnson & Johnson knew of the risks associated with its baby powder, but failed to warn consumers of the dangers they were facing.

The first cancer lawsuit came in 1997. However, it was successfully defended by the pharmaceutical giant when they were able to avoid disclosing talcum test results and other internal documents.5

It was not until recently that product liability lawsuits against Johnson & Johnson have gotten deep enough into the discovery stage to uncover damning internal memos that suggest the company knew of the dangers, but hid them for years.

These documents, as reported in a special report by Reuters,6 revealed numerous attempts to cover up the problem, including:

The discovery of these damning details led to significant verdicts against Johnson & Johnson, including:

Many of these claims have been pursued individually or in small groups. There have been some class actions. Several of the ovarian cancer lawsuits that have involved individual victims have run into jurisdictional defenses as Johnson & Johnson has successfully appealed verdicts with the claim that the court that awarded them should not have heard the case, at all.

However, there is also a huge multidistrict litigation (MDL) concerning Johnson & Johnson’s talcum and baby powder in the U.S. District Court in New Jersey.12 The claims in this MDL have been consolidated in one court for pretrial procedures, like the gathering of evidence and preliminary motions.

On October 5, 2020, Johnson & Johnson agreed to settle more than a thousand lawsuits with a $100 million settlement.14 J&R is currently trying to use bankruptcy proceedings to attempt to cap the damages they have to pay. Chances are this legal maneuvering will not negatively affect the plaintiffs’ cases. On September 19, 2022, the Third Circuit Court of Appeals will hear plaintiffs’ appeal of the bankruptcy.

5. Compensation for victims of talcum powder

Victims of talcum body powder stand to recover compensatory damages and punitive damages in a successful lawsuit against Johnson & Johnson. These are meant to cover the victim’s losses and setbacks, including:

Additionally, numerous verdicts against Johnson & Johnson have awarded punitive damages against the company for its attempts to cover up the risks of their baby powder. This portion of the verdict has frequently been well beyond the amount of compensation that has been awarded to a victim or their family, and is meant to punish Johnson & Johnson for its conduct.

6. What you can do if you have gotten cancer from talcum powder

Call our law firm for a free case review and free consultation.

If you have used Johnson and Johnson’s talcum or baby powder for personal hygiene and have since developed symptoms that sound like ovarian cancer, you should talk to your doctor. There are tests that can be done to find out for certain if you have gotten cancer. If the tests come back positive, you can promptly receive the medical care that you need to fight the disease.

If you have been diagnosed with cancer and you suspect your talc powder use contributed to it, you should consider talking to a lawyer. Joining the multidistrict litigation or filing your own lawsuit can be the best way to ensure you receive the compensation you need for a serious medical condition you could not have avoided. It can also hold Johnson & Johnson accountable for their reckless conduct that hurt you and others like you. You can call the products liability and defective drug lawyers at the Shouse Law Office for a free case evaluation.

If your loved one is the one who is suffering or who has died, you can talk to a lawyer about your talc lawsuit legal options, including filing a wrongful death claim.

Doing so soon after discovering the cancer, however, is essential. Many states require lawsuits to be filed within two years of the injury.