Nevada law has strict rules outlining what subpoenas should contain and how they can be served on the witnesses. Subpoenas that are lacking may be held unenforceable by the court.

Witnesses must comply with subpoenas‘ orders or else risk being held in contempt by the court. The penalties for contempt typically include:

Issuing subpoenas is necessary only for witnesses who would not otherwise agree to come to court. 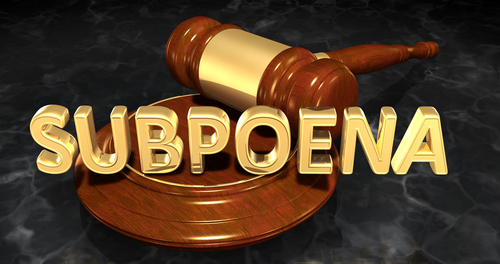 Subpoenas are court-orders compelling witnesses to appear in court to testify.

1. Legal definition of subpoenas and “subpoenas duces tecums” in Nevada

Subpoenas are only necessary for uncooperative witnesses who do not want to appear in court or produce documents. If a witness is willing to appear and promises to show up, then neither the prosecution nor defense attorney needs to formally subpoena the witness.

It is rare that judges permit parties in a criminal case to conduct depositions, which usually occur only in civil cases or federal criminal cases. But in the event a criminal deposition goes forward, Nevada residents who are served with a subpoena are required to attend only if the proceeding takes place in the county where they either: 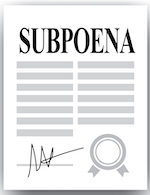 Cooperative witnesses who agree to appear in court do not need to be subpoenaed.

Meanwhile, non-Nevada residents served with subpoenas to attend a deposition are required to go only if the proceeding is within 40 miles from where they were served (or another place the court determined to be appropriate).2

2. Form and contents of Nevada subpoenas

In order for Nevada subpoenas to be legally enforceable, they have to be issued by the clerk under seal of the court or by a justice of the peace. The subpoena must contain:

Note that when prosecutors subpoena witnesses for a Nevada grand jury, the prosecutors are required to orally inform them of the general nature of the grand jury’s inquiries prior to them taking the stand.3

Subpoenas have to be properly “served” on the person being subpoenaed in order to be valid. Parties to the case may not serve the subpoenas personally. Instead, the only people who can physically deliver subpoenas are:

Note that subpoenas generally may not be served through the mail except when the subpoena is for the person to attend a misdemeanor trial in Nevada. In this case, subpoenas may be mailed — by registered or certified mail, return receipt requested — to the recipient’s last known address at least ten days prior to the beginning of the trial. Then the certificate of mailing must be filed within the court within two days after the subpoena is mailed.

Subpoenas may be served anywhere in the state of Nevada.4 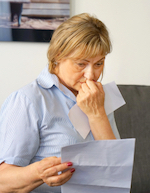 Subpoenas must be served correctly in order to be legally valid.

Witnesses can accept subpoenas either through:

Note that if the subpoena is specifically for the witness to testify at a Nevada preliminary hearing, the subpoena needs to be properly calendared with the court first.5

Also note that subpoenaed witnesses are generally entitled to a per diem fee of $25 for testifying plus mileage reimbursements.6

Whenever defense attorneys or prosecutors wish to subpoena a jail or prison inmate, they can file a “motion” with the court. This motion would include an affidavit attesting to what the inmate would testify to, and why it is material to the case.

If the judge grants the motion, it would then order the applicable sheriff to bring the inmate to court. The costs of transporting the prisoner will be paid for by the state or defendant (at the judge’s discretion).7

4. Penalties for disobeying subpoenas in Nevada

Nevada courts may hold people “in contempt” for disobeying a subpoena’s order to appear in court and/or produce evidence or documents. The penalty typically includes:

Note that if the person was found in contempt for refusing to testify at a grand jury, the court can impose a jail sentence of up to six months or until the jury is discharged (whichever is less).

The court may also order the person to reimburse the defense and/or prosecution for any expenses incurred by the disobeying the subpoena.8

Have you been subpoenaed in Nevada? Or are you facing criminal charges? Our Las Vegas criminal defense attorneys are here to discuss your rights and obligations. Call us for a FREE consultation. We will do everything to try to keep you out of custody so you can get back to your life as soon as possible.