NRS 200.120 is Nevada’s stand-your-ground law. Killing in self-defense is justifiable homicide as long as the killer:

The full language of the statute reads that:

1. Justifiable homicide is the killing of a human being in necessary self-defense, or in defense of an occupied habitation, an occupied motor vehicle or a person, against one who manifestly intends or endeavors to commit a crime of violence, or against any person or persons who manifestly intend and endeavor, in a violent, riotous, tumultuous or surreptitious manner, to enter the occupied habitation or occupied motor vehicle, of another for the purpose of assaulting or offering personal violence to any person dwelling or being therein.

2. A person is not required to retreat before using deadly force as provided in subsection 1 if the person:

(a) Is not the original aggressor;

(b) Has a right to be present at the location where deadly force is used; and

(c) Is not actively engaged in conduct in furtherance of criminal activity at the time deadly force is used.

3. As used in this section:

(a) “Crime of violence” means any felony for which there is a substantial risk that force or violence may be used against the person or property of another in the commission of the felony.

(b) “Motor vehicle” means every vehicle which is self-propelled.

James and Tom start arguing in a Las Vegas bar. Suddenly James points a gun at Tom. Tom said he does not want any trouble. James responds by cocking the gun. Tom pulls out his own gun and shoots James dead. Tom had no duty to retreat before killing in self-defense because: 1) James was the original aggressor by pulling a gun; 2) Tom had the right to be at the bar; and 3) Tom was doing nothing illegal at the bar.

NRS 200.120 is also Nevada’s castle doctrine law. Killing an intruder may be justifiable homicide if it is done in defense of:

Helen is woken up at night by the sound of someone breaking her window in her Henderson home. Helen then sees a masked and armed stranger crawl through the window. Helen takes her gun and shoots the intruder dead. Helen did nothing illegal. This is because Nevada’s castle doctrine allows people to defend their occupied home against intruders clearly intending to do harm.

In short, homicide is no crime in Nevada if done under the terms of stand your ground and the castle doctrine. Depending on the case, NRS 200.120 may be an effective defense against charges of murder (NRS 200.030) or voluntary manslaughter (NRS 200.050). 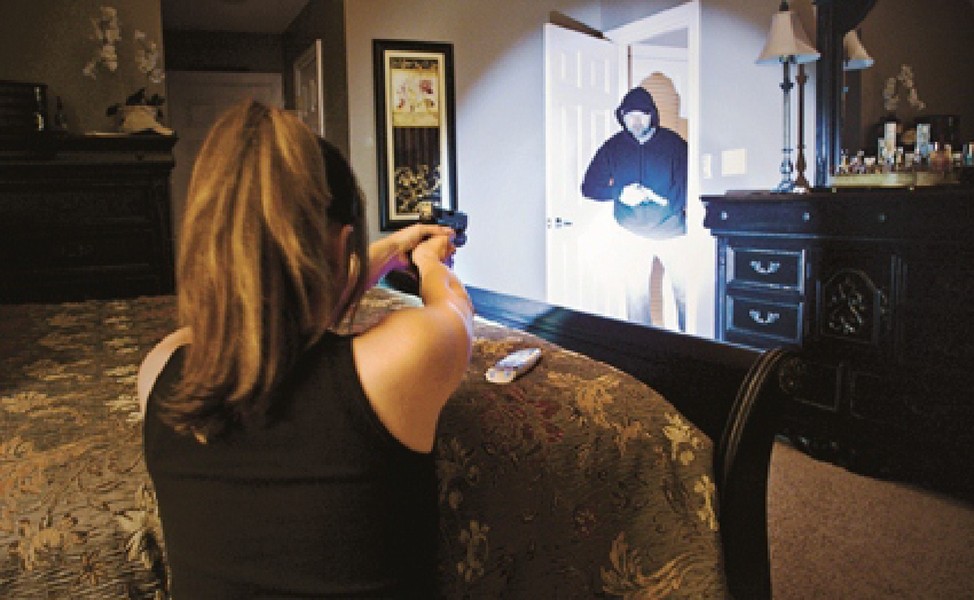 Nevada is both a “castle doctrine” and “stand your ground” state.

1. When is killing in self-defense legal in Nevada?

In general, homicide is lawful when it appears:

Nevada law also permits people to kill in defense of others, not only themselves.1

As discussed below in sections 4 and 5, the castle doctrine permits people to kill home and vehicle intruders under certain circumstances.

2. Is Nevada a “stand your ground” state?

Yes, under specific conditions. People may stand their ground and kill in self-defense if the following three criteria are met:

Therefore, the person killing in self-defense must be in a blameless position in order to stand his/her ground.

Example: Pat and Rudy are burglarizing an empty home in Henderson, where they find a stash of cash. Pat then points his gun to Rudy and says he does not want to share the loot. Instantly, Rudy grabs the gun and shoots Pat.

Here, Rudy had a duty to retreat before fighting back. Since he was breaking the law at the time by committing burglary, he waived the “stand your ground” privilege. If Rudy gets charged with murder, he might not be able to claim self-defense.

And as discussed below in sections 4 and 5, people usually do not have to retreat from their homes or cars before killing intruders.

3. Is there a duty to retreat before killing in self-defense?

Nevada is a stand your ground state. This means there is no duty to retreat before killing in self-defense if the killer:

In other words, “stand your ground” is a privilege only law-abiding people may use:

Example: Larry is walking down the street when a homeless man jumps on him and starts attacking him. Larry pulls out his pocketknife and stabs the man to death. Here, Larry had no duty to retreat because: 1) Larry did not start the fight; 2) Larry had the right to be on the street; and 3) Larry was doing nothing illegal at the time. Therefore, Larry should not face homicide charges.

And as discussed below, people usually do not have to retreat from their homes or cars before killing intruders.

4. Is Nevada a “castle doctrine” state?

Yes. This means when an intruder breaks into an occupied home or automobile, it is generally justifiable homicide for a person to kill the intruder. There is no duty to retreat under NRS 200.120, even if there is an open door or window to escape through.

Note that the home or vehicle must have at least one person in it for NRS 200.120 to apply:4

Example: Joan is walking home when she sees a stranger breaking into her sedan. There is no one inside at the time. Joan immediately takes out her gun and shoots the stranger dead. Here, the castle doctrine does not protect Joan. Since the car was unoccupied, Joan was not justified in killing the intruder. She could face murder or manslaughter charges.

In the above example, Joan could have legally killed the intruder if her child or someone else was in the vehicle at the time. (Also see our page on the difference between the castle doctrine and stand your ground.)

So if it is clear the intruder means no harm, a person could face homicide charges for killing him/her:5

Example: Jeremy is in his study when he hears footsteps in his kitchen. He grabs his gun and peeks down the hall. It is his neighbor’s young son stealing cookies off the counter. In this case, Jeremy would not be justified in shooting the boy dead. The boy was not acting menacingly enough to make any act of self-defense necessary.

As discussed above, people in their homes and cars usually have “no duty to retreat” before killing a dangerous intruder.

6. How do homicide defendants prove self-defense?

Self-defense is an affirmative defense. This means that murder or manslaughter defendants have the initial burden to present evidence that the killing was done in self-defense.

As long as there is some evidence backing up the defendant’s claims, the prosecution then has the burden to prove that the use of deadly force was unreasonable and unnecessary.6

Facing criminal charges in Nevada? Contact our Las Vegas criminal defense lawyers. We may be able to get the charges reduced or dismissed.

Call us or fill out the form on this page. All consultations are free.

Parole and Probation in Las Vegas – What’s the difference?

Duress is a potential defense to charges of any Nevada crime except first-degree murder. Defendants may raise a duress defense if they committed a crime because they reasonably believed they would be killed or severely injured if they refused.1 A classic example of duress is a thief holding up a random pedestrian with a gun ...

Can you appeal a guilty plea? A defense lawyer explains

You generally cannot appeal a conviction stemming from a plea of guilty or no contest. But you can make a motion to withdraw a guilty plea or no contest plea. If a judge grants the motion, you are then given the chance to withdraw the prior plea and substitute it with a plea of not ...