The judge, though, has agreed to hold off on implementing his ruling while the State gets ready to challenge the decision.

The magazines in question are sometimes referred to as “high-capacity magazines” and they are firearm clips that hold more than 10 rounds.

Examples of illegal acts under PC 32310 include:

In 2016, prior to the recent court ruling, the United States District Court for the Eastern District of California had ruled that PC 32310 was constitutional, after a challenge stating that it violated gun owners' equal protection rights.

Luckily, there are several legal defenses that a person can raise if accused of a crime under Penal Code 32310. These include showing that an accused party:

If the code section remains valid law, a violation of California Penal Code 32310 VC, with the exception of the offense of possession, is a wobbler offense. This means it can be charged as either a California felony or a misdemeanor.

The illegal act of possessing a high-capacity magazine is a wobblette offense, meaning it can be charged as either a California infraction or a misdemeanor. 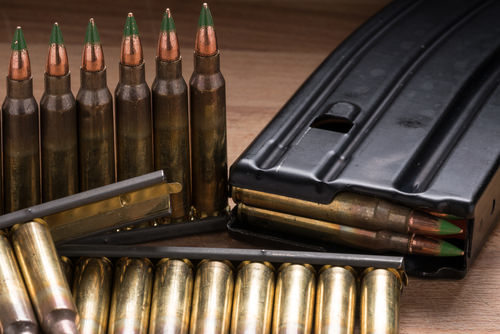 1. What is the current law regarding high-capacity magazines?

On March 29, 2019, U.S. District Judge Roger Benitez gave a court ruling that may have lifted the State ban on large capacity magazines. His decision came while hearing a case that tried to reinstate a law that allowed some gun owners to possess them.

The magazines in question have been prohibited since 2000. But, at that time, the law said that those who owned them before were allowed to keep them. In 2016, this provision was removed, meaning no gun owners could possess a large capacity magazine.

After this removal, the California branch of the National Rifle Association (“NRA”) sued and asked for the reinstatement of the provision (that was struck down in 2016). This is the case that Judge Benitez recently ruled on. At the present moment, it is unclear if he struck down:

Judge Benitez, though, has agreed to delay in his implementation of his ruling while California gets ready to challenge his decision at the 9th Circuit Court of Appeals.

At the present moment, the stay in the court ruling means that gun owners cannot buy large capacity magazines. But they can keep the magazines if they currently own them.

2. What was Benitez's reasoning?

Judge Benitez made his decision while stating that Penal Code 32310 violated Californians' Second Amendment right to own firearms.

He also provided some scenarios in which a large capacity magazine could assist someone trying to protect himself from a crime.

This reasoning comes as a surprise for those that support the ban. These people contend that the ban helps deter mass shootings.

manufactures or causes to be manufactured, imports into the state, keeps for sale, or offers or exposes for sale, or who gives, lends, buys, or receives any large-capacity magazine…1

Penal Code 32310(c) goes on to make it a crime for a person to possess a large capacity magazine, regardless of the date is was acquired.2

A “large capacity magazine” means any ammunition feeding device with the capacity to hold more than 10 rounds.3

According to California law, any of the following are not large capacity magazines:

Please note that certain people and/or situations are exempt from prosecution with regards to large capacity magazines. For example, members of law enforcement agencies may sell, transfer, or possess these ammunition holders.6

3.1. Penal Code 32310 was upheld as constitutional before recent decision

PC 32310 is a relatively new law. It arose out of California Senate Bill 1446, which Gov. Brown signed into law in 2016. The California Penal Code was amended to include PC 32310 after the signing.

Some parties challenged the new law and stated it was unconstitutional in that it violated gun owners' equal protection rights. The United States District Court for the Eastern District of California, however, recently upheld SB 1446 and PC 32310. The Court ruled that the new law is constitutional and does not violate any rights.7

A person accused under Penal Code 32310 can challenge the accusation by raising a legal defense. A good defense can often get a charge reduced or even dismissed. Please note, though, that it is critical for an accused to hire an attorney for the best defense.

This defense applies to the situation where a defendant was charged under PC 32310 following a confession.

In many PC 32310 cases, suspects are often arrested and accused after an undercover officer buys or obtains a large capacity magazine from them. Any later charges under Penal Code 32310, though, must get dropped if the officer lured a suspect into committing the crime.

This “luring” is known as entrapment. It applies to overbearing official conduct on the part of police officers, like pressure, harassment, fraud, flattery, or threats. Entrapment is an acceptable legal defense provided that the accused shows he only committed the crime because of the entrapment.

This line of defense tries to exclude evidence that is being used against a defendant for a PC 32310 violation.

If a person was stopped or arrested without probable cause, then any evidence obtained following the improper stop/arrest could get excluded from the case. The exclusion of evidence regarding large capacity magazines could result in the dismissal or reduction in charges.

A violation of PC 32310 can result in jail time

A violation of Penal Code 32310, with the exception of possessing a large capacity magazine, is a type of wobbler offense. This means it can be punished as either a California misdemeanor or a felony.

If charged as a misdemeanor, the crime is punishable by imprisonment in a county jail for up to one year.8

If charged as an infraction, the crime is punishable by a fine not to exceed $100 per each magazine.10

There are three crimes related to illegal acts with large capacity magazines. These are:

Penal Code 25400 PC, California's carrying a concealed weapon law, makes it a crime for a person to carry a concealed firearm on his person or in his vehicle.12

Further, a person must know that he is concealing a gun to be guilty under PC 25400.13

California Penal Code 25850 PC makes it a crime to carry a loaded firearm in a vehicle or public place.15

A “public place” is any place which is open to common and general use and is readily accessible by anyone wishing to go there.16

As with the crime of carrying a concealed weapon under PC 25400, most Penal Code 25850 crimes will be charged as misdemeanors. If so, they are punishable by:

However, as with charges under PC 25400, acts of carrying a loaded weapon can be charged as a felony if certain aggravating factors are present in a case.

assault weapons and BMG rifles, except in very specific circumstances.18

The penalties for violating PC 30600 will vary from minor infractions to very severe felonies. These are punishable by both a fine and/or a prison term. The specific penalty will vary depending on the specific act a defendant commits and the underlying facts of the case.

Were you accused of a crime involving a large capacity magazine in California? Call us for help…

Call us for help at 855-LAWFIRM

If you or someone you know has been accused of a crime per Penal Code 32310, we invite you to contact us for a free consultation. We can be reached 24/7 at 855-LawFirm.