Police-induced coerced confessions have been found to lead to suspects confessing to crimes they did not commit.

State and federal courts generally exclude from evidence confessions that are found to be involuntary. Inadmissibility stems from the federal constitution’s Due Process Clause of the Fourteenth Amendment and state laws.

There are two main types of police interrogation techniques that are considered coercive. These are when police officers use the following:

Suspects may confess to a crime that they did not commit because: 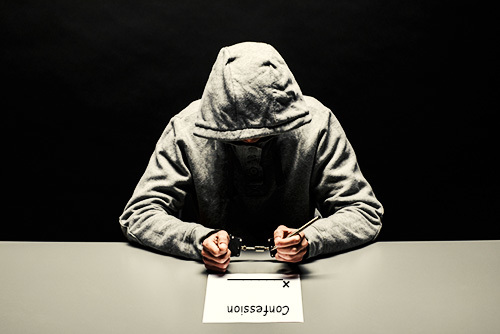 A coerced confession is an involuntary confession that comes from overbearing police conduct rather than a criminal defendant’s free will.

1. What are the three types of coerced confessions?

There are three main types of coerced or false confessions in the criminal justice system. These are:

These are most often prompted by a psychiatric disorder that warp’s a suspect’s sense of reality. For example, a suspect may confess because a disorder creates:

Note that a person may also make a confession voluntarily to protect someone else.

These occur when a suspect confesses because he/she just wants to end:

These are “compliant” because law enforcement tries to get suspects to agree with them that the accused “did it.”

A persuaded false confession takes place when an accused begins to doubt his/her own memory. The person then becomes temporarily persuaded by the police that: 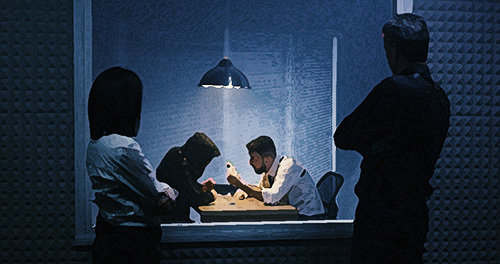 There are two main types of police interrogation tactics that are considered coercive and impermissible. These include the use of:

Note that, while questionable, the following are permissible tactics:

Sometimes the police, wrongfully and unlawfully, try to coerce a confession with physical abuse.

Example: The police suspect John of possessing an unregistered firearm in the State of Illinois. John denies any allegations of having the gun. Officers throw the man down to the ground and repeatedly kick him in the stomach and groin. The police also threaten to kill John if he does not confess to having the gun. John lies and says that he had the firearm.

Here, the police used the coercive tactic of physical abuse to obtain a false confession.

Note that the above facts are from a real court case where the confession was thrown out of evidence.1

Authorities are prohibited from using physical abuse to secure a confession.2

Psychological abuse is when the authorities try to get a confession by using:

Specific examples may include:

Police also engage in psychological abuse when they try to wear an accused down via:

Note that the following suspects are particularly susceptible to psychological tricks:

Example: Police suspect that Ben, age 18, murdered a man by strangling him. Ben is young, is a high-school dropout, and has an abusive background. The police question him about the killing. Ben was found nowhere near the crime scene after the murder took place.

During the questioning, Ben exercises his Miranda rights and asks for a lawyer nine times. The police deny every request. They challenge Ben’s educational level and background. They also keep telling him that he will get a reduced sentence if he cooperates. The police also deny him food and water. Ben eventually confesses.

Here, Ben’s attorney has a good chance of getting the confession thrown out of court. The police denied him his Miranda warnings, denied him food and drink, and took advantage of his troubled background.

2.3. What tactics are allowed?

There are certain interrogation techniques police use that at times seem borderline coercive. These include:

These, though, are not coercive techniques.

Deception and persuasion are allowed so as the tactics do not proximately cause a confession.6

Further, it is permissible for police officers to try and befriend an accused. Suspects, though, should never believe that law enforcement wants to become a friend during an interrogation. An interrogator does not ask questions to start up a friendly chat.

3. What happens when police coerce a confession?

The U.S. Constitution, state constitutions, and court opinions all say that coerced confessions are inadmissible at trial.

In particular, involuntary confessions are prohibited by the federal constitution’s Due Process Clause and similar state statutes.

According to the Supreme Court of one state:

“It is axiomatic that the use in a criminal prosecution of an involuntary confession constitutes a denial of due process of law under both the federal and state Constitutions.”7

Note that the U.S. Supreme Court has even ruled that a:

In order for a confession to be held admissible at trial:

To determine whether a confession was voluntary, a court considers all of the facts surrounding the confession.10 This test is known as the “totality of the circumstances” test.

Law enforcement in New York City arrest Lisa and conduct a police interrogation about the sale of drugs and Lisa’s involvement in the conspiracy. The police questioning lasts for over four hours. After an hour, Lisa tries to invoke her Miranda rights and asks for counsel. But the authorities deny the request. They also use certain interrogation techniques in which the police officers play emotional games with her. They deny her requests for food and water and any breaks. They try to use the polygraph results to say she will receive a lesser sentence if she confesses to the conspiracy.

Lisa ultimately breaks down. In a last-minute attempt to stop the madness, she lies and confesses to the conspiracy. The district attorney uses it at her trial in to obtain a wrongful conviction of conspiracy to sell and transport drugs.

Here, Lisa’s defense attorney should have challenged the district attorney’s use of her confession. Based on the totality of the circumstances, there is a strong argument that her confession was not voluntary. This is supported by the following facts:

4. Why do people confess to crimes they do not commit?

There are three main reasons a suspect might confess to a crime he/she did not commit. These are:

A plea bargain is when:

A defendant may confess to enter a plea and gain the benefits of a more relaxed sentence.

Example: Jenny is charged with assault with a deadly weapon. The district attorney is seeking to charge her with a felony and put her in state prison for four years. Jenny has denied the charge ever since she was first suspected of the crime.

Prior to the criminal trial in her criminal case, the district attorney approaches Jenny’s defense attorney and states he will reduce her charge to simple assault if she pleads guilty to the offense. Assault is punishable as a misdemeanor and carries a maximum sentence of six months in county jail.

Here, Jenny may accept the deal and plead guilty to the simple assault charge. This is because she will reduce the risk of going to trial and being found guilty beyond a reasonable doubt of a more serious charge that carries a more severe sentence.

As stated above, law enforcement officers often use deception in trying to obtain a confession. This includes lying, especially about physical evidence and forensic evidence.

For example, officers may say they have:

Further, during police questioning, officers may lie and say that a confession will result in a more relaxed sentence.

Sometimes suspects confess to a crime they did not commit because:

Defendants often give false confessions for the purpose of ending an interrogation.

The reality is that police questioning can sometimes be brutal. Police may utilize sophisticated or tricky interrogation processes that wear down people suspected of a crime.

Questioning can take place over several hours. Sometimes an interrogation can even spread across the course of several days.

Innocent people may grow tired and weak in response to this extended pressure and stress. This means they may confess to a crime simply to end the intense duress.

5. How common are false confessions?

False confessions are unfortunately common across all states in the U.S.

According to the Innocence Project, approximately 25% of convicted criminals that resulted in exonerations, were convicted via a coerced confession.11

Considering the vast array of possible charges in the criminal justice system, coerced confessions are most apparent in homicide cases.12

Statistics also show that young offenders (in comparison to adults) are more prone to confessing to crimes that they did not commit.13

The following facts and figures are of further interest:

6. How can a defense lawyer help?

There are two main ways that a criminal defense law firm can help in cases involving coerced confessions.

First, they can help prevent them. If a suspect is subject to police questioning, it is critical that he/she exercises his/her Miranda rights. This means that the suspect must refuse to answer any questions until he/she has the opportunity to speak to a criminal defense attorney.

Every suspect has the right to speak with a lawyer prior to answering any questions asked by police. The exercise of this right can:

Second, if an involuntary confession was given, a defense attorney can file a suppression motion seeking to exclude it from evidence. As stated above, a confession can only be admitted into evidence if it was given voluntarily. Further, this is determined by examining the “totality of the evidence.”

A skilled criminal defense lawyer can seek to:

For additional guidance or to discuss your confession case with a criminal defense attorney, we invite you to contact us at Shouse Law Group.

Burglary (California Penal Code 459 PC) is defined as entering a room, structure, or vehicle, with the intent to commit a theft within. Whether the offense is a misdemeanor or a felony will depend on what type of structure was broken into. Burglary charges and their penalties vary depending on several factors. 1) Theft of ...

Can I lose my Calif driver’s license because of vision problems?

Can an employer reduce or take away my commission in California?

What is a 602 appeal in the California prison system?