Why does eating before drinking reduce a BAC? 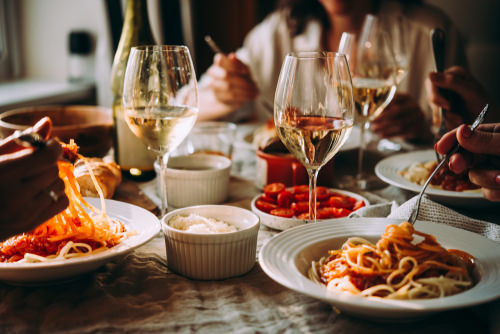 Eating before, or during the course of drinking, slows the rate at which alcohol is absorbed into a person’s body.

Eating before, or during the course of drinking, slows the rate at which alcohol is absorbed into a person's body. This decrease in absorption means less alcohol enters the bloodstream, as compared to the situation when no food is eaten. Less alcohol entering the bloodstream results in a lower blood alcohol concentration (“BAC”).

Other factors that may affect a party's BAC include:

BAC is the measure of the amount of alcohol in someone's bloodstream. Blood alcohol concentration is expressed as a percentage – for instance .08%. The higher the number, the more alcohol there is in a person's bloodstream.

California's “legal limit” for BAC depends on the driver's age and the type of vehicle driven. A common legal limit that leads to a “DUI per se “charge in California is .08% for adult drivers (of non-commercial vehicles).

Eating food, either before or while drinking, essentially slows absorption rates. Slower rates mean that less alcohol enters a person's bloodstream (when compared to a drinker that does not eat). This reduction of alcohol in the blood translates into reduced levels of blood alcohol concentration.

In fact, some studies have shown that a non-eating drinker's BAC can be as much as three times higher than a similar drinker who has eaten prior to consuming alcohol. Eating food prior to drinking, especially food high in protein, has been shown to stop people from getting too drunk too fast.

What are some other factors that may affect a person's BAC levels?

Several factors can affect a party's BAC levels when drinking. Some of the more popular include:

What exactly is blood alcohol concentration?

BAC is the measure of the amount of alcohol in someone's bloodstream. BAC is commonly used to try to establish whether someone is driving under the influence. Blood alcohol concentration is expressed as a percentage – for instance .08%. The higher the number, the more alcohol there is in a person's bloodstream.

Does BAC indicate whether someone is drunk?

Blood alcohol content does not, by itself, determine whether someone's driving will be impaired by alcohol. Some people may be impaired at a relatively low percentage, while others may be able to drive safely with a relatively high BAC.

But regardless of actual impairment, drivers may not lawfully drive in California once their BAC exceeds a certain level. This amount is sometimes referred to as California's “legal limit” for alcohol--also known as the “per se” DUI limit.

What is California's per se “legal limit” for blood alcohol?

California's “legal limit” for BAC depends on the driver's age and the type of vehicle driven. Common legal limits that lead to “DUI per se “charges in California include:

Can someone be under the influence with a BAC below California's “legal limit”?