Roundup lawsuits are mass tort cases against Monsanto and Bayer for the health effects of the popular herbicide Roundup. Studies have discovered that excessive exposure to the chemicals in Roundup can cause a variety of cancers, including non-Hodgkin's lymphoma. Victims have filed lawsuits against the makers of Roundup, claiming that they failed to warn consumers of the dangers posed by the weed killer.

Shouse Law Group is currently accepting cases involving people who used Roundup (with at least 8 hours of direct exposure) and were diagnosed with one of the following:

In this article, our products liability and defective drug attorneys describe the chemicals used in Roundup, and how they can be dangerous to people who are exposed to them on a regular basis. We will then look at the medical conditions that excessive exposure can cause, and the symptoms that indicate something is wrong. Finally, we will look at the lawsuits currently pending against Monsanto and Bayer concerning Roundup exposure, and explain what you can do if you think you have been hurt by Roundup, as well. 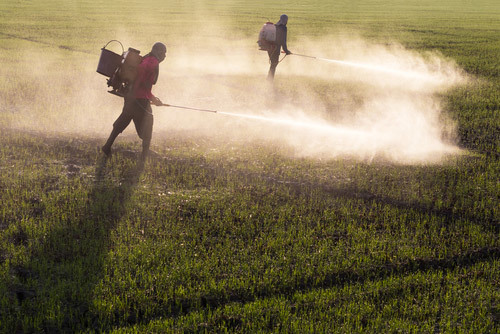 Roundup is used on an industrial scale by many who are frequently exposed to the chemical for several hours every day.

1. Roundup and the chemical glyphosate

Roundup is a popular weed killer. Most people are familiar with Roundup in its consumer form – a spray bottle that they can use to kill weeds on their lawn or that grow between cracks on their walkway, patio, or driveway. However, Roundup is also used on an industrial scale by landscapers, groundskeepers, and farmers, who are frequently exposed to the chemical for several hours every day.

Roundup is based on the chemical glyphosate, a compound that was discovered by the company Monsanto in 1970 to kill weeds. The company then patented the compound and marketed it as an herbicide. Monsanto then raced to develop genetically engineered seeds that were tolerant to glyphosate. These “Roundup Ready” crops allowed farmers to spread Roundup on their fields well after the plants had sprouted without killing them, drastically increasing the amount a farmer could harvest.

The development of glyphosate as an herbicide led to numerous awards for the Monsanto chemists behind its discovery. Roundup and Roundup Ready crops form a substantial chunk of Monsanto's business, and were a driving force behind the pharmaceutical giant Bayer's purchase of Monsanto for $66 billion in 2018.1

2. The dangers of Roundup and glyphosate

While scientific studies initially found that Roundup and its active ingredient glyphosate did not pose a danger to humans, more recent studies have come to the opposite conclusion.2

The contemporary findings have led the International Agency for Research on Cancer (IARC), a part of the World Health Organization, to publish a report that categorized glyphosate as a Class 2A carcinogen, meaning it was “probably carcinogenic to humans.”3 Worse, the IARC found a “positive association” between glyphosate and non-Hodgkin lymphoma.4

France has even banned the use of Roundup – a court revoked the approval that Roundup had received from the country's environmental agency.5

3. How exposure can happen

Exposure to Roundup can happen in three ways:

However, there seems to be an increased risk for cancer and non-Hodgkin lymphoma with constant or intense exposure to Roundup. People who seem to be especially at risk include:

Many of these people are exposed to large amounts of Roundup and glyphosate every day.

There are indications that excessive exposure to Roundup and glyphosate can cause a wide variety of medical conditions and complications, including:

The scientific evidence against Roundup is strongest when it comes to blood cancers like non-Hodgkin lymphoma, leukemia, and multiple myeloma. Numerous studies using data spanning decades have found that exposure to Roundup and glyphosate could double or even triple the risk of developing non-Hodgkin lymphoma.6

Symptoms of these medical conditions include:

As of April 15, 2019, there were 899 lawsuits consolidated in the MDL in the Northern District of California

Since the IARC declared that glyphosate was a Class 2A carcinogen and people realized that their medical condition could be the result of Roundup poisoning, numerous lawsuits have been filed against Monsanto and Bayer. These lawsuits claim that Monsanto, and its subsequent purchaser, Bayer, knew or should have known about the dangers posed by Roundup and glyphosate, but failed to warn consumers about those dangers and even actively covered them up. As a result, people have developed serious and potentially even fatal diseases through no fault of their own.

Because there are so many potential victims, and because they all likely got hurt doing the same or similar things, courts have handled Roundup lawsuits like a mass tort claim. All lawsuits alleging injuries from exposure to Roundup have been consolidated in multidistrict litigation (MDL) in the Northern District of California for pre-trial proceedings.7

As of April 15, 2019, there were 899 lawsuits consolidated in the MDL in the Northern District of California.8

Defendants Monsanto and Bayer were denied summary judgment in July, 2018, after the court decided that a reasonable jury could reach the conclusion that they were liable for the ill effects of Roundup.9

Bellwether trials were set to begin in February, 2019.10

One of those bellwether trials, Hardeman v. Monsanto, was brought by a California landowner who used Roundup for 26 years to control weeds and poison oak on his property. In a huge blow to Monsanto and Bayer, the jury unanimously decided that Roundup was a “substantial factor” in causing his non-Hodgkin lymphoma.11 The decision was devastating for Monsanto and Bayer because the victim had used Roundup in a residential setting, not an industrial one, suggesting that even casual users of Roundup would still be awarded compensation in a lawsuit.

The verdict came hard on the heels of a Roundup lawsuit that was not a part of the MDL – a case that ended with a $289 million verdict against the defendants.

In that case, a 46-year-old school groundskeeper claimed that his constant use of Roundup on the job caused him to develop non-Hodgkin lymphoma. His trial was expedited because doctors did not expect him to live to age 50. Jurors awarded him $39 million in compensatory damages, and $250 million in punitive damages.12 That verdict was subsequently lowered to $78 million after the trial.

Together, the huge verdicts against Bayer and Monsanto are likely to trickle down to the other cases in the MDL, which are now likely to settle for far higher amounts.

Additionally, the publicity that came with these verdicts led to a huge spike in the number of cases being filed for Roundup poisoning.

6. What to do if you have suffered from the effects of Roundup exposure

If you have some of the symptoms of Roundup and glyphosate exposure, the first thing to do is see a doctor. There are tests that can be done to determine if you have developed non-Hodgkin lymphoma or one of the other effects of Roundup exposure. Seeing a doctor promptly is important because it can minimize the damage with quick medical care.

If a doctor has determined that you have non-Hodgkin lymphoma or another medical condition that has been linked to Roundup and glyphosate, you can discuss your case with an attorney. By invoking your rights to compensation, you can recover the financial help you will need to pay for your medical expenses and care for your family while you fight the disease.

Talking with a lawyer soon after being diagnosed, though, is very important. Most states' statutes of limitations require a lawsuit to be filed within two years of the injury or diagnosis.

If you or someone you love has been hurt by Roundup, call the personal injury, products liability, and mass tort attorneys at the Shouse Law Office at 855-LAWFIRM for the legal representation you need.