Many people are unaware that so-called “service dog fraud” is a fraud crime in California.

Service dog fraud—sometimes referred to as “fake service dogs”—basically refers to the act of falsely claiming to be the owner or trainer of a service dog.1

Like disabled parking placard fraud, the crime of service dog fraud is typically committed by people who are trying to access some of the rights that California law grants to the disabled. These rights include: 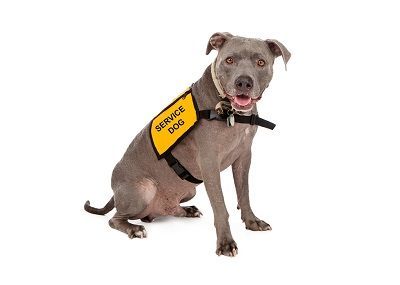 Service dog fraud is on the rise--and is of increasing concern to California law enforcement.

Under California Penal Code 365.7, the legal definition of service dog fraud is knowingly and fraudulently representing yourself, verbally or in writing, to be the owner or trainer of a:

“Fraudulently” means that you are acting with bad faith, dishonestly, a lack of integrity or moral turpitude.4

Example: Arnold has recently become blind due to the complications of diabetes. He has had a golden retriever named Sunny for years. After he goes blind, he gets a second golden retriever—this one a trained guide dog named Rex. Rex accompanies Arnold on errands in his neighborhood.

One day when Arnold is getting ready to go grocery shopping, he accidentally puts a leash on Sunny instead of Rex. He walks with Sunny to the grocery store and takes her inside.

A store employee asks if Sunny is a service dog. Arnold assures the employee that she is, because he thinks she is Rex.

Arnold incorrectly represented Sunny as a guide dog. But he is not guilty of PC 365.7 service dog fraud because he did not do so knowingly or in bad faith. 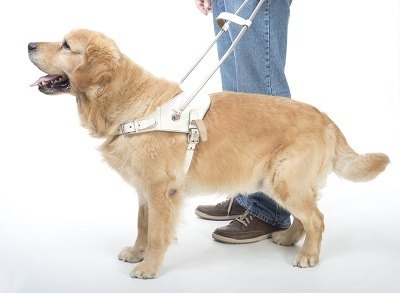 Guide dogs for the blind are among the most familiar kinds of service dog.

A “guide dog” is a trained seeing-eye dog for the blind. A “signal dog” is a dog trained to alert a deaf person, or anyone whose hearing is impaired, to intruders or sounds.5

A “service dog” is any dog individually trained to do work or perform tasks for the benefit of an individual with a disability, including (but not limited to) tasks like:

Example: Sally badly injures one of her legs playing tennis and needs to use a knee scooter for several months.

She decides to try to find a silver lining in her situation. After learning from a friend that anyone can order a service dog vest online, she orders a vest for her poodle Nina.

Sally puts the vest on Nina and takes her everywhere she goes, including restaurants. When asked, she tells people that Nina is trained to pick things up for her when she drops them. In reality Nina has no special training.

What kinds of disabilities can service dogs help with?

The definition of “disability” under California law, for purposes of the state's “fake service dogs” law, is fairly broad. It includes both physical disabilities and mental disabilities—which means any mental or physiological disorder that limits a major life activity.7 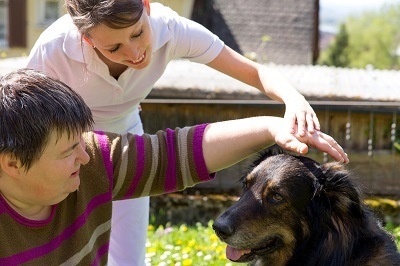 Examples of mental disabilities for which one could have a service dog include:

“The broad definition of a ‘disability' makes California's service dog law tricky to enforce. The definition of ‘service dog' today is much more complicated than the old image of a seeing-eye dog leading around a blind person. These days there are many people with legitimate mental disorders that aren't readily apparent, such as depression and PTSD, and some of these people receive enormous help from specially-trained service or companion dogs. Unfortunately many business owners and law enforcement officials don't understand this—and are likely to unfairly accuse these people of service dog fraud.”

Service dog fraud is a misdemeanor in California law.10 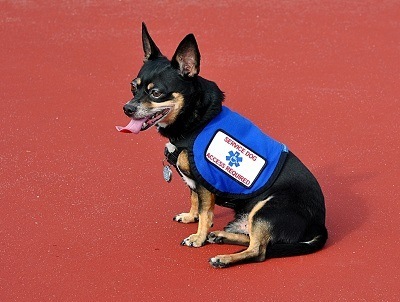 The difficulty in figuring out which service dogs are "fake service dogs" can lead to innocent people being accused of service dog fraud.

California state officials have recently been paying more attention to the perceived problem of service dog fraud.12 This means, of course, that enhanced efforts to enforce the law against fake service dogs will lead to innocent people being wrongfully accused of this crime.

If this happens to you, a California criminal defense attorney can help you craft a legal defense strategy.

Maybe your dog actually is a legitimate service dog—but because your disability is mental rather than physical, the officer who arrested you for this offense did not understand this, and did not believe you when you tried to explain it to him/her.

Even if your dog is not a legitimate service dog, you may have incorrectly believed that s/he was.

For example, maybe you suffer from a mental or emotional disorder and have a dog who helps you with your symptoms—but you do not have a formal diagnosis, and the dog is not specially trained.

In this case, you would not have committed service dog fraud “knowingly” or “fraudulently”—and so would not be guilty.13

For questions about the crime of Penal Code 365.7 PC service dog fraud, or to discuss your case confidentially with one of our California criminal defense attorneys, do not hesitate to contact us at Shouse Law Group.

3 Penal Code 365.7 PC – Knowing and fraudulent representation as owner or trainer of guide, signal or service dog; penalty, endnote 1 above.

5 Penal Code 365.5 PC – Blind, deaf or disabled persons; public conveyances or accommodations; penalties [definitions referenced in fake service dogs law]. (“(d) As used in this section, “guide dog” means any guide dog or Seeing Eye dog that was trained by a person licensed under Chapter 9.5 (commencing with Section 7200) of Division 3 of the Business and Professions Code or that meets the definitional criteria under federal regulations adopted to implement Title III of the Americans with Disabilities Act of 1990 (Public Law 101-336)1. (e) As used in this section, “signal dog” means any dog trained to alert a deaf person, or a person whose hearing is impaired, to intruders or sounds. (f) As used in this section, “service dog” means any dog individually trained to do work or perform tasks for the benefit of an individual with a disability, including, but not limited to, minimal protection work, rescue work, pulling a wheelchair, or fetching dropped items.”)

9 Our Glendale criminal defense attorneys have been featured as a legal expert on CNN Headline News and CBS News. We have won favorable outcomes for our clients in cases ranging from murder and drug trafficking to misdemeanors like disabled placard and service dog fraud.

10 Penal Code 365.7 PC – Knowing and fraudulent representation as owner or trainer of guide, signal or service dog; penalty, endnote 1 above.

13 Penal Code 365.7 PC – Knowing and fraudulent representation as owner or trainer of guide, signal or service dog; penalty, endnote 1 above.