Nevada law permits police to use deadly force such as gunfire in very limited circumstances, including:

Families of victims killed by police using deadly force can sue law enforcement for wrongful death in Nevada and Section 1983 civil rights violations in Nevada. Plaintiffs may be eligible to recover compensatory damages for such expenses as:

If the police's use of lethal force was malicious or especially shocking, the court can also award punitive damages. 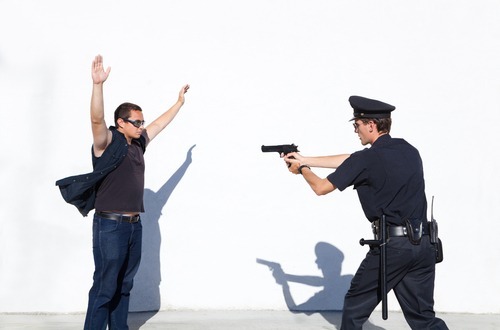 Nevada police may employ deadly force against suspects only when necessary, such as in self-defense.

1. When "deadly force" by Nevada police is lawful

Police may legally inflict lethal force on another in the following situations when necessary:

1.1. Deadly force to make an arrest

Nevada law permits police to use lethal force when necessary in attempting to lawfully apprehend or arrest a person.1 Logically, deadly force should not be necessary unless the arrestee is dangerous (as discussed below in sections 1.2 and 1.5).

If the arrestee is resisting, officers are encouraged to use verbal warnings or, if appropriate, "intermediate force" to subdue the suspect, such as tasers, pepper spray or batons.2

Nevada law permits police to use lethal force if a suspect is trying to escape arrest if:

In short, the suspect must be dangerous in order for police to use lethal force to prevent an escape.3 Henderson criminal defense attorney Michael Becker gives an example:

Police can use deadly force to stop a dangerous suspect from fleeing.

Example: A Henderson Police Department police officer see a teenager swiping an iPhone from Best Buy. The officer approaches him, and the teen -- who appears unarmed -- runs away. The officer cannot keep up with him, so he shoots the teenager in the thigh. Here, the officer's use of deadly force in preventing the teen's escape was unjustified because his theft crime was not a violent felony, and the teen did not appear dangerous.

Had the teen in the above example committed an armed robbery instead of mere shoplifting, then the officer might have had sufficient justification to shoot because robbery does involve the infliction or threat of serious bodily harm.

Nevada law permits police to use lethal force when necessary in retaking an escaped inmate who has been either:

Therefore, police may not use lethal force on an escaped inmate who committed only a misdemeanor (unless the inmate is posing a threat of serious bodily harm, as discussed in subsections 1.2 and 1.5). But even if the escaped inmate has committed a felony, police may use lethal force only when necessary.4 Pahrump criminal defense attorney Neil Shouse provides an illustration:

Example: A convicted murderer escapes Ely State Prison. Officers find him unarmed in the desert and surround him. The convict appears to surrender, but then one of the officers shoots him dead. Here, the officer's use of deadly force was probably unjustified because it was not necessary to capture the convict: He had already surrendered and was surrounded by police.

Had the convict in the above example been armed and resisting capture, then lethal force arguably would have been necessary to capture him.

1.4. Deadly force to suppress a riot 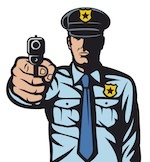 Police may use lethal force if necessary to keep the peace.

Nevada law permits police to use lethal force when necessary in lawfully suppressing a riot or preserving the peace.5 Presumably, this applies to violent and chaotic uprisings that threaten the health and safety of the public. Angry protests and demonstrations that are otherwise safe do not justify lethal force.

1.5. Deadly force in self-defense (or defense of others)

Nevada law permits police to use lethal force when necessary in protecting against an imminent threat to the life of a person.6 In this way, police share the same rights to self-defense and defense of others that civilians do. Reno criminal defense attorney Michael Becker gives an example:

If the gang member in the above example was not holding a weapon, then the officer would have no legal justification to fight back at all.

Victims of excessive police force -- or family of victims killed by a police officer -- may file a complaint with the officer's police department. The department's review board will then conduct an "internal affairs (IA) investigation" into the matter.

It is strongly encouraged that people seek an attorney's assistance in completing an IA complaint form. An attorney can help compose the complaint in such a way that may help the victim or victim's family's chances of recovery money in a civil suit.

Police under an IA investigation may be disciplined, suspended, or fired.

Note that Nevada law may give the police permission to use deadly force in certain situations when necessary, but the law never requires deadly force. So whenever an officer does shoot to substantially injure or kill, the officer's judgment should always come under strict scrutiny by victims, their families, police departments, and society at large.

An unjustified homicide by police opens the door for various civil lawsuits, including:

Note that victims who are injured but not die from excessive police force can sue for battery.

"Wrongful death" has four elements that the victim's family ("plaintiff") would need to prove in order to prevail in court over the police ("defendant"):

Proving wrongful death -- which is a civil cause of action -- is very different from proving the criminal charges of murder or manslaughter. The plaintiff does not have to show premeditation or intent to kill. Instead, the plaintiff has to show that the plaintiff's behavior -- whether willful or accidental -- resulted in the death.7

Plaintiffs in wrongful death suits may be able to recover compensatory damages for:

Courts consider such factors as the decedent's age, salary, profession, and health when determining loss of financial support, if any.

Courts can also award punitive damages if the courts find the defendant's behavior to be malicious or otherwise egregious. Depending on the case, punitive damages can be as much as three times the compensatory damages or more.

People whose civil rights were violated can sue under Section 1983.

Section 1983 of the United States Code title 42 provides people (or their estates) a way to sue law enforcement for violating their civil rights.8 Arguably, there is no civil rights violation more grievous than inflicting serious bodily harm or death.

Note that only city, county, or state police employees can be sued under Section 1983. Federal police can be sued through a "Bivens" lawsuit, which is like a federal version of a Section 1983 lawsuit.9

The victim's estate may be able to recover certain compensatory damages such as any medical costs the decedent may have incurred from his/her injury before dying. If the decedent has a family, the court may also award loss of future earnings. However, it is unclear whether Nevada courts would award pain and suffering damages for a deceased plaintiff.

The defendant(s) may also be ordered to pay attorney's fees and, depending on the case, punitive damages.10

Possible defendants in wrongful death or Section 1983 lawsuits stemming from a police officer's use of deadly force may include:

Even though an individual officer may have inflicted the damage, it may be possible to prove that the police department is liable as well. And since police officers do not usually have much money saved, suing the department is often the best chance at winning substantial financial damages.

Police facing wrongful death or Section 1983 lawsuits may raise various defenses in an attempt to escape liability for using deadly force. Some of their arguments may include:

In any case, the police would try to argue that any reasonable person in their position would have reacted the same way.

Police may be immune from Section 1983 prosecution.

Additionally, police will claim that they have "qualified immunity in Nevada" that shields them from liability. But although police normally are protected from prosecution, plaintiffs may be able to get around immunity by showing that the police did not execute their job duties in "good faith."11

6. Statute of limitations in "deadly force" lawsuits against Nevada police

The statute of limitations for bringing a wrongful death lawsuit is two (2) years after the death. The time limit for bringing a Section 1983 case is not as clear, but it presumably two (2) years after the police's infliction of deadly force or the victim's death. Every case is different, so plaintiffs are encouraged to consult with an attorney to help calculate the correct statute of limitations in their particular matter.12

If your loved one was killed by law enforcement in Nevada, call our Las Vegas personal injury attorneys at 702-DEFENSE (702-333-3673). Often we can achieve substantial settlements through negotiation. But if necessary, we are prepared to take the matter to trial to fight for the highest compensatory and punitive damages possible.

Also see our article on suing for police misconduct in Nevada.