Patrons injured at a Nevada concert may have grounds to file a lawsuit to recover compensatory damages. Parties liable for the injuries may include the promoter, facility owner, musical act, security company, food or merchandising vendor or even another concertgoer.

Common causes of injuries at Nevada concerts include:

A major issue in Las Vegas right now is whether MGM Resorts (parent company of Mandalay Bay) and others may be liable for injuries and deaths suffered at the Las Vegas Massacre on October 1, 2017. Such liability could be based on a failure adequately to screen guests and their luggage, and a failure to respond quickly enough to initial gunfire by the shooter Stephen Paddock.

To help you better understand how to recover damages for concert injuries in Nevada, our Las Vegas Nevada personal injury lawyers discuss, below: 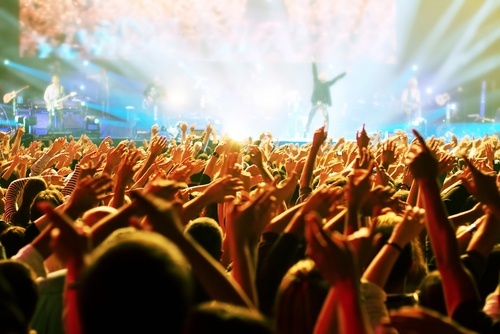 1. Who can I sue if I am injured at a concert in Las Vegas?

Normally, when someone is injured by a wrongful act in Nevada, the person who caused the injury is the right person to sue for damages.

However, in a concert situation, Nevada's vicarious liability laws may make another party responsible. Parties that may be vicariously responsible for injuries at a concert include:

Example: Leanne is attending a concert by her favorite band at a Las Vegas sports stadium. The singer tells the crowd "I want to see you move!" People start waving their hands. "More! Faster!" the singer cries. People start pressing toward the stage. The sound man turns the singer's mic up louder. "Come on!" the singer shouts. A number of security guards climb onto the front of the stage and form a wall to protect the band, but do nothing about the crowd.

In the rush, Leanne is pulled down and trampled. She sustains several fractured ribs and a brain injury. Leanne's lawyer files a lawsuit against (a) the band (for negligently inciting a panic), (b) the sound company (for not cutting the mic), (c) the security company (for the negligence of its employees), and (4) the venue owner and promoter for providing inadequate security. Leanne settles out-of-court with three out of the five companies, netting her a settlement of more than $1,000,000.00.

2. How do I recover damages for an injury at a Nevada concert?

To recover compensatory damages in a Nevada personal injury case, the first step is to find out who may be responsible.

Our team of investigators and proactive Las Vegas injury attorneys will review the case, including:

We will then usually send a demand letter to all companies that may be liable to open a dialogue. In some cases, it may be possible to obtain an out-of-court settlement for your Nevada concert injuries fairly quickly.

In other situations, especially where the Nevada statute of limitations for a personal injury case is running out, we may need to file a lawsuit This can preserve the statute and to let the other party know we are serious.

But even of we file a lawsuit for Las Vegas concert injuries, the case may still settle out-of-court and without the need for a trial.

3. How much can I recover for my Nevada concert injury?

The amount you can recover for injuries at a concert in Nevada depends on their nature and extent as well as on who is liable.

In general, however, if another party was at fault for your injuries, you may be entitled to:

4. What if I was partially to blame for my injury at a Nevada concert?

You may still be able to recover damages under Nevada's modified comparative negligence law, even if you were partly at fault for a concert injury.

As long as another party or parties was primarily (at least 50%) to blame, you can recover a portion of your damages.

5. What if I was injured by another concertgoer in Nevada?

Filing a lawsuit when you are injured by another concertgoer in Nevada can present challenges. Often you will not know the other person's identity. He or she may be from out of town or may not have the assets or insurance to satisfy a judgment.

But concert promoters and venue owners have a duty to make their premises reasonably safe for their patrons. When injuries happen, it is often because there was inadequate security or the owner was responsible under Nevada's premises liability laws.

Example: Kelly goes to see several bands perform at a large concert venue at a hotel on the Las Vegas strip. The security check outside the venue is understaffed. As a result, there is still a large crowd waiting to get in when the first band goes on. People in line start pushing and shoving. Security goes on checking purses as if nothing had happened, even after Kelly falls downs. Someone steps on Kelly's hand and fractures it in several places. Even though Kelly has no idea who caused the fight, there are several parties with deeper pockets who may be liable:

6. What if someone injured me intentionally at a Las Vegas concert?

Most people who work at or attend concerts are there for the right reasons. But sometimes, crowds, alcohol and excitement can lead people to break the law or commit acts they otherwise wouldn't.

If you were the victim of a wrongful act such as assault, sexual assault, a hate crime or discrimination, you may be able to file a lawsuit for an intentional tort in Nevada. You may also be able to recover punitive damages, or additional damages for the intentional infliction of emotional distress.

The best thing to do if you are a victim of such an act is to contact both the police and your Las Vegas personal injury attorney.

Even though you and the police are on the same side, your interests are slightly different. Calling a Nevada personal injury lawyer after a concert injury gives you the best chance of holding someone with insurance responsible.

7. Filing a lawsuit when someone is killed at a Nevada concert

If someone in your family was killed while attending a concert in Las Vegas or Reno, you may be able to recover damages in a Nevada wrongful death suit. Such damages may include payment of your family member's medical bills and funeral expenses.

In addition, if you were with your family member at the time, you may also be able to sue the responsible party under Nevada's negligent infliction of emotional distress law.

We recommend that you not try settling these claims by yourself. Insurers fight back hard against claims of wrongful death at a Nevada concert. Our Las Vegas wrongful death lawyers can help you put together a compelling case in the face of these enormous legal and emotional challenges.

Injured at a concert in Las Vegas? Call us for help…

If you or someone you care about was injured at a Nevada concert, we invite you to contact us for a free consultation.

When someone is hurt or killed at a concert in Las Vegas, the responsible parties will often point the finger at each other, leaving you with unpaid medical bills and damages for pain and suffering.

That's where we come in. Our caring Las Vegas personal injury attorneys will fight proactively and aggressively to make sure you get the compensation you need and deserve.

To schedule your free consultation call us at 702-DEFENSE (702-333-3673) or fill out the form on this page. The clock is ticking on your right to sue so contact us today.