Penal Code 26500 PC is the California law that makes it a misdemeanor to sell, lease or transfer firearms without a valid permit.1 Violation of this California gun law carries a penalty of up to six months in a county jail and a maximum $1,000 fine. This is for every firearm that one sells, leases, or transfers without a permit.2

Below, our California criminal defense attorneys discuss the following: 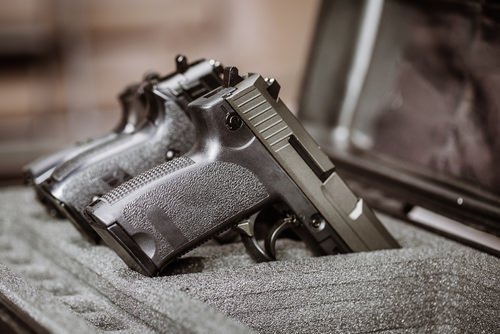 PC 26500 is the California law that makes it a misdemeanor to sell, lease or transfer firearms without a valid permit.

1. The unlicensed sale of firearms in California

California Penal Code 26500(a) PC states that no person shall sell, lease, or transfer firearms without a license to do so.  Even then, the transfer must be for the type of firearm authorized under the permit.3

Under California law, a gun or firearm is:

Examples: Examples of "firearms"…often generically referred to as "guns"…include (but are not limited to):

Also included in the definition of "firearms" are:

Such devices are illegal even if they are designed for emergency or distress signaling purposes.7

However, the following do not count as firearms for purposes of Penal Code 26500:

1.2. Who may legally own or possess a gun in California?

Anyone else may possess a firearm or ammunition16 (other than armor piercing ammunition17). The only requirement is that in order to purchase a handgun, you must possess a valid handgun safety certificate.18

Certain people, transactions, and firearms are exempt from prosecution under PC 26500.  These include (but are not limited to):

Note, however, that even these exceptions have exceptions.  This is why it's critical that anyone charged with a firearm or weapon offense contact a criminal defense attorney.

A good California criminal defense attorney will be familiar with California gun laws and all of their nuances.

1.4. The requirement that ALL gun sales be completed through a licensed dealer

Some states allow individuals to sell firearms out of their homes, in newspaper ads, online, and even at garage sales.  These unlicensed individuals are exempt from conducting background checks of their buyers.  Thus they can sell guns to people otherwise banned from possessing or owning firearms.

California, however, requires that all transactions involving firearms…even those between private parties…must be completed through a licensed dealer.

Even the exceptions listed above…such as lawful "infrequent" transactions between unlicensed individuals…must ultimately be brokered through licensed dealers.28

Unlicensed individuals can arrange for the sale, lease, or transfer of firearms.  But a licensed dealer must be involved to complete the transaction.

In order to obtain a California license to sell firearms…and therefore avoid prosecution under Penal Code 26500 PC…you must obtain and maintain all of the following:

A license to sell firearms doesn't give you the right to sell all firearms.  It means that you are licensed to sell the legal firearms specified on the permit.

Most firearm licenses are for "generic" firearms.  There are separate licensing requirements for dangerous weapons31 such as:

And even if you have a license, you violate the law if you sell illegal firearms.  Illegal firearms include (but are not limited to):

"Generally prohibited weapons" include such items as hidden knives, nunchakus, and metal knuckles.  Also included are unconventional guns and firearm accessories, including short-barreled shotguns and rifles.39

If you violate one of the above laws, prosecutors could prosecute you and revoke your firearms license.

Similarly, if you fail to maintain any licensing requirements, the state will revoke your California license to sell firearms.  And if you sell, lease, or transfer firearms without a license, you face prosecution under Penal Code 26500.

Another way that you can forfeit your license is by failing to conduct a legitimate background check before selling firearms to an individual.  If you don't conduct a check…or you sell, lease, or transfer a firearm to someone who fails that check…the state could revoke your California license to sell firearms.

And if you continue to engage in transactions that involve selling, leasing, or transferring firearms after your license has been revoked, you subject yourself to prosecution.

3. Penalties for the unlicensed sale of a gun under California

The unlicensed sale of a firearm in California is a misdemeanor.40

Such punishment is for each firearm you sell without a valid permit.42

4. Defenses to California's law against the unlicensed sale of firearms

Fortunately, there are a number of legal defenses to charges under California Penal Code 26500.

Often the police aren't as knowledgeable as they believe they are.  You may fall under one of the exceptions to this law…an exception the cops simply didn't recognize.

Or…perhaps you were entrapped into selling a gun to an undercover cop.  If you are an unlicensed dealer and only sold the weapon to the undercover decoy because he/she threatened you or coerced you into doing so, entrapment serves as a valid legal defense.43

Other types of police misconduct could also absolve you of criminal culpability under PC 26500.44

Examples: Examples of police misconduct include (but are not limited to):

California firearms offenses are no different than any other crime.  As Oakland criminal defense attorney Jim Hammer explains:45

"If your attorney has mastered the applicable laws and conducted a thorough investigation of the facts, he or she will know the most effective California legal defenses to present on your behalf."

If you or loved one is charged with Penal Code Section 26500 PC unlicensed sale of firearms and you are looking to hire an attorney for representation, we invite you to contact us at Shouse Law Group. We can provide a free consultation in office or by phone. We have local offices in Los Angeles, the San Fernando Valley, Pasadena, Long Beach, Orange County, Ventura, San Bernardino, Rancho Cucamonga, Riverside, San Diego, Sacramento, Oakland, San Francisco, San Jose and throughout California.

Additionally, our Las Vegas Nevada criminal defense attorneys represent clients accused of violating Nevada's laws against the illegal sale of firearms.  For more information, we invite you to contact our local attorneys at one of our Nevada law offices, located in Reno and Las Vegas.46

Department of Justice Bureau of Firearms.   Provided by the California Attorney General, this website contains information on the manufacture, sales, ownership, safety training, and transfer of firearms.