Whether you're charged with a crime, or simply want information on California's criminal court process, you've come to the right place.

As a criminal defense law firm comprised of former prosecutors and cops, we know the system inside and out.  More importantly, this knowledge enables us to guide you through this process with ease, confidence, and above all, success.

In this article, our California criminal defense attorneys1 explain

1. The Early Stages of the California Criminal Court Process

After you've been arrested for a crime in this state, your first formal court appearance takes place at your arraignment.

Your California arraignment is your first opportunity to enter a plea in your case.2 The three most common pleas at arraignment include

If you enter a guilty or "no contest" plea, you proceed directly to a sentencing hearing (discussed under Section 4. Proceedings Following a Guilty Plea / Guilty Verdict).

If you enter a "not guilty" plea...which is much more common at this stage of the proceedings...the judge will address the issue of bail.

California bail and bail bonds refer to the money that is posted with the court to ensure that you will attend all of your court appearances.  Bail is typically set according to the local county bail schedule.4 However, California bail laws provide you with an opportunity to ask the judge to reduce the scheduled bail. (Learn about Pretrial Assessment Services, pretrial risk assessments, validated risk assessment tools, and preventive detention hearings in California.)

During a California bail hearing, you are permitted to present mitigating factors in support of your request to reduce or eliminate your set bail.  But before the judge will reduce, raise, or eliminate your bail, he/she considers factors such as

O.R. or "own recognizance" release

If the judge agrees to waive your bail, he/she releases you on your own recognizance, more commonly referred to as an O.R. release.  As long as you are not charged with a capital offense...that is, one that is punishable by death...you are entitled to an O.R. or "own recognizance" release or supervised own recognizance release unless that release

Once you have entered a "not guilty" plea...and the question of your bail has been resolved...you enter the pretrial process.

As San Jose criminal defense attorney Jim Hammer7 explains, "California's pretrial process is the phase of the California criminal court process where the majority of cases are resolved."

"Pretrial" refers to all proceedings that take place before a trial.  This includes

The preliminary hearing in felony cases

A California preliminary hearing is one of the first pretrial proceedings that takes place in a felony case.  Commonly referred to as a "prelim" or a probable cause hearing, this proceeding takes place to ensure that you are not being held to answer for a crime for which there is not adequate evidence.8

In order to resolve this issue, the judge must answer two questions:

If the judge answers these questions in the affirmative, he/she "hold you to answer for the charge(s)" and transfers you to the trial court for further pretrial proceedings...proceedings that generally involve motions.

Penal Code 995 PC motion to set aside the information

If...following your preliminary hearing...it appears that the judge incorrectly held you to answer for the charge(s), your California criminal defense lawyer will file a Penal Code 995 "motion to set aside the information" on your behalf.

A Penal Code 995 PC "motion to set aside the information" is essentially a request for the judge to dismiss one or more of the charges against you.9

But "as long as there is some evidence that supports probable cause, a reviewing judge cannot grant a 995 motion simply because it is equally as likely that there was not probable cause."10

However, if the trial court judge believes that the preliminary hearing judge was incorrect in finding a reasonable or probable cause, the trial judge will grant the 995 motion and will set aside the pertinent count(s).

Another popular pretrial motion is what's known as a Pitchess motion.  A California Pitchess motion is a request for information contained in an officer's personnel file about prior complaints of excessive force, bias, or other forms of police misconduct.11

If the judge grants your motion, you may be able to call those complainants as witnesses to taint the officer's credibility.  In reality, if the prosecutor learns that there is damaging information, he/she will usually reduce or even dismiss one or more of the charges against you.

Along these same lines, if it appears that the police violated your Fourth Amendment right to be free from unreasonable searches and seizures, your attorney will file a 1538.5 motion to suppress.

A California Penal Code 1538.5 motion to suppress evidence is just that...a request for the judge to exclude any evidence that was illegally obtained.12 When this takes place, the suppression of the illegal evidence is what's known as the "exclusionary rule".

And...like a Pitchess motion above... if your lawyer prevails on this motion, it often means that the case against you is weakened or even gets dismissed. 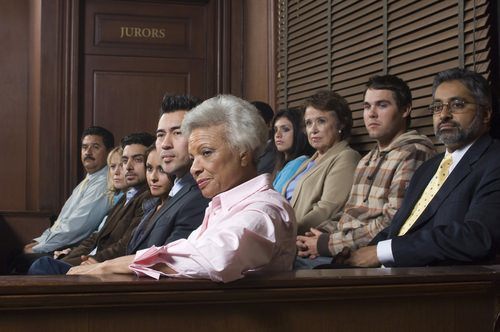 Cases that do not resolve during pretrial proceedings progress into the trial phase of the California criminal court process.

Cases that do not resolve during pretrial proceedings progress into the trial phase of the California criminal court process.

California trials may be of two types:  bench trials or jury trials.

Bench trials (also known as court trials) take place when the judge acts as both the judge and jury.  In a jury trial, by contrast, 12 members of the community are selected to hear the evidence against you--and your defense--and then to decide whether you are guilty or not guilty.

Anyone accused in this state of a misdemeanor or felony is entitled to a jury trial.13 A California jury trial typically proceeds as follows:

If, following your trial, you discover that your verdict was tainted by

you may be entitled to a new trial.15 A California motion for a new trial may be raised on any of these grounds as long as it is filed before the judge pronounces judgment (which is usually done at a California sentencing hearing).

If granted, you begin the new trial with a completely clean slate as if no trial had ever taken place.16

This is just another reason why it is so important to have skilled representation on your side throughout the California criminal court process.  As former cops and prosecutors, we know the most effective arguments to convince judges to impose the least restrictive penalties available.

If you or a loved one is in need of help with the court process and you are looking to hire an attorney for representation, we invite you to contact us at Shouse Law Group. We can provide a free consultation in office or by phone. We have local offices in Los Angeles, the San Fernando Valley, Pasadena, Long Beach, Orange County, Ventura, San Bernardino, Rancho Cucamonga, Riverside, San Diego, Sacramento, Oakland, San Francisco, San Jose and throughout California.