Vehicle Code 27465b CVC is the California statute that makes it a traffic offense for a person to drive a motor vehicle with tires that have worn tire treads.

CVC 27465b states that “no person shall use on a highway a pneumatic tire on a vehicle axle when the tire has less than the following tread depth, except when temporarily installed on a disabled vehicle…”

The code section then mandates, for most vehicles, a tread depth of:

Drivers can challenge a moving violation under this California vehicle code section with a legal defense. Common defenses are for the accused to show that:

Driving a car with bald tires is a crime in California. It is charged as an infraction, which is a less serious offense than a:

The crime is punished with a traffic ticket that comes with a fine of $25.00.

A violation does not result in the DMV placing points against the motorist’s driver’s license. Note that the accumulation of points is unfavorable since it can lead to: 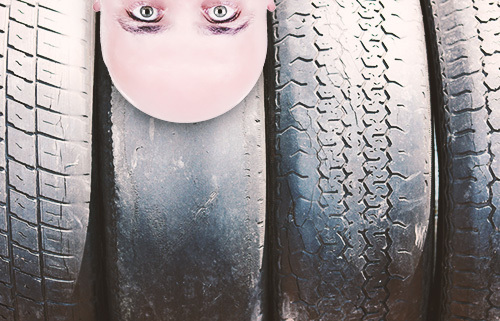 Driving with bald tires is an infraction under Vehicle Code 27465b CVC.

1. What is the minimum tread depth for tires in California?

This code section says that it is a traffic offense for a motorist to operate a vehicle with bald tires.

The law requires most treads to be at least:

The “tread” of a tire is that portion of the tire, consisting of the ribs and grooves, which comes in contact with the roadway.2

Note that automobile repair shops do not commit an offense under this statute if they:

Note too that this law is just one of many California laws that regulates specific parts of a vehicle. Other laws may apply to a vehicle’s:

Vehicle Code 27465 specifically states that it does not apply to persons that have installed on their vehicles:

It is a defense, therefore, for an accused to say that while he/she may have been driving with a worn tire, that tire was a spare.

This statute involves precise measurements as to tire treads. These measurements even deal with tiny fractions of an inch. A defense, then, is for an accused to say that:

CVC 27465d states that the law does not apply to “implements of husbandry.” An “implement of husbandry” is a vehicle that is used exclusively in the conduct of agricultural operations. This means a person will not be in violation of the law if he/she operates an agricultural vehicle with bald tires. 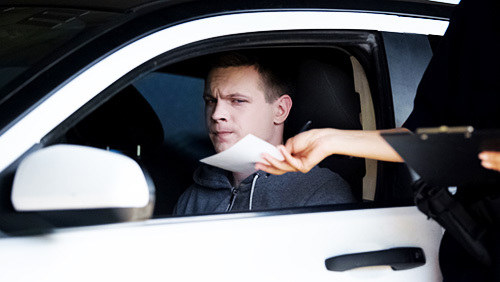 Driving a car with worn-out tire treads can result in a fine.

3. What are the potential fines?

A violation of this statute is charged as an infraction.

A driver will be issued a ticket and must pay an underlying fine of $25.00. Note that this is the base fine. The actual fine will cost much more as it includes:

A bald tire violation does not result in a point on the offender’s DMV driving record.

4. What happens if I ignore the citation?

It is a further California crime if a driver ignores a traffic ticket. “Ignore” here means failing to appear in court when required to address it.

A driver has to sign a written promise to appear in court if he/she is issued a traffic ticket in California.

A party commits an offense, “failure to appear” per Vehicle Code 40508 CVC, if he/she willfully breaks this promise and fails to show in court.5

A violation of this law is charged as a misdemeanor. The crime is punishable by:

Note that the law applies to any traffic ticket, including tickets involving:

5. Can this be used as evidence in a personal injury claim?

In this event, if the motorist suffers injuries, he/she can file a personal injury lawsuit against the driver.

In this suit, the driver with worn tire treads may be found “negligent.”

A negligent party must compensate the plaintiff for any injuries that he/she suffered.

6. Are there laws related to this statute?

There are three laws related to driving a vehicle with bald tires. These are:

Vehicle Code 35400 CVC is the California statute that states a motor vehicle cannot exceed an overall length of 40 feet.

Exceptions to this law do apply with regards to:

Like with a worn tire tread violation, a ticket under this statute will not result in a DMV point.

Vehicle Code 21710 CVC makes it a traffic offense for a driver to coast in neutral while going downhill.

As with Vehicle Code 27465b, a violation of this statute is charged as an infraction.

Vehicle Code 38300 CVC is the California statute that makes it an offense for a driver to disobey any:

Some examples of “signs, signals, and devices” are:

A traffic ticket for violating this law costs about $238, which is more than a bald tire ticket.