Vehicle Code 20002 VC is the California law that defines misdemeanor hit and run. This section makes it a crime to flee the scene of an accident, without stopping and providing your information, when the accident caused damage to other vehicles or property.

20002 VC states that “the driver of any vehicle involved in an accident resulting only in damage to any property, including vehicles, shall immediately stop the vehicle at the nearest location that will not impede traffic or otherwise jeopardize the safety of other motorists.”

Misdemeanor hit and run is punishable by up to 6 months in jail, fines of up to $1000.00, restitution to the victims for any property damage, and 2 points on the person’s California driving record.

California law requires a driver involved in an accident (that causes property damage or injuries) to stop at the nearest safe location and:

Examples of hit and run:

There are several legal defenses that a person can raise if accused of a crime under Vehicle Code 20002. These include showing that:

A violation of VC 20002 is charged as a misdemeanor in California (as opposed to a felony or an infraction).

In lieu of jail time, a judge may award a defendant with misdemeanor (or summary probation). 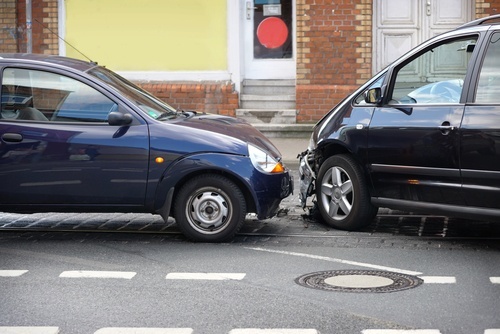 Hit and run is a misdemeanor in California unless it results in an injury or death.

1. When is hit and run a misdemeanor in California?

Vehicle Code 20002 VC is the California statute that makes it a crime for a person to fail to stop his/her vehicle, after being involved in an accident, when the accident resulted in some type of property damage.1

A prosecutor must prove four things in order to successfully convict a person of misdemeanor hit and run. These are:

Someone commits an act “willfully” when he/she does it willingly or on purpose. It is not required that he/she intend to break the law, hurt someone else, or gain any advantage.3

In providing identifying information, an accused must have provided enough information so that the owner of the damaged property understood the accused was driving the vehicle.4

Note that a driver’s duty to stop at the accident scene applies no matter what party or driver caused the accident.5

Also note that this duty applies even if an accident occurred on private property (e.g., as in the case of a motorist driving through a homeowner’s fence). If the owner of the vehicle or damaged property is not there, the driver should leave a written note.6

Property damage under this statute does include any damage to a dog or other pet.7

Finally, California courts recently stated that civil compromises can no longer be used in misdemeanor California hit and run cases.8

It may be possible to get VC 20002 charges reduced or dismissed.

Should the case go to trial, the D.A. must prove guilt beyond a reasonable doubt.

2.1. There was no property damage

Example: Ed is parking when he dings the car behind him. Ed sees a scratch on his fender. But the other car shows no signs of damage. Ed also takes a photo of the car to show there is no damage. Ed then drives away without leaving a note.

A pedestrian who saw the collision writes down Ed’s license plate number. Then the pedestrian calls the police to report a hit and run. But when Ed explains that only his car was damaged, any charges should be dropped.

Prosecutors do not care if an at-fault driver’s property was damaged. All that matters is any other property damage the collision caused. So that Ed’s car in the above example got dinged does not hurt his case.

2.2. The defendant did not realize there was a collision

It is not uncommon for minor car accidents to occur without one or both drivers realizing it. And if a driver has the radio on high, the driver may genuinely be oblivious to minor scrapes.

Example: Lara is driving on a windy day. Debris is constantly hitting her windshield and hood. During a sneeze she swerves, making contact with the car to her right and causing a slight dent. Lara feels something but assumes it is just more debris. Lara keeps driving. The other driver gets her license plate number. And Lara gets arrested for violating VC 20002.

Lara’s attorney explains to prosecutors that she would never intentionally flee the scene of an accident. And the attorney produces a weather report from that day showing particularly high winds. If the prosecutor realizes Lara had no criminal intent, the charges could be dropped. Then Lara would only be civilly liable to pay for the other driver’s repairs.

This “ignorance” defense is more effective when the defendant is driving an older or lower-cost car. More modern, high-end cars have sensors that beep loudly when other cars get too close.

2.3. The defendant was misidentified

The nature of hit-and-runs is that the culprit drives away too fast for anyone at the scene to get a good look at him or her. This can lead to innocent people being misidentified as the suspect.

Example: Jeffrey and his friend Cal both have black, curly hair. One day Jeffrey borrows Cal’s sedan. Jeffrey accidentally grazes a pedestrian with the side mirror, panics, and drives away. The pedestrian – who is not injured – manages to take a photo of the sedan, which shows the back of Jeffrey’s head and the license plate numbers. Police trace it to Cal and arrest him for hit and run. The pedestrian picks Cal out of a line up because of the black, curly hair. Fortunately, Cal’s attorney finds traffic camera footage near the time of the crash, showing that the person in the sedan was Jeffrey and not Cal.

Prosecutors often have insufficient evidence to positively identify who the at-fault driver was. In addition to relying on surveillance video, defense attorneys try to find eyewitnesses and any recorded communications showing that the defendant had an alibi at the time of the crash.

Misdemeanor hit and run in California is punished by up to 6 months in jail.

A violation of this statute is charged as a misdemeanor in California.9

4. What if damage only occurred to my car?

It is not a California crime to leave the scene of an accident that caused no injuries or damage to the other car. But to be safe, the driver should take photos of the other car to show no damage occurred.

If the driver is unsure whether property damage occurred, then the driver should stop and exchange information with the other driver. Or if the other car was parked and unattended, the driver should leave a conspicuous note. Examples of car accident damage that may not be visible include:

And anyone the driver hit might seem fine but could have sustained soft-tissue damage – this may take time to manifest.

Either way, most insurance companies require their policy-holders to notify them of all accidents even if they are minor. Otherwise, the insurer may deny any claim that may later arise out of the accident.

5. What are related crimes?

Vehicle Code 20001 VC is the California law that defines the crime of felony hit and run.

This section makes it a felony for a driver to flee the scene of an accident when another person killed or had a serious injury. Drivers are supposed to stop and give reasonable assistance to the injured persons.11

A violation of VC 20001 is a wobbler offense. This means that it can be charged as either a misdemeanor or a felony.12

If charged as a misdemeanor, the crime is punishable by imprisonment in the county jail for up to one year.13

If charged as a felony, the offense is punishable by up to three years in state prison.14

Vehicle Code 23152(a) VC is the California DUI law that makes it a crime for a person to operate a motor vehicle while “under the influence” of alcohol.15

“Under the influence” means that a driver’s physical or mental abilities are impaired to the extent that he/she can no longer drive as well as a cautious sober person.16

A first, second and third offense under VC 23152a are charged as misdemeanors in California. Penalties for a DUI conviction may include:

Vehicle Code 12500 VC makes it unlawful for a person to drive in California without a valid driver’s license.17

Note that the driver’s license does not have to be from California. It can be from any jurisdiction as long as:

Driving without a valid license is a California “wobblette” offense. This means it can be charged as either a California misdemeanor or a non-criminal infraction.18

As an infraction, driving without a license carries a potential fine of up to $250.19

But if charged as a misdemeanor, VC 12500a can be punished by:

Contact our law firm for legal advice. We create attorney-client relationships throughout the state.

If you or someone you know has been accused of a crime under Vehicle Code 20002 VC, we invite you to contact us for a free consultation. Our criminal defense lawyers can be reached 24/7. We are based in Los Angeles County but have law offices throughout the state of California, such as Pasadena, Orange County, Riverside, Long Beach, San Bernardino, San Diego, and more.

You may also wish to review our article on How long after a hit and run can I be charged?

And, for accusations in Nevada, please see our article on: “Hit and Run Laws in Nevada (NRS 484E.010), Explained by Las Vegas DUI Defense Attorneys.”