Luckily, there are several legal defenses that a person can raise if accused of a crime under this section. These include showing that an accused party:

As a misdemeanor, the crime of malicious mischief to a vehicle is punishable by: 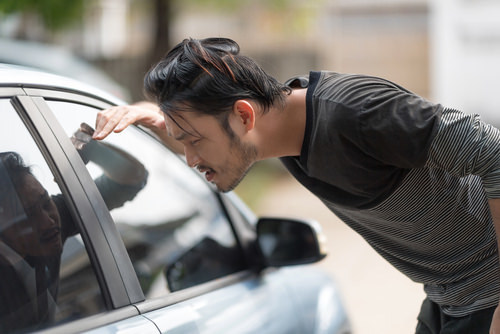 Vehicle Code 10853 VC makes it a crime to commit malicious mischief to a vehicle.

1. What does it mean to commit malicious mischief to a vehicle?

Second, a person can also commit malicious mischief to a vehicle if:

California law states that “malicious mischief” is when a person defaces, damages, or destroys the property of another without consent.3

Vehicle Code 10853 applies to vehicles and also items attached to vehicles, including license plates, hood ornaments, and mirrors.4 So, for example, a person is guilty of malicious mischief if he attempts to damage or defaces a car’s license plate.

A person accused under 10853 VC can challenge the accusation by raising a legal defense. A good defense can often get a charge reduced or even dismissed. Please note, though, that it is critical for an accused to hire an attorney to get the most effective defense.

Recall that the main element within a VC 10853 charge is that a person must act with the specific intent to commit malicious mischief. This means he must specifically intend to deface, damage, or destroy another person’s vehicle, or a device or mechanism inside it.

If a person damages, or in someway defaces a car, but did so without this specific intent, he would have a valid legal defense to any charges. This defense is often raised by a defendant that accidentally damages another person’s vehicle.

Malicious mischief is committed when a person defaces, damages, or destroys the property of another without consent. A valid legal defense, therefore, is to show that a defendant had the car owner’s consent to damage or disrupt the vehicle.

It is hard to imagine that a car owner would allow a person to injure his vehicle. But, the situation sometimes occurs when a person owns a car in poor or horrible condition.

Parties that commit malicious mischief to a vehicle often do so at night. They also commit the crime quickly. Therefore, it is usually very difficult for eyewitnesses (if any) to recognize who committed the crime. This can lead to false arrests and misidentifications of offenders. If a prosecutor cannot prove beyond a reasonable doubt that the defendant is the person who caused malicious mischief, then the crime should be dismissed.

3. What is the potential sentencing?

Under Vehicle Code 10853 VC, malicious mischief is a misdemeanor offense.5

There are three crimes related to malicious mischief to a vehicle. These are:

Penal Code 594 PC is California’s vandalism and graffiti law. The law prohibits maliciously doing any of the following things to someone else’s property:

The penalties for California vandalism charges generally depend on the dollar value of the property damage that was done.

If the damage is worth $400 or more, vandalism is a wobbler offense, meaning it can be charged as either a California misdemeanor or a felony. If charged as a felony, the penalties for vandalism may include:

If the damage in a vandalism case is worth less than $400, the crime is charged as a misdemeanor. As such, it is punishable by:

In California, the crime of auto burglary, per Penal Code 459, takes place when someone enters a locked automobile or its trunk, with the intent to either:

California auto burglary is a form of so-called “second-degree” burglary.11

Second-degree burglary (including auto burglary, per PC 459) is a wobbler, meaning it can get charged as either a misdemeanor or a felony.

If charged as a misdemeanor, the maximum penalty is imprisonment in the county jail for up to one year.12

If charged as a felony, the maximum jail sentence is three years.13

California Vehicle Code 10851 VC makes it a crime for a person to drive or take a vehicle without the owner’s consent. This crime is sometimes referred to as “joyriding.”

A prosecutor must prove three elements to show that a person is guilty under Vehicle Code 10851. These include proving that:

Under VC 10851, the determination as to whether a defendant had “the intent to deny” is based upon the specific facts of a case.

Under Vehicle Code 10851 VC, the crime of unlawfully taking or driving a car is a wobbler offense. This means it can be punished as either a California misdemeanor or a felony.

These penalties increase if an offender:

If you or someone you know has been accused of a crime per Vehicle Code 10853, we invite you to contact us for a free consultation. We can be reached 24/7 by phone or on social media.

(For similar accusations or charges in Nevada, please see our page on Nevada “Vandalism & Malicious Destruction of Property” Laws.)