Arrested for Arson? Advice from a former D.A.

California Penal Code 451 PC states that “a person is guilty of arson when he or she willfully and maliciously sets fire to or burns or causes to be burned or who aids, counsels, or procures the burning of, any structure, forest land, or property.” A conviction is a felony punishable by a sentence of up to 9 years in jail or state prison.

Police will sometimes write this citation as 451 PC or 451 CPC as abbreviations for the California Penal Code.

Note that this code section is one of two California arson laws. The other is Penal Code 452 PC, “reckless burning.”

A defendant can use a legal defense to challenge an arson charge. A few common defenses are:

Penalties for Arson in California

A violation of this code section is charged as a felony. This is opposed to a misdemeanor or an infraction.

The maximum punishment for the offense is a state prison term for up to nine years. 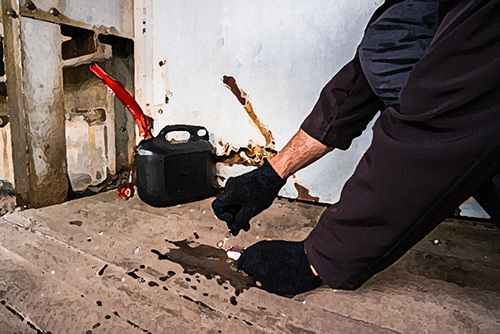 Penal Code 451 PC is the California statute that defines the crime of arson.

1. How does California law define the crime of arson?

Penal Code 451 PC is the California statute that makes it a crime for a person to set fire to any:

A prosecutor must prove the following to convict a person under this law:

To set ﬁre to or burn means to damage or destroy with ﬁre either all or part of something, no matter how small the part.3

The simple charring of wood is sufficient evidence of a “fire or burn.”4

For purposes of this law, someone commits an act willfully when he or she does it willingly or on purpose.5

Example: Becky is not guilty of arson if, while reaching for a glass of water, her elbow knocks down a candle and it starts a fire in her condo building. Here, the fire began because of an accident and not a willful act. Further, Becky had no intent to defraud, annoy, or injure someone.

Note that an accused can still be convicted of arson, per Penal Code 452, even if he does not act willfully and maliciously. This code section applies to “reckless” burning. It says it is a crime for a person to recklessly set fire to or burn any structure, forest land, or property.

“Recklessly” is a lower standard than willfully and maliciously. A person acts “recklessly” if:

California law states that a structure is any:

Arson fire damage to ﬁxtures within a building may fall into the category of a “structure” if the ﬁxtures are an integral part of the building.9

Note that arson of property does not include a person burning his own personal property. This is unless:

Example: Nia is not guilty of arson if she does a controlled burn of an old shed on her property in order to remove it.

However, she may be guilty of the offense if someone gets hurt in the burn or she performed the burn to defraud her insurance company. 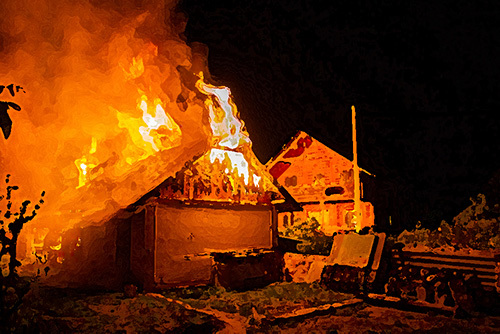 One defense is that the house was that the fire was not started willfully.

A defendant can raise a legal defense to try and beat an arson charge.

Three common defenses to a count of arson are:

(Another potential defense is that law enforcement committed misconduct, such as coercing a confession.)

Recall that an accused can only be guilty under this statute if he acted willfully. This means it is a valid defense for the defendant to show that he did not start a fire on purpose (for example, maybe he or she burnt something on accident).

2.2. Fire not started by arson

It is always a defense in arson cases for a defendant to show that a fire was started by something else other than arson. Some common causes of fires include:

An accused can try to show his innocence by showing that one of the above caused a fire, and not his own acts.

As to arson of property, recall that a person cannot be guilty of burning his own personal property unless:

One defense, therefore, to arson of personal property is for the arson suspect to show that there was no intent to defraud. A person intends to commit fraud when he tries to deceive or trick another person.

Example: Jerome is not guilty of arson if an arson investigation shows that his own home partially burnt down because of a spark from his fireplace. This is an accident as opposed an intent to defraud.

The district attorney can charge him with arson, though, if he intentionally set fire to his home for insurance reasons. Here, there is an intent to defraud the insurer.

A violation of PC 451 is charged as a felony in California.14

The specific punishment for felony arson depends on:

The potential state prison sentences for willful/malicious counts of arson are:

Incarceration is served in state prison, not a county jail. Alleged arsonists are never prosecuted under PC 451 for just a misdemeanor or wobbler offense.

An arson conviction will have negative immigration consequences.

A category of “deportable” or “inadmissible” crimes includes “crimes of moral turpitude.”16

California law states that arson is in fact a crime of moral turpitude.17 This means an arson conviction can lead to an immigrant being deported or labeled as inadmissible.

If a party violates a probation term, he could still possibly get the offense expunged. This, though, would be in the judge’s discretion.

Under Penal Code 1203.4, an expungement releases an individual from virtually “all penalties and disabilities” arising out of the conviction.18

A conviction under 451 PC will have a negative effect on the convicted party’s gun rights.

Since arson is charged as a felony, a conviction of this crime will result in the defendant losing his rights to own and possess a gun.

There are three crimes related to arson.19 These are:

Per Penal Code 187 PC, first-degree murder may be charged when a killing:

Note that like arson, a conviction of first-degree murder may require a showing of willfulness on the part of the accused.

Penal Code 459 PC says that a burglary occurs when a person:

Note that burglary applies to a narrower subject area than arson. PC 459 only applies to residential or commercial buildings (and does not include “structures” and “forest land”).

Penal Code 602 PC is California’s law that makes it a crime to trespass.

A person commits trespassing when he or she enters, or remains on, someone else’s property without permission or a right to do so.

Unlike arson, there is no requirement under this law that the defendant act with any specific willfulness or maliciousness.

Call our law firm for help with your case.

For additional guidance or to discuss your case with a criminal defense attorney, we invite you to contact our criminal defense lawyers at Shouse Law Group by phone, contact form, or social media. We have law offices throughout the state of California, including Los Angeles, Riverside, San Bernardino, and more.

For similar accusations in Colorado, please see our article on “Colorado’s Arson Laws.”