What is Lewd and Lascivious Conduct? 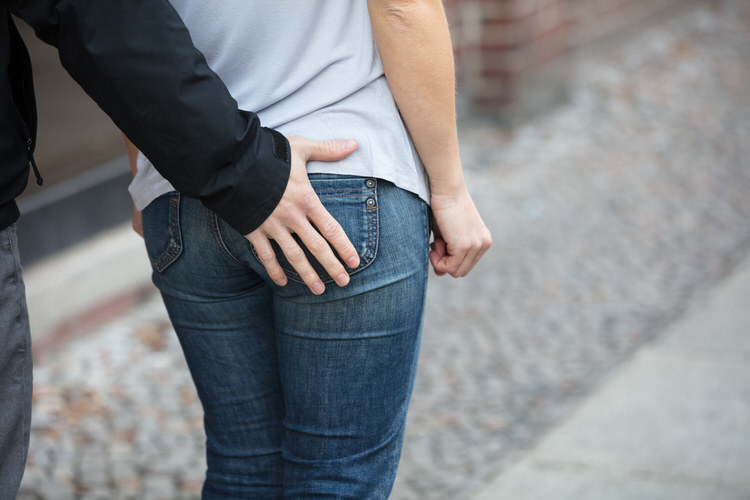 Groping can be considered lewd and lascivious conduct...

Lewd and lascivious conduct is defined as a sexual act that is offensive to community standards of decency. It often involves a child. Physical penetration is not necessary. It is a type of sex crime. It is often charged as a felony offense.

One example of lewd and lascivious conduct is intentionally groping a minor.

The penalties for a conviction can be severe. They often depend on the age of the victim. They can also increase if force was used. A conviction requires registering as a sex offender.

What do the words “lewd” or “lascivious” mean?

Lewd and lascivious both mean an offensive sexual desire.

The word “lewd” means something that is sexually unchaste or lustful. It is synonymous with words like:

The word “lascivious” means something that is sexually arousing or lustful. It is pronounced “luh-SIV-ee-us.” It is also similar to words like:

What kind of conduct is lewd and lascivious?

Conduct that is lewd or lascivious is an action that furthers an offensive sexual desire.

Because it is an offensive sexual desire, conduct that is lewd or lascivious often involves children. This is considered offensive because children are too young to consent or understand. Lewd conduct can also produce psychological trauma in children.

To be lewd and lascivious, the conduct has to be intentional or willful. It cannot be accidental.

The conduct also has to be for the purpose or arousing sexual desire. Whether it is actually arousing does not matter.

Example: Caesar coaxes a 5-year-old girl to walk with him by giving her a lollipop. Once they are alone, he rubs her vagina.1

Does there need to be penetration?

Penetration is not required for conduct to be lewd and lascivious.

Physical penetration tends to turn lewd conduct into a more severe type of crime, like:

Sexual acts with children that involve penetration are treated even more severely. In California, they are often charged as:

Yes, each state has its own definition of lewd and lascivious conduct. Most states handle the offense in similar ways. However, there might be some differences in the details.

For example, in California, conduct can only be lewd and lascivious if:

In Nevada, the age difference does not matter. It is always a crime if the alleged victim was under 16.3

Some states, like Oregon, do not have a separate statute for lewd conduct. Instead, lewd and lascivious behavior falls under other criminal statutes, like sexual assault.

In Florida, lewd and lascivious conduct includes a host of sexual offenses that involve someone under 16. They include:

Example: 20-year-old Mark tells his 15-year-old friend to rub the crotch of his pants. In Nevada, it would be lewd conduct. In California, it would not. It may still be a different crime, though.

What are the penalties for a conviction?

The penalties for a conviction of lewd and lascivious conduct are severe. They are usually felonies. The precise penalties depend on:

However, if the victim was under 14 and the defendant inflicted a serious injury, it can lead to life in prison.5

In Nevada, the penalties are harsher. If the alleged victim was under 14, a conviction carries:

In Florida, the penalties largely depend on the precise allegations. Anyone 18 or over can face like in jail for molesting someone under 12.6 For intentionally exposing themselves to a minor, they can face up to:

Defendants convicted of lewd conduct generally have to register as a sex offender.

In California, this is required under “Megan's Law.” First-time offenders will be required to register for 20 years. Subsequent offenses will require lifetime registration.7

Are there any defenses?

There are several defenses to an allegation of lewd and lascivious conduct. They include:

For conduct to be lewd and lascivious, it has to be intentional. If the charge involves physical contact, it cannot be accidental.

Example: Mike stumbles on the stairs. He reaches for the handrail but grabs Michelle's buttocks.

Without sexual desire, conduct cannot be lewd or lascivious.

Example: Maurice holds his 6-month-old daughter with his hand on her buttocks.

People accused of lewd conduct can argue that it was someone else. Children tend to confuse one person for another. When they do, they can point the finger at the wrong person.

Example: 5-year-old Chloe says that the mailman groped her, even though it was actually her uncle. Both of the men have the same style mustache.

Children can be coerced into making a false accusation. This can be done to get revenge or leverage over a defendant.

Example: Maryanne tells her 7-year-old daughter to say her husband touched her inappropriately during a contentious divorce.

Some common defenses are not allowed to defend allegations of lewd conduct.

Consent is not a defense if the alleged victim is was a minor. Minors are under the legal age of consent. Even if they gave consent, the law would disregard it.

Defendants can also be prevented from presenting evidence that the alleged victim was promiscuous. Such evidence would undermine the allegations. It would show that the accuser had wanted a sexual interaction. It would insinuate consent. In many states, though, this evidence is deemed irrelevant.

Why does the law use two words that mean the same thing?

“Lewd and lascivious” is an example of a redundant synonym.

These phrases came to the U.S. from England. They have been used by English courts since at least the 1400s. Back then, lawyers spoke English, French, and Latin. Redundant synonyms helped them understand each other. One word was French or Latin – in this case, “lewd.” The other one was English – in this case, “lascivious.”