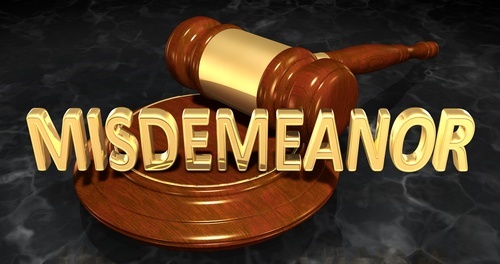 Infractions and misdemeanors are both offenses in the California criminal justice system. The main difference between the two is in their severity and in how they get punished.

Infractions are less serious offenses than misdemeanors. They are punishable by a maximum fine of $250. Unlike misdemeanors, they do not subject an offender to incarceration.

Common examples of California infractions are:

Misdemeanors in California include both standard misdemeanors and gross misdemeanors. They are more serios offenses than infractions. Further, they can result in a jail sentence. The maximum sentence is 364 days in the county jail.

Common examples of California misdemeanors are:

Infractions, under California law, largely include traffic/moving violations. They are punishable by a maximum $250 fine.

Please note, however, that this amount is the base fine. The actual fine is most often significantly greater because it includes fees and penalty assessments.

In addition to fines, a person guilty of an infraction might receive points on his DMV driving record. There are two main problems with points. These are:

Points may get avoided if the guilty party qualifies for, and attends, traffic school.

Some California infractions are classified as “wobbler” offenses. A wobbler is an offense that a prosecutor can charge as either an infraction or a misdemeanor, depending on:

Some examples of infraction wobblers are:

Standard misdemeanors are offenses typically punishable by imprisonment and/or a fine. The maximum jail sentence is six months in the county jail. The maximum fine is $1,000.

Examples of standard misdemeanors are:

Examples of gross misdemeanors are:

Like infractions, some misdemeanors are wobbler offenses. This means a prosecutor can charge them as either a misdemeanor or a felony. Again, the decision will be made depending on:

Some common misdemeanor/felony wobblers are:

In comparison to infractions, misdemeanors can grow more complex and may involve several legal stages. These could include: arrest, arraignment, bail hearing, trial, and appeal.