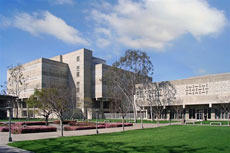 The Orange County Central Jail Complex (CJX)...operated by the California Orange County Sheriff's Department...is comprised of four separate bureaus that are inter-connected by a series of tunnels and corridors.  These include

The Central Women's Jail was actually closed in 2010.  It may reopen later this year or next, but there is no specific timeframe for doing so.  Currently, female inmates are housed at the James A. Musick Jail.

The Intake Release Center is where inmates are booked before they are placed within one of the above bureaus or are transferred to a different Orange County correctional facility such as the Theo Lacy Jail or the James A. Musick Jail.

Finally, the Transportation Bureau is responsible for transporting inmates to court, work sites, other correctional facilities and hospitals when necessary.

The Orange County Central Jail Complex is located at

In this article, our Santa Ana criminal defense attorneys1 provide information about the Orange County Central Jail Complex by addressing the following:

1. Procedures on How to Post Bail for an Inmate at the Orange County Central Jail Complex

Bail for the CJX is set according to the Orange County Bail Schedule and is determined based on the crime(s) for which the inmate was arrested.

"Bail" refers to the money that the inmate (or someone on the inmate's behalf) pays to assure the arresting agency and court that the inmate will make his/her court appearances after being released from jail.

If you wish to bail someone out of the Orange County Central Jail Complex, you may do so 24 hours a day / 7 days a week directly at the facility's Intake Release Center.  Because of the size of this complex, this process can take an average of six (6) to eight (8) hours.

The Intake Release Center accepts the following forms of bail:

∗NOTE:  After you post bail, you should immediately consult with one of our local Orange County criminal defense attorneys.  Not only can we help create the most effective defense to help clear your loved one of his/her charges, but we can schedule a bail hearing to potentially reduce or even waive the inmate's bail.

And a word of caution - the Orange County Jail does not permit you to combine checks, money orders and cash to make a bail payment.  You must post bail using only one type of payment.

If you wish to obtain information about an inmate at the Orange County Central Jail Complex, you can

Before you will be given information, you must know the inmate's full name and his/her date of birth.

you may visit the Orange County case information website.

3. How to Contact an Inmate at the Central Jail Complex

If you wish to buy a calling card for an inmate, you may send the inmate money in accordance with the policies set forth under Section 6. How to Put Money "On the Books" At the Orange County Central Jail so that he/she can purchase one at the Jail's commissary,

If you have a loved one in this Jail, you may want to contact your local telephone company to ensure that collect and calling card calls are not blocked on your telephone plan.

Inmates are not allowed to receive incoming calls.  You may, however, opt to visit an inmate in person or engage in mail correspondence.  Both of these options are discussed in the two sections that follow.

The Inmate Release Center and Central Men's Jail hold visiting hours Friday through Sunday from 8:00am to 5:00pm.  All visits are actually conducted in the IRC.

Specific visiting hours vary, depending on

To find out the exact visiting hours, you can call the Jail directly at (714) 647-4666 or access them online on the CJX visiting hours website.

Inmates are allowed one 30-minute visit per day from a maximum of two adults and one child under 5.  Visits take place on a first-come, first-served basis, so the Jail urges visitors to coordinate visits with other loved ones to avoid a situation where multiple visitors arrive to visit the same inmate at different times.  Should this happen, the second visitor will be turned away.

Attorneys and members of the clergy are not bound by these hours and have unrestricted access to inmates.

The only items visitors are allowed to bring into the visiting area are identification and keys (with the exception of certain necessities for those bringing babies into the facility).  Valid identification consists of a government issued photo I.D. card, such as

In addition, visitors must not bring any

5. Rules and Regulations Regarding
Mail Correspondence

Inmates at the Orange County Central Jail Complex are allowed to send and receive an unlimited number of letters each day.  However...for security reasons...all incoming and outgoing mail is subject to search prior to being delivered or posted.

If you wish to send mail to an inmate at CJX, address it to

Be sure to include a return address because, if you do not, your mail will not be delivered.  Similarly, envelopes with any unnecessary writings, markings or drawings will be rejected.

All mail must comply with the facility's rules and regulations below.

6. How to Put Money "On the Books" At the Orange County Central Jail

Putting money "on the books" is a procedure that conveniently offers family members or friends of inmates at the CJX the opportunity to deposit money into an inmate's in-house bank account.  Any cash that the inmate had at the time of booking will also be deposited into this account unless the money was confiscated by the arresting agency as evidence of a crime.

This account allows inmates to purchase items that are available at the commissary, such as food, drinks, games, and cosmetics while they are incarcerated at this facility.

If you wish to "put money on the books", you may do so with cash, a government check or a money order.  No other forms of payment will be accepted.  Each inmate is allowed to have a maximum of $500 in his/her account at any one time.

If you choose to deposit money in person, you may do so at either

depending on which location is more convenient for you. Theo Lacy is located at

∗In-person deposits must be made with cash or a money order payable in U.S. dollars to the Orange County Sheriff's Department.  Money orders must include the inmate's name and booking number on the reference line.

You can alternatively choose to mail an inmate money.  If you choose to deposit money via the mail, you may send a money order that adheres to the specifications above, or you may mail a government check.   And be sure to comply with the additional rules and regulations that pertain to mail described above under Section 5. Rules and Regulations Regarding Mail Correspondence.

Regardless of whether you choose to make an in-person or mail deposit, funds are available for the inmate's use immediately after they are placed in the inmate's account.

The Orange County Jail Complex offers its inmates a variety of services.  Some of these include:

8. Procedures Regarding the Return of Property at Orange County Central

When inmates are taken to the Orange County Central Jail Complex, any property they have at the time of arrest is collected and stored.  This property is typically stored until the inmate is released.  However, an inmate may designate a friend/family member to collect it on his/her behalf.

If you know that an inmate would like you to pick up his/her property, you can fill out a property release form at a regular visit.  A staff member will have the inmate sign the form, and then you will be able to retrieve his/her property.  This arrangement does not have to be made ahead of time.

Clothing will not be released unless you provide an exchange.