Insurance Fraud in Colorado – Can I go to jail? [2022 UPDATES IN DESCRIPTION]

CRS 18-5-211 is the Colorado law prohibiting insurance fraud. This is defined as deliberately making false claims or giving false information. The crime can be prosecuted as a misdemeanor or a felony and carries penalties of up to 3 years in prison and fines of up to $100,000.00.

Example: Harold submits a life insurance application with Farmers. Harold lies about being a non-smoker to get a lower insurance premium. Farmers does grant him a policy with a lower, non-smoking premium. Therefore, Harold could be prosecuted for defrauding an insurer.

“[w]ith an intent to defraud causes or participates … in a vehicular collision … for the purpose of presenting any false or fraudulent insurance claim[.]”

It is a class 2 misdemeanor to apply for coverage by lying. If the defendant receives a policy, the sentence is:

All other types of insurance-related fraud are class 5 felonies. This carries:

An effective defense to CRS 18-5-211 charges is the defendant had no intent to defraud. Defendants may have to return any money they wrongly received. But defendants who unknowingly provided false information broke no law.

In this article, our Denver Colorado criminal defense attorneys will address: 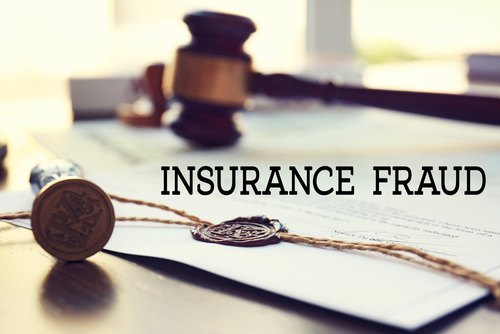 An insurance crime can be a felony or a misdemeanor under CRS 18-5-211.

Insurance fraud is trying to get undeserved benefits from an insurer, such as financial profit. This becomes a Colorado crime when the defendant has the intent to defraud. Mistakenly filing a false claim is no crime.

Receiving an insurance policy after submitting a fraudulent application is a class 2 misdemeanor. Penalties include:

All other ways of defrauding an insurer are a class 5 felony. (Examples include filing a false claim or staging an accident.) The penalties include:

Colorado insurance fraud cases are typically prosecuted by the state’s Attorney General’s office – Insurance Fraud Unit (“Unit”). Though some county district attorneys do have robust economic crime units, such as those in

The Unit collaborates with other agencies such as the

They investigate reports of both “hard fraud” – which is planning false claims such as staging an accident or falsely reporting a vehicle stolen – as well as “soft fraud” – which is inflating the losses of an otherwise legitimate claim, like double-billing or over-billing.

A common way defense lawyers fight fraud charges is to argue the defendant had no intent to defraud.3 Mistakes and oversights are not criminal:

Example: Kelsey is applying for homeowners coverage from Progressive. On the application, he makes a typo and states that his house is worth $800,000. In fact it is worth only $300,000. But Progressive provides him with the policy worth $800,000. Here, Kelsey committed no crime because he had no intent to defraud. Unless the D.A. can prove intent to defraud beyond a reasonable doubt, criminal charges should not stand.

Sometimes, companies suspect policyholders staged an accident to get money. In these alleged fraud cases, the defense attorney would search for all available evidence to show the claimant’s innocence:

Example: Sheila is the victim of a hit-and-run. She calls her auto coverage company Liberty Mutual to make a claim. But her agent believes she is lying because her facts keep changing. After a fraud investigator and various law enforcement agencies look into the matter, Sheila gets charged with defrauding an insurer for staging an accident.

If the defendant in a CRS 18-5-211 case is an agent, three potential defenses are: No intent to defraud is a defense to allegations of trying to defraud an insurer.

Yes, insurance fraud convictions may be sealed from the defendant’s criminal record. The waiting period is

Colorado insurance fraud is arguably a crime involving moral turpitude. And in some cases, it may be an aggravated felony. Therefore, non-citizens convicted of it might be deported.9

Aliens facing fraud charges should consult with an attorney immediately. The lawyer can determine whether the charges are deportable. And the prosecutor may be willing to reduce or dismiss the charges.

7. How do I report insurance fraud in Colorado?

Health insurance fraud may be a misdemeanor or felony.

Identity theft (CRS 18-5-902) is common in the digital age. It is using another person’s identifying information to obtain anything of value. This includes using another’s identity to file an insurance claim. ID theft can be a misdemeanor or felony.

Victims of identity theft should contact the Colorado Department of Labor and Employment.

Forgery is making or possessing fake documents. A classic example is drawing up a fake will. Another is falsifying a tax return. Forgery can be a misdemeanor or felony.

Unemployment insurance fraud is knowingly making a false statement or withholding information in order to receive benefits they are not entitled to. False unemployment claims have been prevalent during the pandemic. Unemployment fraud is a type of criminal theft, and penalties depend on the extent of the unemployment benefits the defendant received.

Workers’ comp fraud is making false statements on a workers’ compensation claim for the purpose of obtaining benefits that the person is not lawfully entitled to. It is always a felony, and the defendant forfeits all rights to compensation.

Arrested? Contact our Denver criminal defense lawyers to discuss how we can get your charge reduced or dismissed. We have law offices throughout the state of Colorado, including Denver, Greeley, and Colorado Springs.