Vehicle Code 21655.5 VC is the California statute that makes it unlawful for a person to drive in a carpool lane with no passenger. A carpool lane is also referred to as a “high-occupancy vehicle lane.”

(a) The Department of Transportation and local authorities, with respect to highways under their respective jurisdictions, may authorize or permit exclusive or preferential use of highway lanes for high-occupancy vehicles…

(b) The Department of Transportation and local authorities, with respect to highways under their respective jurisdictions, shall place and maintain, or cause to be placed and maintained, signs and other official traffic control devices to designate the exclusive or preferential lanes, to advise motorists of the applicable vehicle occupancy levels, and, except where ramp metering and bypass lanes are regulated with the activation of traffic signals, to advise motorists of the hours of high-occupancy vehicle usage. A person shall not drive a vehicle upon those lanes except in conformity with the instructions imparted by the official traffic control devices…

Examples of illegal acts under VC 21655.5 include:

Luckily, there are several legal defenses that a person can raise if accused of illegally driving in a carpool lane. These include showing that:

A violation of VC 21655.5 is charged as an infraction in California (as opposed to a misdemeanor or felony). The offense is punishable by a fine of $490.00.

Note that a violation does not result in any points being assessed to a driver’s DMV record. 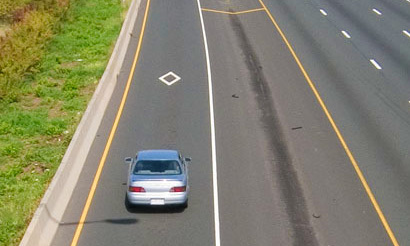 Vehicle Code 21655.5 is the California statute that:

The above rules allow the DOT to mark high-occupancy vehicle lanes as carpool lanes. They also provide the authority to penalize motorists that drive in these lanes without a passenger.2

A person can try to challenge a VC 21655.5 accusation by raising a legal defense. A legal defense may work to reduce or even dismiss a charge.

Vehicle Code 21655.5b states that motorcyclists may drive in a carpool lane, even without a passenger or someone in a sidecar.3 This means that it is always a solid legal defense for an accused to show that, while he may have been driving in a restricted carpool lane, he was operating a motorcycle and not a car.

The facts of a case might show that a motorist had to drive in a carpool lane because of some emergency. Perhaps, for example, the motorist had to pull into a high-occupancy vehicle lane to avoid an accident. These emergency situations do provide for a defense to VC 21655.5 accusations.

If a person was stopped or arrested for violating VC 21655.5, and there was no probable cause, then any evidence obtained following the improper stop/arrest could get excluded from the case. This exclusion could result in the dismissal or reduction in charges.

A person caught driving in a carpool lane without a passenger will be charged with an infraction under California law. The offense is punishable by a fine of $490.00.4

Note that a violation does not result in any points being assessed to a driver’s DMV record.

There are three laws related to the unauthorized driving in a carpool lane. These are:

Vehicle Code 21651a VC is the California statute that prohibits drivers from driving on, or crossing over, the dividing section on a divided California roadway. The section also restricts turns on divided roadways.5

A driver in violation of VC 21651a will receive two penalties. These are:

A driver could potentially get a negligent operator license suspension if he receives a certain number of points in a given time period (e.g., 4 points in 12 months, 6 points in 24 months or 8 points in 36 months).

Vehicle Code 21651b is the California statute that makes it a crime for a motorist to drive on the wrong side of the road.7

Driving on the wrong side of the road is a “wobbler” under California law. A “wobbler” is a crime that can be punished as either a misdemeanor or a felony.

Whether a violation of VC 21651b results in a misdemeanor or felony depends on whether anyone was hurt or killed because of the violation.

Vehicle Code 21659 is the California statute that makes it unlawful for motorists to drive unsafely on the State’s three-lane highways. This essentially means a motorist can only drive in the center lane, or far left lane, of such highways in limited circumstances.8

A motorist that violates the statute will also receive one point on his DMV driving record.10

For similar charges or allegations in Nevada, please see our article on: “Beating a “Carpool Violation” ticket in Nevada (NRS 484B.323).”