Penal Code 538d PC is the California statute that makes it a crime fraudulently to pretend to be, or to impersonate, a police officer. This section is a misdemeanor that carries a penalty of up to one year in jail and a fine of up to $2000.00.

A violation of this statute is a misdemeanor. This is opposed to a felony charge or an infraction. 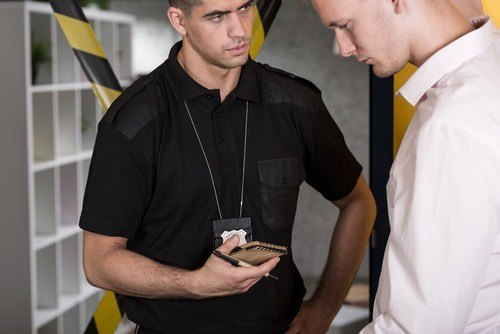 1. When is impersonating a police officer a crime?

A prosecutor must prove the following to convict a person of this offense:

Note, though, that a defendant will only be guilty under this statute if he also:

The term "fraud" refers to a deliberate act that is designed to:

Example: Marcos is concerned about an increase in vandalism in his neighborhood. He borrows a police uniform from his cousin and conducts “nightly patrols.” His intent is to make potential criminals believe there is extra police presence in the area.

Here, Marcos is guilty of impersonating an officer. He wore a police uniform and badge and did so with the intent to fraudulently make other people believe he was an officer.

A defendant can try to beat an impersonation charge with a good legal defense.

Recall that a person is only guilty under this statute if he acts with some type of fraudulent intent. It is a defense, therefore, for an accused to say there was no fraud. Perhaps, for example, a defendant wore a police insignia:

A person is not guilty under this statute if:

This is an exception to the general law specifically set forth in Penal Code 538d.

2.3. No impersonation of a police officer

These laws only apply to the impersonation of a police officer. A person cannot be charged under this statute for impersonating some other professional (e.g., a fire fighter). Note, though, that the person might be charged in such an event under some other California statute.

A violation of Penal Code 538d is a misdemeanor.

If a defendant violates this law by using a uniform, insignia, emblem, device, label, certificate, card or writing of a peace officer, the potential penalties are:

If a defendant violates the statute by using a police badge, the offense is punishable by:

Note that uniform vendors that violate this statute can be hit with a $1,000 fine.8

An impersonating an officer conviction does not impact a person's immigration status.

Sometimes non-citizens can be:

after being convicted of a California crime.

PC 538d violations, though, do not have this effect.

A person can get an expungement if convicted under this statute.

A judge can award an expungement if the defendant successfully completes:

An expungement is favorable since it:

A conviction of these laws does not hurt a person's gun rights.

California law says that some crimes, like felonies, will prohibit a person from:

Impersonating a police officer, though, will not produce either of these results.

There are three crimes related to impersonating an officer. These are:

Penal Code 529 PC is the California statute that defines the crime of “false impersonation.” The crime is committed when someone:

Note that no harm has to occur for a person to commit a crime under PC 538d. The offense is complete by the wearing of a uniform or badge.

Penal Code 148 PC is the California statute that makes it a crime for a person to:

It is not a defense, though, if a person is:

Penal Code 530.5 PC is the California statute that defines the crime of identity theft.

As with Penal Code 538d, a prosecutor must prove a fraudulent intent under this statute.

For information on impersonating a police officer in Nevada or Colorado, please see our articles on: