Penal Code 405a PC is the California statute that makes it a crime for a person to remove someone from police custody by means of a riot. The offense is charged as a felony. Penalties can include up to four years in county jail.

405a. A person who participates in the taking by means of a riot of another person from the lawful custody of a peace officer is guilty of a felony, punishable by imprisonment pursuant to subdivision (h) of Section 1170 for two, three, or four years.”

Note that this offense was previously called “lynching.” But the California governor struck the term “lynching” from the statute in 2015 in SB 629. This was due to its connotation with the more serious crime of a mob seizing and hanging a person, in particular African Americans in the old South. Other than omitting the word lynching, the statute remains the same.

A defendant can challenge an accusation under this statute with a legal defense. Common defenses include:

A violation under these laws is charged as a felony. This is opposed to a misdemeanor or an infraction. 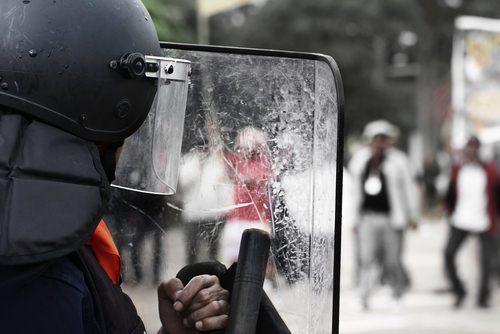 Penal Code 405a PC makes it a crime to remove someone from police custody by means of a riot.

1. Is it a crime to take someone from police custody?

A prosecutor must prove the following to convict a person under PC 405a:

A “riot” occurs when two or more people act together to do any of the following:

Note that a person that gets taken from custody by a riot can also be guilty of this offense. This is provided that he instigated or encouraged the riot.3

Example: Marcos is arrested by police during a break at a concert. Marcos starts shouting things like, “abuse of power, “and “they have the wrong man.” He starts heckling the cops and demands that he’s “free and innocent.” Other concert goers begin to surround the police and soon start rioting and free Marcos.

Here, the concert goers are guilty under Penal Code 405a. But Marcos is guilty as well since he started the riot.

Also note that knowledge is not an element of proof under this statute. This means that a prosecutor does not have to show that:

Defense attorneys use several legal strategies in attacking charges under this statute. These include showing that:

Recall that a person is only guilty under these laws if he participated in a riot. Further, “riot” has a specific legal definition. This means it is a legal defense for an accused to show that he/she was not rioting. Perhaps, for example, an accused was just in a crowd of onlookers as someone escaped from custody.

There has to be a person in custody in order for these laws to apply. Therefore, it is always a defense for an accused to say that, while he/she may have been rioting, no one was in custody. Again, though, the defendant may still be guilty of rioting, per Penal Code 404.

A judge may award a defendant with felony (or formal) probation in lieu of jail time.

A conviction of this offense may have negative immigration consequences.

The commission of an aggravated felony can result in a non-citizen being either:

This means a conviction could hurt a defendant’s immigration status if the facts of the case are so harsh that they show the accused committed an aggravated felony.

A person can get an expungement if convicted of this crime.

An expungement is available provided that the defendant successfully completes the imposed:

A judge may even expunge a conviction if the defendant violated probation.

There are three crimes related to taking a person from custody by a riot. These are:

Penal Code 404 PC is the California statute that makes it a crime for two or more people to riot.

The definition of “riot” is provided above in section 1.

California Penal Code 4550 PC makes it a crime for a person to:

A “prisoner” may include:

Penal Code 69 PC is the California statute that defines the crime of “resisting an executive officer.” This section makes it a crime for a person to use threats or violence to: