The Ventura County Main Jail…also known as the Ventura Pre-Trial Detention Facility…currently houses about 890 male and female inmates.  This Jail

Inmates who are a part of the “general population” are housed

Female inmates are housed exclusively at the Pre-Trial Detention Facility.

In this article, our Ventura County criminal defense attorneys1 will explain the following: 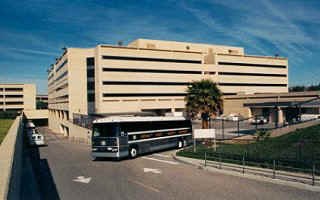 “Bail” is the amount of money that a defendant (or typically someone on his/her behalf) must pay in order to be released from jail.  It is intended to assure the arresting agency and court that the defendant will appear in court as expected.

Ventura County accepts a wide variety of bail payments, many of which are discussed in detail in our article on How to Post Bail in California.  If you choose to post bail for an inmate housed at the Pre-Trial Detention Facility, you may do so 24 hours a day / 7 days a week at the Jail which is located at

When you pay or “post” cash bail, you pay the full bail amount (in the exact amount, as the Jail does not give change).  Once you post cash bail, the inmate is released pending his/her arraignment.  If the inmate attends his/her court appearances, the bail will be returned following the conclusion of the criminal case (minus a small administrative fee).  If the inmate does not attend those appearances, he/she forfeits your money to the court.

Similar to cash bail, if you opt to use a check, you must post the entire bail amount.  Ventura County accepts

Money orders must also be made payable to the Ventura County Superior Court and must be for the exact bail amount.

Ventura County subscribes to “Gov Pay” which allows people to post bail via the web…or over the phone at (888) 604-7888…for inmates who have been arrested on misdemeanor charges.  If you wish to post bail in this fashion, you may use a credit card (or debit card) and must know the inmate’s

Bail bonds are the most common way to post bail, as they only require you to pay a nonrefundable maximum of 10% of the total bond.  You obtain a bail bond from a bail bondsman (aka a bail agent).  If the defendant makes all of his/her court appearances, you pay nothing on top of the 10%, but you do not get that 10% back…it is the bondsman’s nonrefundable fee.  If the inmate doesn’t make those appearances, you will be liable for repaying the entire bail amount to the agent.

Local bail bondsmen advertise via the Internet and in the phone book.  Make sure you verify the bondsman’s license and retain copies of any documents for your records.

∗NOTE:  Once you post bail, you should immediately consult with a skilled Ventura criminal defense lawyer who can schedule a bail hearing to argue that the bail should be reduced or eliminated.  One of our experienced local attorneys can also help devise the most effective legal defense to help your loved one fight his case.

In order to ensure you receive accurate information, you should know the inmate’s full name, date of birth and/or booking number.

you may visit the Ventura County case information website.

3. How to Contact an Inmate at the Ventura County Main Jail

Inmates at the Ventura Pre-Trial Detention Facility are allowed to make free outgoing local phone calls to arrange for bail, inform family members as to their whereabouts and contact an attorney.  Thereafter, calls must be made on a collect basis or placed with a calling card or pre-paid calling account.  Inmates are not allowed to receive incoming calls.

If you wish to set up a pre-paid calling account for an inmate, you may do so online via Global Tel∗ Link, or you can call Global Tel at (800) 483-8314.  Pre-paid credit is available in increments of $25 and $50.  In order to make sure that the correct inmate receives the credit, be sure to specify the inmate’s booking number and full name.

∗Note – calling cards and pre-paid phone credit accounts are typically only for sentenced inmates.  Inmates who are simply awaiting their arraignment are generally released in 48 hours or less and are not housed long enough to take advantage of these services.  Their calls must therefore be placed on a collect basis.

If you have a loved one in the Pre-Trial Detention Facility, you may want to contact your local telephone carrier to make sure that collect calls, calling card calls and calls placed via Global Tel∗Link are not blocked on your telephone plan.

The good news is that contact with inmates at the Jail is not limited to phone calls.  You can also visit an inmate in person or correspond via mail.  These options are discussed in the next two sections.

Inmates at the Ventura Main Jail are generally permitted to have two 30-minute visits per week.  Up to two (2) people may participate in each visit (either 2 adults or 1 adult and 1 child).  Children must be accompanied by a parent, grandparent or legal guardian.

Check-in takes place one hour prior to the session’s start time and two hours prior to the Sunday afternoon start time.  Visits are on a first-come, first-served basis.

Due to ongoing Covid-19 concerns, N95 masks are required to be worn by all visitors. Visitors are also required to follow social distancing guidelines.

Specific visiting schedules vary within each housing unit.  Because of this, it is advisable that you contact the Jail at (805) 654-3335 prior to your anticipated visit to make sure that you arrive at the appropriate time.  Currently, the schedule is as follows:

Attorneys are not bound by the Jail’s visiting hours.  They may visit their clients 24 hours a day / 7 days a week.

All visitors are subject to a search of their person and property.  Anyone who has been booked into a Ventura County Jail may not visit any inmate for a period of one calendar year from their date of release.

Visitors are not permitted to bring anything to the inmates other than one pair of prescription eyeglasses which must be given directly to a Jail staff member.  In addition, visitors are not allowed to:

In fact, the only personal items visitors are permitted to bring into the visiting area are keys, an I.D. card and one baby bottle and/or blanket if they are accompanied by an infant.

The bottom line is that the staff at the Ventura Pre-Detention Facility reserves the right to deny entry to anyone who they believe poses a safety threat to the staff or inmates at the facility.

5. Rules and Regulations Regarding Mail Correspondence at the Ventura County Main Jail

Postcards are the only acceptable form of incoming or outgoing mail for inmates at any of the Ventura County Jails.  Inmates may send and receive an unlimited number of postcards as long as they meet the guidelines set forth below.

All postcards must be properly addressed as follows:

Be sure to include a return address…if you do not, your mail will not be delivered.  Similarly, postcards that meet any of the following criteria will be returned to sender (or stored with the inmate’s property):

Paperback books, newspapers and magazines are the only packages that inmates may receive…and that is only if they are mailed directly from the publishing company or a reputable online distributor such as Amazon.com or BarnesandNoble.com.

When you put money “on the books” for an inmate at the Ventura County Main Jail, it means that you create or contribute to an “in-house” bank account that allows the inmate to make purchases at the Jail’s commissary.  Such purchases may include snacks, drinks, over-the-counter medicine, hygiene items, postcards and pre-paid calling cards.

Any money that is in the arrestee’s possession at the time of arrest will be placed into this account.  If you would like to add to this account…or create one for an inmate who was arrested or transported with no money…you may do so through TouchPay payment systems.

TouchPay accepts credit and debit cards as well as electronic checks.  If you wish to pay with cash, you must do so at the Jail’s kiosk.  ∗Note that there is a service fee for using TouchPay’s services.

If you wish to avoid these fees, you may deposit cash only in-person to a Jail staff member at any of the following locations, depending on which is most convenient for you:

The Ventura Main Jail offers a variety of services to its inmates.  Examples of some of these services include:

∗Note that these services are for inmates who

8. The Procedures on “Return of Property” for the Ventura Pre-Trial Detention Facility

When an inmate is booked into the Ventura Pre-Detention Facility, his/her belongings are collected and stored.  This property is returned to the inmate once he/she is released.  Alternatively, an inmate may allow another individual to come and claim his/her property.

This process may be completed during a regular visit and does not need to be arranged ahead of time.  Simply speak with a deputy who will contact the inmate to obtain verbal authorization for you to collect his/her property.  Be prepared to wait, because this process could take hours if the deputies are taking care of other business.

If you wish to obtain an inmate’s property outside of visiting hours, you may do so 24 hours a day / 7 days a week.