Penal Code 118.1 PC is the California statute that makes it a crime for a peace officer to make a knowingly false statement in a crime report. Normally, a false assertion is only a crime if made under declaration of perjury. This section makes it a crime even if the officer did not certify it as true of sign the report under penalty of perjury.

A violation of this code section is a wobbler offense. This means a prosecutor can charge the crime as either a misdemeanor or a felony.

Specifically, PC 118.1 states that "every peace officer who files any report with the agency which employs him or her regarding the commission of any crime or any investigation of any crime, if he or she knowingly and intentionally makes any statement regarding any material matter in the report which the officer knows to be false, whether or not the statement is certified or otherwise expressly reported as true, is guilty of filing a false report punishable by imprisonment in the county jail for up to one year, or in the state prison for one, two, or three years.”

An officer can fight a false reporting charge with a legal defense. A few common defenses are:

As a felony, the offense is punishable by: 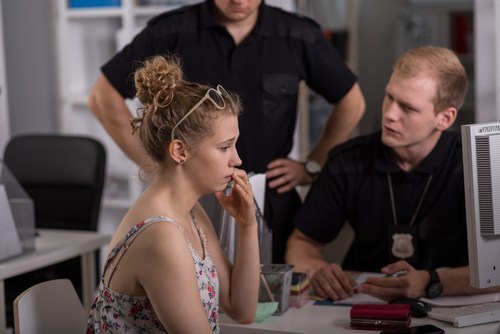 It is a crime for a police officer to file a false report on a criminal matter.

1. When is filing a false report a crime?

Penal Code 118.1 PC is the California statute that makes it a crime for a police officer to file a false report on a criminal matter.1

A prosecutor must prove the following to prove a case under this code section:

Note that if the above are proven true, an officer is guilty even if he did not sign the report under penalty of perjury.

This law only applies to those reports an officer files when he is acting as a police officer. It does not apply to any reports that he makes in his personal capacity.

In addition, it only applies to those reports he makes to the agency that employs him.

Example: Nicole is an officer with the LAPD. She writes two reports. One in her personal capacity on the recent rise in crime that she presents to her son's grade school class. The other is on a criminal matter for the FBI.

Here, Nicole is unlikely guilty of a crime if she includes false information in either report. The first report is written in her personal capacity. The second is written for the FBI and not the LAPD.

This code section only applies to criminal matters. Many times, police officers write reports in connection with purely civil or administrative matters, such as:

If an officer is not reporting on a crime specifically, this section does not apply.

For a guilty charge under PC 118.1, the false statement must be "material." This means it must relate to something of significance or importance. This is opposed to a matter that is trivial or incidental in nature.3

Example: San Francisco police officer Jones is eating lunch at a diner. He gets a report of a shooting. He races to the crime scene and does not see the suspect. He later files a report. In it, he says he was eating in his car when he learned of the crime.

Here, Jones is not guilty of a crime. While it is false that he was eating in his car, this is of a trivial matter. He would be guilty, though, if he reports that he saw the suspect when he arrived at the crime scene. This is false information of a material matter.

An officer is only guilty under this law if he knowingly enters false information.

According to California criminal law, a person acts knowingly if he understands that facts exist which bring his actions within the provisions of this code section.4

Police often write their reports hours or even days after witnessing or investigating a crime. Memory does fade and falter. Honest mistakes in reporting are not criminal.5

Example: Nia is a San Diego police officer. She gets called to the scene of an assault case. The victim has a bloody nose. Nia files a report later that day and does not remember where the victim was bleeding. She states in her report that she believed the victim had blood over one eye.

Here, Nia is not guilty of a crime. While she was wrong in reporting on the location of the blood, this falsity was due to a mistake in recollection. She did not knowingly falsify the information.

There are legal defenses to filing a false police report...

A defendant can raise a legal defense to challenge an accusation under this statute.

An officer is only guilty under this law if he knowingly includes false information in a report. This means it is a defense for an accused to show that:

2.2. Falsity relates to an immaterial matter

There can only be a PC 118.1 guilty charge if an officer falsified information on a material matter. This is opposed to information that is deemed trivial in nature. Therefore, it is a defense for a defendant to show that the false information was not on anything material to the case.

A police officer is not guilty of a crime if:

An officer is only guilty for his own false information.

Example: Marcos is an officer and responds to the scene of a battery. A witness lies and tells Marcos that he saw the suspect hit the victim “with his own eyes.” Marcos includes this information in his report of the case.

Here, Marcos is not guilty under PC 118.1. While his report includes false information, Marcos did not falsify anything. He just recorded a lie that was made by a witness.

A violation of this code section is a wobbler offense. This means a prosecutor can charge it as either a misdemeanor or a felony.

As a felony, the offense is punishable by:

4. Can an officer get a conviction expunged?

An officer convicted of this crime is entitled to an expungement if he:

5. Does a conviction affect an officer's gun rights?

A conviction under this statute may have a negative effect on a defendant officer's gun rights.

6. What can a person do if the victim of a false police report?

There are several things a person can do if he is the victim of a false police report. These include:

There are three laws related to Penal Code 118.1. These are:

Perjury is a crime in California per Penal Code 118 PC. California law defines "perjury" as deliberately giving false information while under oath.

Note that this crime can be committed by:

Malicious prosecution is a civil lawsuit filed by a person that is the victim of another's:

To succeed in the suit, the plaintiff must prove:

Unlike malicious prosecution, a charge under PC 118.1 is criminal in nature and filed by the state.

Note that while PC 118.1 applies to police officers, PC 148.5 applies to only non-officers.