Penal Code 602.1 PC is the California statute that makes it a crime for a person to intentionally interfere with, or obstruct, a public business establishment. This offense is a misdemeanor punished by up to 90 days in jail and a fine of up to $400.00.

602.1(a) states that "any person who intentionally interferes with any lawful business or occupation carried on by the owner or agent of a business establishment open to the public, by obstructing or intimidating those attempting to carry on business, or their customers, and who refuses to leave the premises of the business establishment after being requested to leave by the owner or the owner's agent, or by a peace officer acting at the request of the owner or owner's agent, is guilty of a misdemeanor, punishable by imprisonment in a county jail for up to 90 days, or by a fine of up to four hundred dollars ($400), or by both that imprisonment and fine."

Luckily, there are several legal defenses that a person can raise if accused of violating this section. These include showing that an accused:

A violation is charged as a misdemeanor (as opposed to a California felony or an infraction). The crime is punishable by: 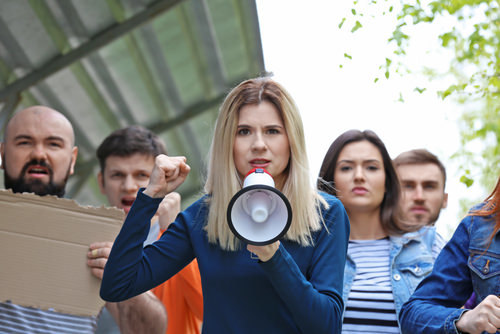 California Penal Code 602.1 PC makes it a crime for a person to intentionally interfere with a public business establishment.

1. What is the legal definition of obstructing a public business establishment?

Penal Code 602.1 PC makes it a crime for a person to intentionally interfere with, or obstruct, a public business establishment.

A prosecutor must prove three elements in order to successfully convict a defendant under this code section. These are that the defendant:

California law defines a “public business establishment” as a commercial or noncommercial entity that is open to and serves the general public.2

Please note that the determination as to whether an accused “obstructed” or “intimidated” a customer will depend on all of the facts in a given case.3

2. What defenses can I assert?

A person accused under 602.1 PC can challenge the accusation by raising a legal defense. A good defense can often get a charge reduced or even dismissed. Please note, though, that it is critical for an accused to hire an attorney to get the most effective defense.

The First Amendment of the United States Constitution protects a person's freedom of speech and the freedom to assemble and petition. Protests that are peaceful in nature and do not obstruct or intimidate with a business or its customers are perfectly legal - under both California law and the Constitution. A solid legal defense, therefore, is for a defendant to show that his actions were peaceful and did not obstruct or intimidate.

Recall that one of the things a prosecutor must show, to convict a person under PC 602.1, is that the defendant was asked to leave but refused to do so. More specifically, a prosecutor must show that a business owner or a police offer asked an accused to leave. This means a defendant has a valid legal defense if he was never asked to leave a business – even if he was obstructing and/or intimidating customers.

A violation of Penal Code 602.1 can result in jail time and/or a fine

A violation of Penal Code 602.1 is charged as a misdemeanor. The crime is punishable by:

There are three crimes related to obstructing a public business establishment. These are:

Per Penal Code 602, a person commits the offense of trespassing when he enters or remains on someone else's property without permission or a right to do so.5

In most cases, trespass is a misdemeanor and is punishable by:

However, certain kinds of trespass in California law may only lead to infraction charges, with a penalty consisting of a small fine.8

And if a defendant commits what is known as "aggravated trespass" -- in which he threatened to injure someone physically and then entered their home or workplace without permission, -- he may face felony trespass charges. This could mean a jail sentence of 16 months, or two or three years.9

California Penal Code 169 PC is the California statute on picketing or parading outside a courthouse.

Under Penal Code 169, it is a crime for a person to picket or parade in or near a courthouse with the intent to either:

A violation of PC 169 is charged as a misdemeanor. The crime is punishable by:

“Intentional interference with prospective economic relations is a type of unfair business practice in California.

To make out a case for IIPER, a plaintiff must prove that:

A person that engages in this act commits a tort and may be held liable in civil court for damages. These damages include compensatory damages, and in some cases, punitive damages.

If you or someone you know has been accused of a crime under California Penal Code 602.1 PC, we invite you to contact us for a free consultation. We can be reached 24/7 at 855-LAWFIRM.