Is a spring assisted knife legal in California?

California criminal defense attorney Neil Shouse explains what spring assisted knives are, and if they are legal in California. A spring assisted knife is a form of folding knife, that uses a mechanism which assists in the opening of the knife after it has been activated by hand. Some types of spring assisted knives are legal, but only if they are not switchblades. The demarcation between spring assisted knives and switchblades can often be subtle, but in general a switchblade is a knife of 2 or more inches that can be released by the flick of a button, and does not require any effort by hand to open. If you need to apply pressure to open the knife, often using two hands, then the knife is probably considered to be a spring assisted knife, and is therefore legal. If someone possesses a switchblade, however, that is a misdemeanor crime punishable by up to 6 months in jail. But there are defenses to the crime that an experienced criminal defense lawyer can use to help fight against charges of illegal possession of a switchblade. These defenses include that the knife was not yours, or that the police violated your rights in searching you or your car or home, and therefore the evidence can be thrown out. And since the definition of legal and illegal knives is so complicated, it’s possible that further examination of the knife by a legal expert, may show that it was actually a legal knife, and the police were wrong. More info at https://www.shouselaw.com/is-a-spring-assisted-knife-legal-in-california or call (888) 327-4652 for a free consultation. If you or a loved one is charged with a crime we invite you to contact us at Shouse Law Group. We can provide a free consultation in office or by phone. We have local offices in Los Angeles, the San Fernando Valley, Pasadena, Long Beach, Orange County, Ventura, San Bernardino, Rancho Cucamonga, Riverside, San Diego, Sacramento, Oakland, San Francisco, San Jose and throughout California.

A spring assisted knife is legal as long as it "opens with one hand utilizing thumb pressure applied solely to the blade of the knife or a thumb stud attached to the blade, provided that the knife has a detent or other mechanism that provides resistance that must be overcome in opening the blade, or that biases the blade back toward its closed position." Penal Code 21510 PC, which is the California statute governing switchblade knives.

According to this code section, it is illegal for a person to do any of the following with a switchblade knife:

““switchblade knife” means a knife having the appearance of a pocketknife and includes a spring-blade knife, snap-blade knife, gravity knife, or any other similar type knife, the blade or blades of which are two or more inches in length and which can be released automatically by a flick of a button.”

Given this definition, a “spring assisted knife” may fall outside of the definition of switchblade under California law.

A violation of California's switchblade laws is a misdemeanor offense. The crime is punishable by either:

Please note that, depending on the particular type of knife in question, it could also be against the law per Penal Code 21110 PC, California's law regarding ballistic knives.

According to California Penal Code 16220, a “ballistic knife” is a knife with a spring-loaded blade that can be fired, or shout out, like a bullet. 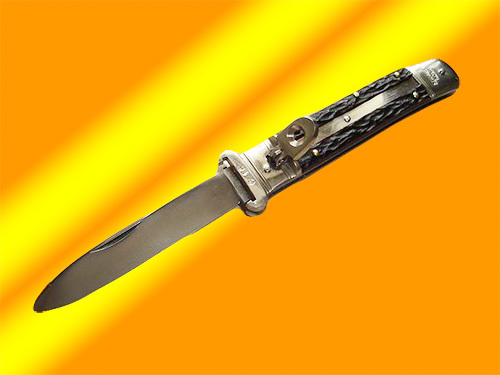 Are there legal defenses that a defendant can raise if accused under Penal Code 21510?

A defendant can raise a legal defense to challenge a charge under PC 21510. A good defense can work to reduce or even dismiss a charge.

Are spring assisted knives against the law in California per Penal Code 21110?

PC 21110 is the California statute governing ballistic knives. According to this code section, it is a crime for a person to make, import, sell, give, or possess these weapons.

According to California Penal Code 16220, a “ballistic knife” is a knife with a spring-loaded blade that can be fired, or shout out, like a bullet.

A violation of PC 21110 is a wobbler offense under California law. This means it can be charged as either a misdemeanor or a felony.

What knives can be lawfully carried in California, either openly or concealed?

Under California law, certain knives may be lawfully carried in the State - either openly or concealed. This is provided that the blade on the knife is not exposed and locked into position.

Knives that can be legally carried include:

If the blade is exposed and locked into position, an otherwise legal folding knife becomes a dirk or dagger under California law. In such a case, it must be worn openly in a sheath suspended from the waist.