Can I openly carry a loaded gun in Colorado?

Denver Colorado criminal defense attorney Michael Becker discusses Colorado’s “open carry” firearm laws. Learn more about Colorado Legal Defense Group at https://www.shouselaw.com/colorado/weapons/guns/CO_open_carry.html or call (303) 222-0330 for a free consultation. CAN I OPENLY CARRY A LOADED GUN IN COLORADO? Yes, as long as you are at least 18, not otherwise prohibited from carrying a firearm, are not under the influence of drugs or alcohol, and are not in the city or county of Denver, Colorado. People who are legally prohibited from carrying a firearm in Colorado include (but are not limited to) convicted felons, people subject to a domestic violence restraining order, people with a domestic violence conviction, drug addicts, people who have been committed to a mental institution, undocumented immigrants, or vets who have been dishonorably discharged from the military. Note that you may not carry a firearm on federal property, on public transportation, or on school or university grounds in Colorado. Also note that in Colorado, even in Denver, you may legally possess and carry a firearm on your own personal property, and you can carry a loaded handgun in your vehicle (but long guns must be unloaded). Unless you are a convicted felon, a violation of Colorado’s open carry law is typically a misdemeanor. COLORADO LEGAL DEFENSE GROUP If you or a loved one is charged with a crime we invite you to contact us at Colorado Legal Defense Group. We can provide a free consultation in office or by phone. We serve Denver, Lakewood, Littleton, Aurora, Colorado Springs, Fort Collins, Pueblo, Boulder, Broomfield, Grand Junction, Eagle, Aspen, Breckenridge, Vail and throughout Colorado. Colorado Legal Defense Group 4047 Tejon Street Denver CO 80211 (303) 222-0330 https://www.shouselaw.com/colorado

Colorado permits the open carry of most firearms

Colorado is an “open-carry” state, with some exceptions. Denver generally prohibits the open carry of firearms. Certain people are forbidden from carrying a gun anywhere. (Such as convicted felons, minors, or drug addicts.) And no one in Colorado may ever possess a machine gun, short shotgun, or short rifle.

Colorado has no express laws about the right to openly carry a firearm. But the right to possess a gun is generally protected under Article 2, Section 3 of the Colorado constitution. It provides:

All persons have certain natural, essential and inalienable rights[.] [A]mong which may be reckoned the right of enjoying and defending their lives and liberties[.] [O]f acquiring, possessing and protecting property[.] [A]nd of and of seeking and obtaining their safety and happiness. 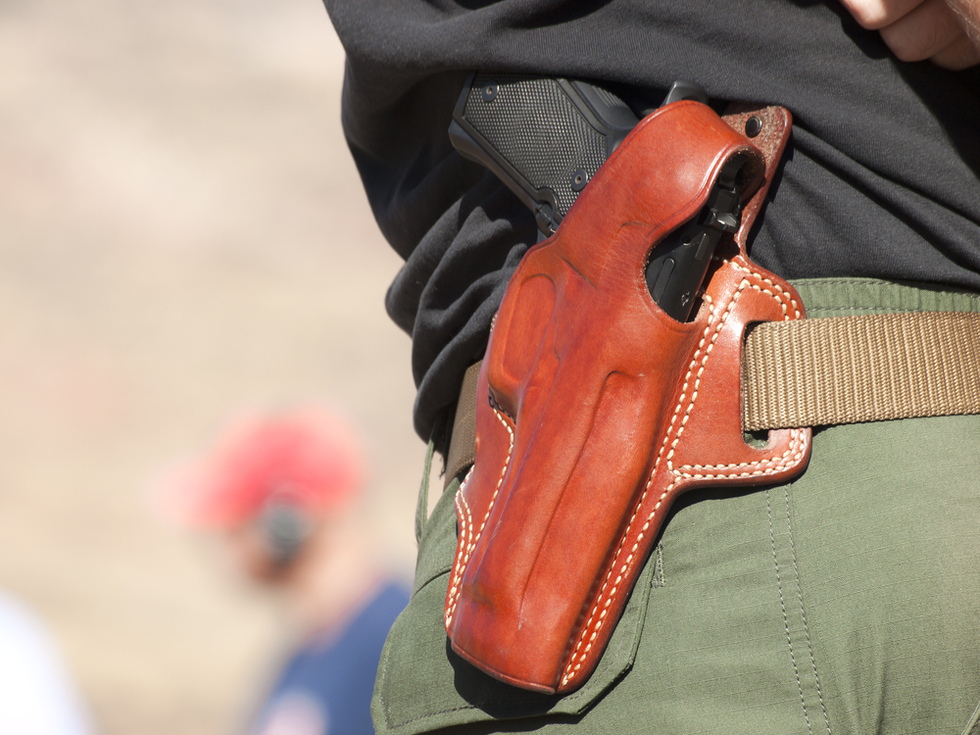 In general, Colorado is an open carry state. But there are exceptions.

1. Who may not openly carry a gun in Colorado?

You may openly carry a firearm unless:

2. Does a CCW permit allow me to openly carry a weapon?

Your Colorado CCW permit has nothing to do with open carry. However, if you possess a concealed carry permit, you may carry weapons both openly and concealed wherever not prohibited by law.

Colorado is a “must-issue” concealed carry permit state. The state will issue a CCW permit to anyone who:

3. What are the penalties for gun violations?

Open carry is legal in Colorado (other than in Denver). So there are no penalties. Unless you openly carry a prohibited weapon. Or are legally prohibited from possessing a handgun.

A first time violation of carrying a prohibited weapon (CRS 8-12-106) is a class 2 misdemeanor. The sentence is:

A second violation within five years of another Colorado gun charge is a class 5 felony. Punishment can include:

Unlawful possession of a weapon by a previous offender (POWPO) is a felony under CRS 18-12-108. Punishment can include:

First-time possession of a handgun by a juvenile under 18 is a misdemeanor. But repeated offenses are felonies.

Under Article 20, Section 6 of the Colorado Constitution, local cities and counties have the right to pass laws affecting their own jurisdictions as long as they do not directly contradict state or federal law.

Denver's law was challenged. It was the landmark case Denver v. State of Colorado. The judge sided with Denver. The court noted that “the State's interest in allowing the general open carry of firearms is insubstantial and is far outweighed by Denver's local interest in regulating firearms more strictly in an urbanized area.”

This rule is codified under CRS 29-11.7-104. It provides that a local government may enact an ordinance prohibiting the open or concealed carry of a firearm in a specific type of building or area. As long as signs are posted at the public entrances to the building or specific area.

The law does not limit the right to possess a firearm on private property for self-defense or in vehicles. So long as state law restrictions are observed.

At present, these limitations apply in Denver. But any Colorado jurisdiction may enact similar restrictions.

Charged with violating Colorado gun laws? Our experienced Colorado defense lawyers can help. Contact us for a free consultation.

We represent clients throughout the state. Reach us through the form on this page. Or call our Denver home office at (303) 222-0330.