An arrest warrant in Colorado gives police the authority to arrest a person and hold the person in custody. To obtain a warrant, police must go to a judge, magistrate, or grand jury and present probable cause that a crime has been committed by the subject of the warrant.

Arrest warrants should not be confused with other types of warrants:

A criminal defense attorney may ask judges to recall a warrant.

1. What is an arrest warrant in Colorado?

It is a document that allows law enforcement agencies to take a suspect into custody. The warrant will likely include the following details:

Ideally, arrest warrants are supposed to identify the person to be arrested by their name. However, when the name is not known, the warrant has to make a clear description of the suspect. This description has to be clear enough for police to be reasonably certain they are arresting the right person.

When police have an arrest warrant, they can execute it by taking the suspect into custody under its terms.

Seven of the most common grounds for Colorado judges issuing warrants include:

The police department or sheriff’s office needs to show a neutral and detached magistrate that there is probable cause for taking the suspect into custody. For an issuance of an arrest warrant, the affidavit has to be:

These requirements come from federal law: The Fourth Amendment of the U.S. Constitution1 and Article II, Section 7 of the Colorado Constitution.2

2.1. What is a neutral and detached magistrate?

Police have to show probable cause to a neutral and detached magistrate.3

In Colorado, this has to be someone in the judiciary, rather than a law enforcement officer.4 It does not necessarily have to be a superior court judge, though. Other court workers can issue an arrest warrant, including:

Even judges, though, can lose their detachment from a case if they are involved in the investigation or have an interest in it.6

Law enforcement officers have to show there is probable cause that a crime has happened.

The exact definition of probable cause is notoriously vague. What is clear, though, is that police have to show a crime likely happened. It is not proof that the crime occurred, though. It only means that there is a reasonable basis to believe that a crime happened.

Example: Police ask a district court judge for permission to arrest someone who might have committed a carjacking of a motor vehicle. The judge denies the request because that is not probable cause.

Police have to support their claim with concrete evidence that is particular to the current case. That evidence has to be enough for the judge to make a probable cause judgment. It cannot be a general accusation that someone committed a crime. The evidence can include:

Example: A sheriff’s affidavit to a county court says only, “I solemnly swear that Jack committed a DUI.” The affidavit is insufficient for an arrest warrant in criminal cases under Colorado law.7

2.3. What are felony indictments?

In some cases, prosecutors choose to go through a grand jury to obtain an arrest warrant. This does not happen very often. And it can occur only in felony cases.

Should they choose this path, law enforcement will have to show probable cause to the grand jury rather than a judge or magistrate. The grand jury consists of either 12 or 23 people. A prosecutor will present evidence that a crime has been committed.

If the grand jury agrees that there is probable cause, they will return an indictment. The prosecutor then brings the indictment to a judge, who can issue the arrest warrant. 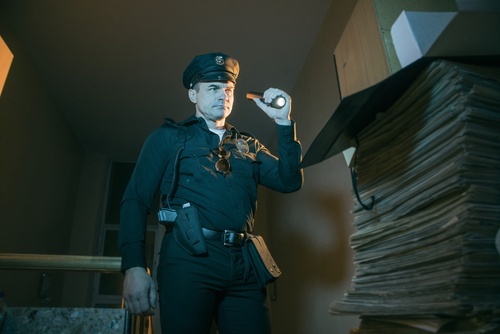 People with an active warrant may be arrested at any time.

3. How do police execute an arrest warrant in Colorado?

Police execute it by:

The person being arrested is brought to the police station, where they are held until the court date for the arraignment. There are only a few days between the arrest and the arraignment.

At the arraignment, the person who was arrested will be told what criminal charges they are facing.

Many arrest warrants have specific instructions about where and when the arrest can be executed. These instructions are often made to keep others safe during the arrest. Police carry out those instructions based on the type of crime and the suspect’s criminal history.

Law enforcement officers often stumble on someone who has a warrant out for their arrest. Any time a police officer asks for someone’s identification, they run the information through their database. If there is a “hit,” police execute the warrant and make an arrest.

Law enforcement can execute an arrest warrant at any time after it has been issued. Warrants remain in effect until:

Warrants do not expire, and they go on the person’s criminal records. It can be months or even years before the suspect is caught.

This often means suspects get arrested on allegations that are several years old. They may have even forgotten about the crime they are being accused of committing.

3.2. Can a Colorado arrest warrant be executed in another state?

An arrest warrant that was issued in Colorado can be executed in another state. And vice versa.

The database of outstanding arrest warrants is a national one. Law enforcement in every state share their information on this database so:

If this happens, they can be extradited to the state where the crime allegedly occurred.

4. When can police arrest someone without a warrant?

Despite the fact that police are supposed to get a warrant prior to arresting, police often apprehend suspects without one. This is because there are so many exceptions to the arrest warrant requirement. These exceptions allow warrantless apprehensions in lots of circumstances, including:

5. Can arrest warrants be challenged?

The evidence obtained after executing invalid arrest warrants can be excluded from trial. Proving invalidity requires showing that:

An arrest warrant that is not valid on its face violates your rights when it is executed. This taints the evidence that it obtains. Any tainted evidence can be kept out of your trial with a motion to suppress. Without the evidence, law enforcement may not be able to prove you committed a Colorado crime.

Note that officers who arrest the wrong person by failing to verify that the arrestee is the person named in the warrant face liability for civil damages.

Also, note that arresting officers do not need the warrant on their person at the time of the arrest. But they should produce it as soon as possible upon request by the arrestee.

Contact our criminal justice law firm for additional legal advice and a free consultation. We can discuss creating an attorney-client relationship.

Are registered sex offenders allowed to travel to Colorado?

Colorado sex offender registry laws usually permit convicted sex offenders from other states to travel to Colorado. However, visitors are considered temporary residents and must therefore register in Colorado if they either: stay for more than 14 days, or stay for more than 30 days in a calendar year Note that visitors must comply with ...

Is your criminal record admissible at trial in Colorado?

What is a PR bond in Colorado?

A PR bond is when a person who has been arrested in Colorado gets released on his or her “own recognizance” without having to pay any money. Different types of bonds in Colorado After a person (the “defendant”) gets arrested on suspicion of a crime, the police will book him or her at the station ...

It is a crime to urinate in public in Colorado. Colorado’s law against public indecency (CRS 18-7-301) makes it illegal to knowingly expose your genitals to someone else in a way that is “likely to cause affront or alarm.” This includes public urination. There are stories that it was recently made legal to urinate and ...