Penal Code 653.22 PC has been repealed. It is no longer a California crime to loiter in a public place with the intent to commit prostitution. Prior to 2023, a conviction was a misdemeanor punishable by up to 6 months in jail and a fine of up to $1000.00.

If you have a past conviction for loitering for prostitution, PC 653.29 allows you to pursue a record seal right away.

The full language of the now-repealed statute read as follows:

653.22. (a) (1) Except as specified in paragraph (2), it is unlawful for any person to loiter in any public place with the intent to commit prostitution. This intent is evidenced by acting in a manner and under circumstances that openly demonstrate the purpose of inducing, enticing, or soliciting prostitution, or procuring another to commit prostitution.

(2) Notwithstanding paragraph (1), this subdivision does not apply to a child under 18 years of age who is alleged to have engaged in conduct that would, if committed by an adult, violate this subdivision. A commercially exploited child under this paragraph may be adjudged a dependent child of the court pursuant to paragraph (2) of subdivision (b) of Section 300 of the Welfare and Institutions Code and may be taken into temporary custody pursuant to subdivision (a) of Section 305 of the Welfare and Institutions Code, if the conditions allowing temporary custody without warrant are met.

(b) Among the circumstances that may be considered in determining whether a person loiters with the intent to commit prostitution are that the person:

(3) Has been convicted of violating this section, subdivision (a) or (b) of Section 647, or any other offense relating to or involving prostitution, within five years of the arrest under this section.

(4) Circles an area in a motor vehicle and repeatedly beckons to, contacts, or attempts to contact or stop pedestrians or other motorists, indicative of soliciting for prostitution.

(5) Has engaged, within six months prior to the arrest under this section, in any behavior described in this subdivision, with the exception of paragraph (3), or in any other behavior indicative of prostitution activity.

These were easy arrests to make because officers did not actually have to catch someone in a prostitution transaction. Thus, it was easy for innocent people to find themselves wrongfully accused.

In this article, our California criminal defense attorneys answer the following key questions:

1. What did it mean to loiter for prostitution?

In order to convict you under 653.22 PC prior to 2023, the prosecutor had to prove the following facts (also known as “elements” of the crime):

Now that 653.22 PC has been repealed, loitering for prostitution is no longer a crime. The act of prostitution itself does remain a crime.1-9

2. How did the state prove a person intended to commit prostitution? 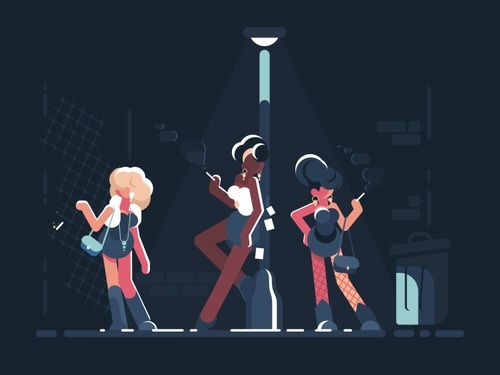 Penal Code 653.22 PC spelled out certain actions that may demonstrate that a person intended to commit prostitution

Penal Code 653.22 PC spelled out certain actions that may demonstrate that a person intended to commit prostitution.  These are:

Judges and juries were also able to consider factors other than the above. For example, they were able to consider behavior that indicated you committed or solicited prostitution in the past even if this behavior took place more than six (6) months before you were arrested.15

Other behavior that could show that you intended to commit prostitution included:

Note that police could not use the fact that the suspect was carrying condoms to form probable cause that the person was loitering for prostitution.18

So you see how much discretion police, prosecutors, and judges and juries had in arresting and convicting people for this section. This kind of law opened the door for police to unfairly target certain groups, neighborhoods, or individuals.19

A conviction for a California sex crime like loitering for prostitution had terrible repercussions for your career and personal life. Though there were a number of legal defenses that could get these charges dismissed:

3.1. Insufficient evidence that you intended to commit prostitution

A completely innocent situation can look like loitering with intent to commit prostitution.

For example, a female under 21 may have been wearing provocative clothing and making conversation with males walking by because she wanted them to buy her alcohol. Or a woman may have been making eye contact with male drivers of passing cars because she enjoyed being flirtatious, or was hoping someone would give her a ride home.

Because this law gave so much discretion to police and judges, a skilled criminal defense attorney was incredibly valuable for fighting charges of loitering for prostitution.

Entrapment happens when a police officer induces a normally law-abiding person to commit a crime they otherwise would not have committed. Arrests are often made by officers operating undercover. This can trigger the entrapment defense.

Entrapment occurs only when a police officer behaves in an overbearing way-for example, by applying pressure, harassment, fraud, flattery, or threats.20

Here is an example involving the now-repealed 653.22 PC:

Maria was nineteen and had been drinking in a bar in a neighborhood where prostitutes sometimes hang out. She was smoking a cigarette outside the bar.

An undercover cop named Frank pulled up in an expensive car and asked Maria if she was working. Maria ignored him. Frank told her that he would like to hire her and would pay her two hundred dollars for half an hour. She continued to ignore him and went back into the bar.

Later, Maria came outside for another cigarette. Frank’s car appeared again. He told her she’s the most beautiful girl he’d ever seen on this street and that he would pay her five hundred dollars for half an hour. Frank showed her a wad of bills. Maria told him he’s wrong about her.

Maria thought about Frank’s extravagant offer while she was at the bar. After the bar closed, she stood on the street outside for a while to see if he would come back. When he did, he arrested her for loitering with intent to commit prostitution.

Frank applied extreme pressure to Maria by offering her a large amount of money. He also used flattery to spark her interest. Maria would not have considered loitering after the bar closed if he had not used these tactics.

This is a classic example of illegal entrapment. With the help of a California criminal defense lawyer who understands the entrapment defense, Maria may have been able to avoid conviction.

4. What were the consequences of a conviction?

Penal Code 653.22 PC was a California misdemeanor.21 If you were convicted of loitering for the purpose of committing prostitution, you faced a maximum one thousand dollar ($1,000) fine and up to six (6) months in a county jail.22

The exact sentence was determined by the judge.

If you were convicted of loitering with the intent of engaging in prostitution in the Sacramento, Fresno, or San Francisco Bay Area regions, you could have been prohibited from using certain public transportation facilities for a period of time. The transit authority must have given you notice and an opportunity to dispute this order before it went into effect.23

5. What similar crimes could a person be charged with?

There are certain other crimes that were often charged along with Penal Code 653.22 PC, loitering with intent to commit prostitution. These included:

5.1. Prostitution and solicitation of prostitution

You can be convicted of prostitution if you

In order to convict you of soliciting prosecution, the prosecutor must prove that you 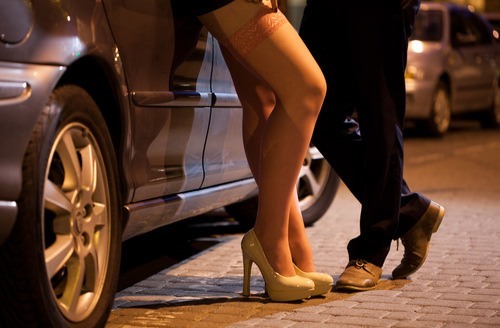 A prior conviction for PC 647(a) PC made it more likely you would be convicted of loitering.

Lewd conduct in public under Penal Code 647(a) PC means touching your or another person’s private parts for sexual arousal, when you know or reasonably should know that there is someone else nearby who would take offense.

City and county governments can impose their own restrictions in line with state law.26-27

5.4. Loitering to solicit the purchase of alcohol

Penal Code 303a PC, California’s law against loitering to solicit the purchase of alcohol, makes it a misdemeanor to loiter outside of an establishment that serves alcohol to be served on the premises (such as a bar or restaurant) for the purpose of persuading other patrons to buy you alcohol.28

Some prostitutes find their customers in bars or clubs and initiate the transaction by persuading the customers to buy them drinks. If you are arrested under circumstances like these, you may be able to get charges reduced to PC 303a charges–which are likely to carry a bit less of a stigma on a criminal record.

6. Did loiterers have immunity if they reported serious crimes?

Yes. As of 2020, people were immune from being prosecuted for loitering if they reported any of the following serious offenses to the police:

In addition to being immune from loitering charges for reporting the above crimes, people were also immune to charges of:

The purpose of granting immunity was to encourage sex workers to report serious crimes without fear that they would be punished too.29

If you or a loved one is charged and you are looking to hire an attorney for representation, we invite you to contact us at Shouse Law Group. We can provide a consultation in the office or by phone.