Is it a crime to drive with an "open container"?

California’s open container laws are found in Vehicle Code sections 23221-23229 VC.  These sections make it illegal for a person to drive with an alcoholic beverage in the vehicle that has been opened  – even if the alcohol is not being consumed.

This offense is typically an infraction, punishable by a maximum $250 fine. 1 2 However, if you are a driver or passenger under 21 and are caught violating this law, you face a misdemeanor, punishable by up to six months in jail and a maximum $1,000 fine.3

The good news is that there are a variety of legal defenses to this charge.  These include (but are not limited to): 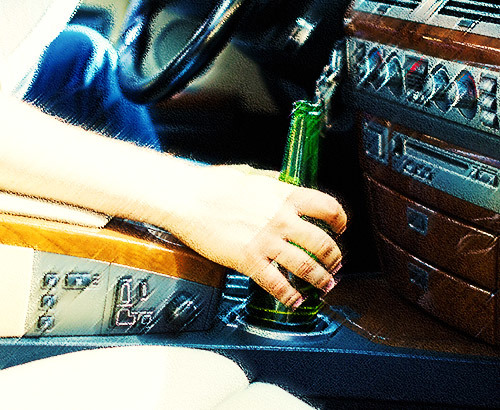 1. What is California law as to driving with an open container of alcohol?

There are a variety of California laws that all essentially prohibit the same conduct:  driving (or riding in) a car with an open bottle, can or other receptacle containing an alcoholic beverage.  These laws are codified in

The word “open” doesn’t literally mean that there is no top on the beverage, but rather that the beverage has

As Orange County criminal defense attorney John Murray5 explains, “This is the case whether or not you…or anyone else in the car…is actually drinking the beverage.  Just having the open container in the car is illegal in and of itself…and the reason we refer to these laws as California’s open container laws.”

But before you can be convicted of this offense, the prosecutor must prove that you possessed the open container. This means that if, for example, you are one of five passengers in a car, you can’t be convicted of violating California’s open container law unless the prosecutor can prove that the container was either on your person or under your control. In other words, it has to be connected to you, not just to the car.6

And if you actually consume the alcoholic beverage while riding in or driving the car, you will be cited under California Vehicle Code 23221 VC, which is an infraction…and possibly for driving under the influence as well (described below in Section 4.1.).7

If you are under 21…the legal age for drinking alcoholic beverages in California…Vehicle Code 23224 VC, California’s law on underage possession of alcohol in a vehicle law, prohibits you from

then those facts will serve as a valid legal defense to the charge.

If these defenses do not apply to your particular case…and you are the registered owner of the car…your car will be impounded for anywhere from one to thirty days.

And all violations of this section subject an offender to

2. Is it possible to fight the ticket in court?

There are a variety of California legal defenses that a skilled criminal defense attorney can present on your behalf – some that are specific to this charge and some that are more general.  A sample of the most common follow.

2.1. The alcohol was in the trunk of the car

you should be acquitted of this offense.9

2.2. The alcohol was in a bus, taxi, limousine, “housecar” or camper

Passengers in or drivers of a bus, taxi, limousine, “housecar” or camper are exempt from prosecution under California’s open container laws for possessing an open container. Passengers in such vehicles are permitted to drink – drivers are not.10

However, if there are minors under 21 in one of these vehicles, California’s open container laws apply, and open containers will not be permitted to be inside these vehicles without being properly stored as indicated above.  The exception lies with limousines, as alcohol may be locked in these cars in an area that is normally occupied by passengers.11

2.3. The officer didn’t have probable cause to investigate you

Even if you did drive with or possess an open alcoholic beverage in violation of California’s open container laws, your charge should be dismissed if the officer who discovered the open container did so without probable cause.

Probable cause under California law means a reasonable belief that a crime is or was taking place.  Probable cause is the government’s way of assuring the public that officers can’t simply stop anyone they wish at any time they wish.  Before the police can stop you, they must be able to point to “specific articulable facts” that validate their belief that you are or were engaged in a crime.

Example: The defendant and a companion are parked in a car in her driveway which is visible from the street.  As cops drive by, they see her drinking a beer and approach the vehicle to cite her for VC 23222(a).  The police ask the defendant and passenger to exit the car and, after they do, one of the cops spots a jar of PCP.

Because a private driveway does not qualify as a highway or other “lands” as defined under California’s open container law, the police did not have probable cause to approach the car in the first place, as no crime was being committed.  As a result, neither the open container nor the PCP were allowed into evidence and, as a result, the charges were dismissed.12

2.4. The open container was discovered during an illegal search and seizure

Similarly, even if you are technically guilty of the violation…but the officers only discover the open container because they violated California’s search and seizure laws, then we should be able to get the charge dismissed for just that reason.

This means that if the police discover the open container

then it may be possible to get the evidence excluded and the case dismissed. 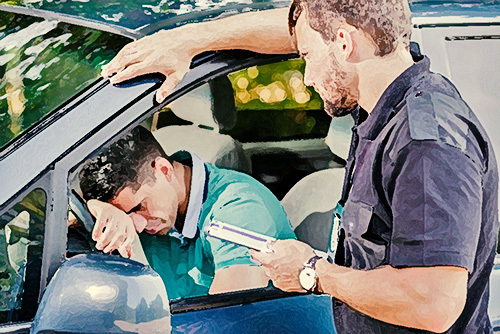 3. Are these criminal offenses or infractions?

California’s open container laws are California infraction charges, which means they do not carry jail time but are only punishable by a maximum $250 fine.13 The exception to this rule applies to underage possession of alcohol…a California misdemeanor offense…whose penalties are noted above under Section 1.1. Regarding minors: Vehicle Code 23224 VC.14

But as insignificant as this may seem, these violations will also likely result in points on your California DMV record and…if charged in connection with a DUI…will probably cause a prosecutor and/or judge to sentence you to a mandatory jail sentence.

There are a number of offenses that are closely related to California’s open container laws because they are either charged in connection with or in lieu of these charges.  The following are three of the most common:

4.1. Vehicle Code 23152 VC California’s law against driving under the influence

So, for example, a first-time DUI offender who might not otherwise be required to go to jail may have to serve at least 48 hours if he/she was caught either drinking or carrying an open container of alcohol at the time of the offense.

The following is an example of how this charge would come into play with an open container charge.

Example: The LAPD receives a call that a driver is passed out in his car in traffic lanes in downtown L.A.  Officers approach the car and find the driver slumped behind the steering wheel with the car lights off, the engine running and a whiskey bottle, nearly empty, on the seat beside him.

Given these facts, the police are justified in arresting the driver for being drunk in public and in citing him for violating California’s open container laws.17

4.3. Vehicle Code 23222(b) California’s law against driving in possession of marijuana

If you or a loved one is charged with Vehicle Code Sections 23221 – 23229 VC open container and you are looking to hire an attorney for representation, we invite you to contact us at Shouse Law Group. We can provide a free consultation in office or by phone. We have local offices in Los Angeles, the San Fernando Valley, Pasadena, Long Beach, Orange County, Ventura, San Bernardino, Rancho Cucamonga, Riverside, San Diego, Sacramento, Oakland, San Francisco, San Jose and throughout California.

I have a past conviction for possessing/selling/cultivating marijuana. Can I get my pot conviction dismissed now that marijuana is legal in California?

What is an arraignment?