A Bivens claim is a civil rights lawsuit for monetary damages against federal officials. Victims can file a lawsuit if their civil rights have been violated by a federal worker.

The claim allows victims to recover compensation for their losses. It relies on an implied cause of action for civil rights violations. This means victims cannot pursue a Bivens lawsuit if there is another remedy. 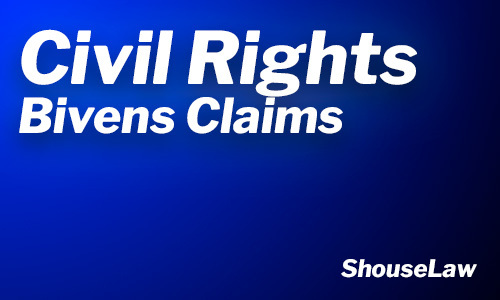 A Bivens claim is a civil rights lawsuit. Victims can file one if their civil rights have been violated by a federal agent. Successful claims lead to monetary damages. The federal officer can be held personally liable.

Bivens claims get their name from the court case that created them.1 They are different from other lawsuits that were created by a statute. Instead, courts created the lawsuits by implying a cause of action. The claim provides a remedy when federal agents violate federal law.

Victims can file an action against a federal officer who violated their civil rights. Civil rights are rights guaranteed by federal law or the U.S. Constitution. Examples of civil rights violations that can lead to liability include:

Bivens claims are very similar to civil rights claims under 42 U.S.C. Section 1983. However, Section 1983 claims only apply to wrongdoing by state officials, not federal ones.5

2. What is an implied cause of action?

Courts only imply a cause of action as a last resort, however. If there is any other remedy available, they will refuse to imply one. They will also refuse to imply one if there are reasons not to. Bivens cases are no exception. If there is an alternative remedy available, courts will dismiss the lawsuit. They will also dismiss the claims if there are reasons to do so, such as when:

3. Against whom can I make a Bivens claim?

Bivens claims can be filed against individual federal officers. These officers have to work in agencies that are not protected from lawsuits. Officers susceptible to a claim include:

Some agencies are shielded from lawsuits by federal law. Certain federal statutes and regulations provide the exclusive remedies that victims can recover against these agencies.

When Congress did not provide a remedy for specific civil rights violations, victims cannot succeed in a claim.12 They also cannot pursue a Bivens lawsuit if there is an alternative remedy, however inadequate.13

In many cases, this is because the Federal Torts Claims Act already provides a remedy against them. However, the workers at these agencies can be sued as individuals.

Non-government parties cannot be sued in Bivens actions. This includes:

These people and companies can already be sued in court. Therefore, Bivens actions do not apply to them. There is already another remedy for victims to use.

Bivens lawsuits can be filed in state court. However, the federal official being sued has the right to remove the case to federal court.17

5. What damages could I receive?

These actions aim to recover monetary damages from federal agents. This includes compensation as well as punitive damages.

The compensation aims to cover the victim's:

Punitive damages, on the other hand, aim to punish the offending government official. They are typically only reserved for the most egregious conduct.

Attorney's fees are not recoverable in a Bivens lawsuit.18 This is one of the ways that the cases are different from cases filed under 42 U.S.C. Section 1983.