Is it Illegal to Leave a Dog Unattended in the Car?

About 31 states in the U.S. have laws that make it a crime for a person to leave an animal confined in a vehicle under dangerous conditions (such as extreme hot or cold temperatures or lack of ventilation). Some of these states include

Depending on the state, a violation of these laws could lead to misdemeanor charges.1

Even if a state does not have one of these laws, it is possible that a person could still be charged with a crime for leaving a dog unattended in a vehicle under a state animal abuse and animal cruelty law.

Note that some states have laws that allow persons to rescue animals that are confined in parked vehicles under hazardous conditions. These persons may include local law enforcement officers and firefighters. Some states even say that any person can rescue an animal.

Under California law, Penal Code 597.7 PC makes it a crime for a person to leave a dog in an unattended motor vehicle if the conditions would endanger the animal’s health or well-being.

Relevant considerations include the: Most states outlaw leaving animals confined in a vehicle under dangerous conditions (such as in a hot car, which can cause heatstroke).

Is it illegal for dog owners and pet owners to leave their animals in a car?

The majority of U.S. states have laws in place that prohibit pet owners from:

Some of the states with these laws include:

Some state laws specifically declare that the following conditions “endanger” an animal’s life:

Other laws only state that a pet cannot be left in a vehicle if conditions pose:

Further, some state laws only protect dogs and cats while others protect a broader category of “animals.”5

Note that animal abuse and cruelty laws make it a crime for a person to maliciously harm an animal. This means that a person could be charged under these laws in the event he/she:

What are animal rescue laws?

Some states have laws that allow persons to rescue animals that are confined in a parked vehicle under dangerous conditions.

Some states, though, say only the following persons can perform such a rescue:

Other states (about 15) have good Samaritan laws that allow any person to rescue an animal if it is suffering from life-threatening conditions in a car. 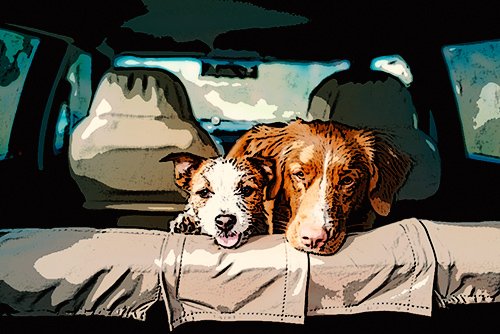 If a person violates PC 597.7, and the animal does not suffer great bodily injury, then he/she is charged with an infraction and must pay a $100 fine.

Penal Code 597.7 PC is the California statute that makes it a crime for a person to:

The law states that the following conditions may endanger an animal:

Further, the law is not limited to just dogs and cats. It applies to “an animal.”8

If a person violates PC 597.7, and the animal does not suffer great bodily injury, then he/she is charged with an infraction and must pay a $100 fine.9

A violation of the law that results in great bodily injury to the animal is charged as a misdemeanor. The crime is punishable by:

Note that this California statute also sets forth laws on animal rescue. These laws state that:

This danger can come from:

What are some ways to keep a pet safe in a car?

Pet owners should consider doing some of the following when leaving their animals in a parked vehicle:

We love our pets and treat them with care and attention, and try to protect them from harm. California’s laws also try to protect animals from cruelty and abuse, and provide some of the harshest penalties in the nation for those convicted of animal abuse. Animal abuse in California is a serious offense with serious ...

Is Wag or Rover Liable If a Dog Walker Loses or Injures My Dog?

The new dog-walking “apps” Wag! and Rover can be a life-saver for man’s best friend. But what happens when a dog walker loses your dog or a dog is injured while under the walker’s care? In March, the New York Post reported that dog walkers hired through Wag! had lost three dogs in a one-month ...

Yes. Dogfighting is illegal in Nevada under NRS 574.060 and NRS 574.070. 1. Does Nevada criminalize dogfighting? Yes. Dogfighting is a crime in Nevada. “Dogfights” are defined as matches between at least two dogs done for: amusement, gain, or show. Under Nevada dogfighting laws, it does not matter whether neither of the dogs dies, if ...

Leaving Your Pet Outside in Harsh Weather in San Bernardino County, California Can Lead to Animal Abuse Charges

In the mountains and deserts of San Bernardino County, weather conditions can get extreme. If you leave your pet outside in harsh or dangerous cold or heat, you could face California animal abuse charges. “Animal abuse” or “animal cruelty,” while broadly defined under California law, is focused on deliberate or malicious acts of cruelty and ...