A deposition is a testimony under oath outside of a courtroom prior to trial. In workers' compensation, the injured worker's deposition is often the only deposition taken.

The insurance company will pay for the cost of an attorney for the injured worker, so the worker's attorney will also be present.

The employer is also allowed to have a representative present.

The defense attorney is only allowed to take one deposition of an injured worker. 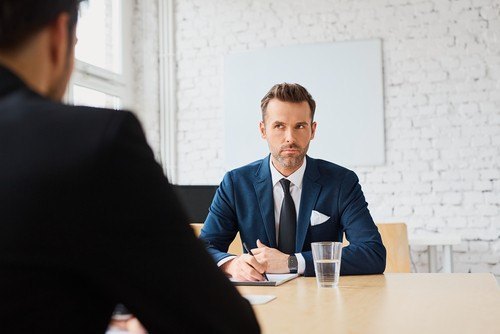 A deposition is the questioning of a witness under oath outside of a courtroom.

1. What is a deposition in workers' compensation?

A deposition is the questioning of a witness under oath outside of a courtroom.

The injured worker's deposition is the most important deposition taken in a workers' compensation case. Other than medical reporting, it is the main way for the insurance company to learn about the worker's injury.

Any party in a workers' compensation case can take a deposition.1 This means both the injured worker and insurance company can question witnesses under oath before the case goes to trial. Supervisors and coworkers are the most common witnesses. In death cases, the surviving relatives who are claiming death benefits may be deposed.

However, it is rare for witnesses to be deposed in California workers' compensation.

The transcript of the doctor's deposition can be submitted at trial.

The rules for taking a deposition in a workers' compensation case are taken from civil court rules.2

Before an insurance company can take the deposition of the injured worker, an Application for Adjudication of Claim must be filed.3 If not, there is no legal authority to schedule it. The application can be filed by the defense attorney or the injured employee.

An application is a part of filing a claim for workers' compensation benefits.

2. Deposition of the injured worker

The deposition of an injured worker is to:

If the injured worker refuses to attend his or her deposition, the case can be suspended.6 The insurance company has a right to investigate the claim.

The worker may be asked to settle his or her workers' comp claim at the deposition with a Compromise and Release. It is one of the few times outside of a status conference, mandatory settlement conference, or trial where all the parties in the case will meet in person.

Example: Joan's case has been denied. At her deposition, she is asked if she wants to settle her claim with a Compromise and Release for $15,000.

Joan declines because she believes her injury is more severe than the value of the offer. Her testimony will be taken, and she will likely be evaluated by a doctor to determine if she has a work injury, and if so, how severe it is.

The injured worker is sent a notice of deposition indicating a date, time, and location of the deposition, which will generally take place at the insurance company attorney's office.

The only people that will be present are

Even though the insurance company's attorney may ask personal questions, the employer representative still has a right to attend.

Example: Lance files a claim for a psychiatric injury. The insurance company schedules Lance's deposition and in attendance is Lance's manager, Greg. Lance does not want to answer questions about his medical and psychiatric history with Greg in the room.

However, Greg did not cause Lance's psychiatric injury. Lance cannot show good reason why Greg cannot be present.

4. What can and will be asked at a workers' compensation deposition?

The insurance company attorney will ask about:

From the testimony, the attorney may obtain records related to the worker's prior employment and medical providers.

If an injured worker refuses to answer a question, the attorney can ask a judge to order the worker do so.9

The scope of questions the attorney can ask is very broad. The questions are limited by whether they “reasonably assist a party in evaluating its case, preparing for trial, or facilitating a settlement.”10

Example: Alex is asked about medical conditions that he feels are unrelated to his injury. He does not want to answer them. They are embarrassing to him.

It is unlikely Alex will be able to avoid answering these questions as the defense attorney has a right to ask a broad range of questions to defend the claim.

5. What happens to the deposition transcript?

The transcript is given to the doctor who evaluates the injured worker for temporary and permanent disability.

The defense attorney will also use the transcript if the case goes to trial.

Therefore, it is essential to give clear and precise answers that do not differ from the answers he or she provided during the deposition.

6. Depositions of doctors and witnesses

If any party has questions about a doctor's report, either one can depose the doctor. Whatever answers the doctor gives can later be submitted at trial through the transcript.

Example: Mike suffered a knee injury at work. He is evaluated by Dr. Smith. When Dr. Smith is deposed, the defense attorney asks the doctor about records that show Mike had a knee injury playing volleyball six years ago.

The attorney wants the doctor to address whether this old injury may be the cause of Mike's current knee problems.

Whatever the doctor's testimony, the transcript will be part of the evidence for trial.

The insurance company will pay the costs to depose a doctor, including the doctor's time, and they will also pay the court reporter's costs.11

The injured worker will have to pay the cost of the court reporter if he or she wants to depose a witness. Witness depositions are very rare in workers' compensation.

7. The importance of a deposition to an injured worker's claim

The deposition is one of the primary ways the insurance company will learn about the extent of the injury and medical history.

It can determine how the insurance company values the case and how strongly it will dispute the claim.

The more the insurance company believes the injured worker is not telling the truth, the harder it may be to obtain benefits.

Therefore, a deposition is an important event in a workers' compensation case.

For help with filing a workers compensation claim in Calfornia, completing workers comp forms or appealing a denial of benefits, contact us at (855) LAW-FIRM. Our firm helps police officers, firefighters and other workers to get compensation for their job-related injuries.