When can kids be suspended or expelled for making threats? 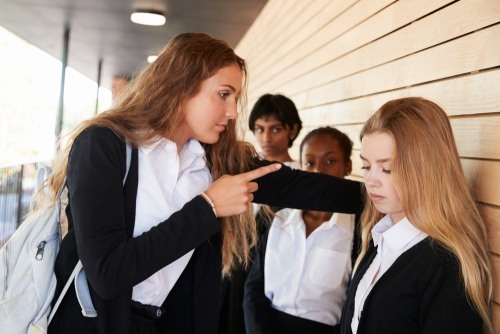 Students are engaged in school or school activities whenever they are:

Terroristic threats against a school or school officials consist of:

If a student is accused of threatening physical harm or making terroristic threats, he or she may claim that:

Please note that a pupil could be suspended if they do almost anything considered a crime under the California Penal Code during school or during school activities.

Can a student be suspended or expelled in California for threatening someone?

Yes. A student can be suspended or expelled from school, even for a first offense, if he or she:

For threats of physical harm that take place during school or school activities, they must occur:

Terroristic threats against school property or school officials are described in California Education Code 48900.7, and consist of:

Depending on the age and acts of the student, a principal may decide that there are alternatives to suspension. These include:

A student can be suspended for up to five consecutive schooldays. The total number of schooldays for which a pupil may be suspended in any school year is 20.

Will parents be notified if their kid is suspended or expelled from school?

Before any suspension an informal conference will be held between the principal (or other school personnel) and the student. A school employee must make a reasonable effort to contact the pupil's parent or guardian. At the conference the pupil shall be informed of:

The student is given the opportunity to present their version of events and any evidence.

In an emergency situation, there does not have to be a conference. Emergency situation means a situation determined by the principal to constitute a clear and present danger to the life, safety, or health of pupils or school personnel.

If a pupil is suspended without a conference, both the parent and the pupil must be notified.

Notice must be given within a reasonable time by telephone, mail, or other appropriate method. The notice must include:

Expulsion from school usually occurs for the most serious offenses, such as:

How does a student defend against accusations of threatening someone?

A student has the right to present evidence in their defense. These may claim: