What Is the Difference Between Residential and Commercial Burglary in California? 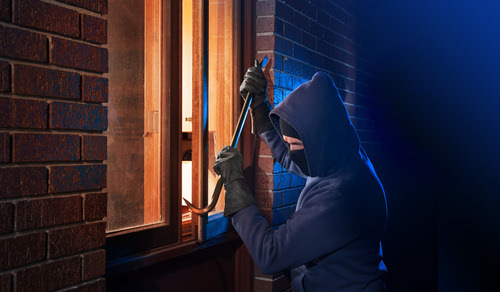 Burglary in California is divided into first degree, or residential burglary, and second degree, or commercial burglary. See Penal Code 460.

Burglary is committed when someone unlawfully enters a specified structure with the intent to commit theft or a felony.

Commercial (second degree) burglary is every other kind of burglary not considered first degree.

Residential burglary can only be charged as a felony in California and is punishable by:

Please note that residential burglary is a strike under California's Three Strikes Law.

Commercial burglary is a “wobbler,” which means it can be charged as either a felony or a misdemeanor.

There are numerous defenses to burglary that can be raised by an experienced criminal defense attorney. These include:

Under California Penal Code 459, a person is guilty of burglary if they enter a specified structure with the intent to:

Residential burglary is burglary of:

Inhabited means currently being used for dwelling purposes, whether occupied or not.

Commercial (second degree) burglary is every other kind of burglary not considered first degree.

After a man entered a tent and committed a felony he was charged with first degree burglary. The court found that “an inhabited dwelling house is defined as a person's actual place of abode, regardless of the material of which it is built.” People v. Wilson (1992) 11 Cal. App. 4th 1483.

Please note that a person does not have to actually commit a theft or a felony as long as he or she entered with the intent to do so.

Are there Different Penalties for Residential Burglary and Commercial Burglary?

Yes. Residential burglary, or burglary in the first degree, can only be a felony and is punishable by:

Please note that a person convicted of residential burglary in California MUST be sentenced to prison except in unusual cases where the interests of justice would best be served if the person is granted probation.

Residential burglary is a strike under California's Three Strikes Law.

Second degree, or commercial burglary, is considered a “wobbler,” and can be charged as either a felony or a misdemeanor.

Is Entering A Store to Shoplift Considered Burglary in California?

It depends on the value of the property. Prior to 2014, entering a store in California with the intent to shoplift was often charged as commercial burglary.

Now, under Penal Code 459.5, entering a commercial establishment during working hours with the intent to commit larceny is not burglary if the value of the property taken or intended to be taken does not exceed $950.

A man was discovered by police trying to break into and steal coins from a coin-operated soap dispenser in a laundromat. The court ruled he could only be charged with shoplifting under Penal Code 459.5, not burglary. It did not matter that he intended to take money as opposed to goods or merchandise. People v. Bunyard (2017) 9 Cal.App.5th 1237.

Please note that shoplifting less than $950 in California can only be charged as a misdemeanor UNLESS a person has certain disqualifying prior convictions.

Are There Legal Defenses to Burglary Charges?

Yes. An experienced criminal defense attorney will argue, among other things, that there was:

Here are several examples of successful defenses used by people accused of burglary:

A judge ruled that a man could not be charged with burglary for inserting a stolen ATM card into an ATM machine on the outside of a building because it “did not constitute an entry for purposes of the burglary statute.” People v. Carrington (2009) 47 Cal. 4th 145.

In another California burglary case: