Surgical staples lawsuits — How to file a claim

Surgical stapling lawsuits are mass tort claims against doctors, hospitals, and device-makers seeking compensation for the injuries that happen after a surgical stapling procedure has gone wrong. Staples are increasingly being used during surgeries as an alternative to stitches or sutures. But the staplers that surgeons use can misfire during a procedure, leading to serious injuries and medical complications. The frequency of these misfires has likely been underreported for years, prompting the FDA to consider taking action. More info at https://www.shouselaw.com/torts/stapler

Surgical stapler lawsuits are mass tort claims against doctors, hospitals, and device-makers seeking compensation for the injuries that happen after a surgical stapling procedure has gone wrong. Staples are increasingly being used during surgeries as an alternative to stitches or sutures. But the staplers that surgeons use can misfire during a procedure, leading to serious injuries and medical complications. The frequency of these misfires has likely been underreported for years, prompting the FDA to consider taking action. 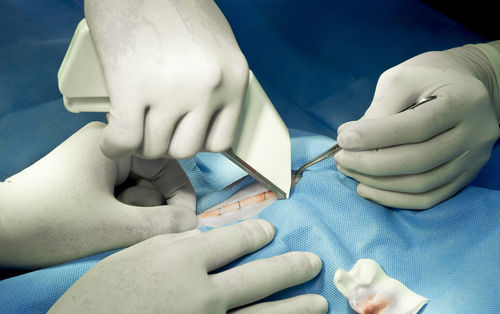 Just like sutures or stitches, surgical staplers and staples are used during internal or external surgical procedures to quickly close wounds or incisions, or to bind tissue together. The increased speed and reduced inflammation have made stapling an increasingly more popular solution than suturing or stitching incisions.

The specific stapler and the staples that a surgeon uses, depends on the circumstances. For example, there are numerous different types of staples, like:

There are also several types of surgical stapler, including:

A handful of companies are involved in designing and manufacturing surgical staplers and staples, with the major players being:

Surgical stapling, however, is not perfect. There are numerous risks associated with surgical stapling that are not present when doctors and surgeons elect to suture or stitch an incision, instead.

Some of these problems are caused by the staple:

Other problems are caused by the stapler:

Still other problems are caused by the surgeon's negligence, like:

Mishaps like these can be severe or even fatal, especially when a staple is injected into a patient where it should not have been. In many of these cases, a defective stapler or defective staples could have been the root cause of the problem.

As of April, 2019, the U.S. Food and Drug Administration (FDA) has regulated surgical staplers and staples as Class I medical devices. Class I medical devices are supposed to be those that present minimal potential for harm to a patient, and have a relatively simple design.1 Surgical staplers and staples are outliers in Class I, though, as they are found alongside far more mundane things like:

Importantly, almost all Class I devices are exempt from the bulk of the FDA's regulatory process, including the mandatory reporting of device malfunctions and the injuries they cause. As a result, non-fatal surgical stapler malfunctions cannot be found on the Manufacturer and User Facility Device Experience, or MAUDE, a publically-accessible database run by the FDA that tracks medical device failures.

Importantly, MAUDE is not just frequented by interested members of the public and journalists – doctors, surgeons, medical engineers, and even hospitals also use MAUDE to find safety data on medical devices so they can make informed decisions and provide better care for patients. Unbeknownst to the medical field, the only data available on MAUDE for surgical stapling devices involved fatalities – a tiny fraction of the total number of incidents.

Instead of being reported on MAUDE, non-fatal incidents involving surgical staplers or staples had been sent to the FDA's Alternative Summary Reporting Program (ASRP) – a database of incident reports that was not accessible to the public and that was conspicuously devoid of many important details.2

Companies that designed and manufactured surgical stapling devices had seen an opportunity to hide evidence that their Class I medical devices were linked to numerous injuries. They sought the exemptions necessary to report non-fatal incidents to the ASRP instead of MAUDE, and got them.3 It took medical professionals awhile to catch on: Many surgeons became suspicious of the low numbers on MAUDE after finding that a shocking number of their peers had experienced a surgical stapling malfunction.4

The number of surgical stapling incidents submitted through the ASRP was so high that the FDA issued a letter to health care providers to warn them of the danger.5 According to the FDA's figures, from 2011 through March 31, 2018, reports indicated that there had been over 32,000 surgical stapling malfunctions that caused:

Many of these injuries and fatalities were the result of a defective stapler.6

Some of the injuries in the reports were severe, including:

In nearly every one of them, though, the surgical stapling companies have tried to pin blame on the operating surgeon by saying the surgeon's negligence was responsible for the stapler's misfire.

All of the lawsuits so far have been pursued individually: There has not been a class action or multidistrict litigation formed, yet.

Victims of surgical stapling mishaps can recover compensatory damages that aim to cover their costs and losses associated with the injuries. These damages compensate victims for their:

Additionally, prior lawsuits over defective surgical staplers have led to punitive damages, as well. These are meant to punish defendants for especially wrongful conduct, like refusing to recall a device that is known to be putting innocent people at risk.

If you have discovered that a surgical stapling procedure has gone wrong and that you or a loved one has been hurt, call the medical malpractice, products liability, and mass tort attorneys at the Shouse Law Office at 855-LAWFIRM for help.