Injectafer lawsuits are mass tort claims against the pharmaceutical companies that make the drug Injectafer, a medication that treats anemia and kidney problems by increasing the amount of iron in a patient’s blood. However, studies have found that around half of people taking Injectafer develop hypophosphatemia, which can be fatal. Despite the risks, though, the drug companies behind Injectafer fail to warn doctors and patients.

In this article, our defective drug lawyers describe how Injectafer works and why it is often prescribed. We will then explain the serious risks it poses for patients, and the lack of risks present in other, similar drugs. We will then take a look at the lawsuits that have been filed over Injectafer, the compensation that victims can recover, and what you can do if you think you have suffered from the side effects of Injectafer. 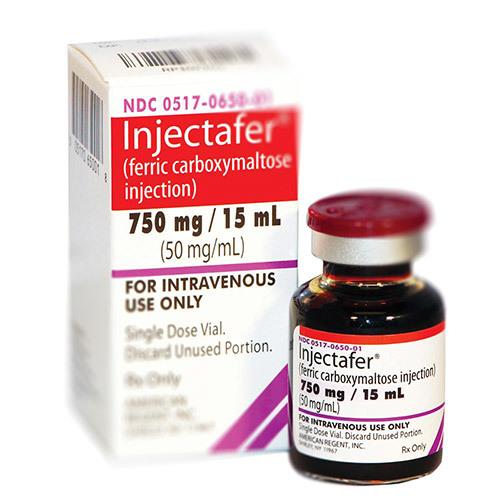 Injectafer is a form of ferric carboxymaltose, or FCM, a medication that replaces the iron in a patient’s body. It is taken intravenously in a controlled medical setting over two sessions separated by at least seven days. The 1,500 milligrams of Injectafer gradually release iron directly into the patient’s bloodstream.

First used in the U.S. in 2013, Injectafer injections have frequently been prescribed to people who cannot take oral iron supplement pills, or who have not responded well to them.

The following pharmaceutical companies are behind Injectafer:

People who get prescribed Injectafer are often suffering from medical conditions that inhibit the iron in someone’s bloodstream, like:

The most common kind of anemia, IDA is where patients have low levels hemoglobin in their red blood cells. Hemoglobin is necessary to carry oxygen carrier throughout the body. IDA symptoms include dizziness, headache, fatigue, and shortness of breath.

2. Does Injectafer increase the risks of hypophosphatemia?

Injectafer has been strongly linked to a shockingly high risk for a very serious side effect: The medical condition hypophosphatemia.

Hypophosphatemia is a dangerously low level of phosphate in the bloodstream – less than 0.81 millimoles per liter (mmol/L). When phosphate levels fall below 0.32 mmol/L, it reaches the level of severe hypophosphatemia (severe hpp), which can be life-threatening if untreated.

Symptoms associated with hypophosphatemia include:

If not treated properly and quickly, severe hypophosphatemia can be fatal.1

Numerous medical studies have connected Injectafer and its iron supplement, ferric carboxymaltose, or FCM, with a shockingly high chance of developing severe low levels of phosphate.

One of these studies found that the chances of developing hypophosphatemia after a dose of FCM were an astounding 70%.2 Another only focused on women, but found the odds to be 58.8%.3 Others found similar risks.4

Still other medical studies have shown that the increased risk of hypophosphatemia was only present with FCM, the type of iron supplement used in Injectafer. Similar injectable iron prescriptions did not come with such significant risks for hypophosphatemia.

Nevertheless, Injectafer does not list hypophosphatemia as a side effect on its warning labeling or any of its advertisements.

3. What is the status of lawsuits over complications caused by Injectafer?

Lawsuits have begun to be filed against the makers of Injectafer due to the overwhelming body of scientific literature linking Injectafer and FCM to hypophosphatemia. These lawsuits claim that Injectafer was defectively designed in a way that drastically increases the risk of hypophosphatemia, and also that the drug was defectively marketed for not warning patients about these risks. The first of these lawsuits was filed in federal court on January 18, 2019 in the Eastern District of Pennsylvania.11

Drug companies, including those that make and sell Injectafer, have a legal duty to disclose the side effects and medical conditions that their drugs can cause. Patients rely on this information to make educated decisions about their health. Additionally, doctors rely on these disclosures to prescribe drugs to their patients and alleviate their symptoms without creating others.

However, drug companies know that divulging the most serious side effects of their products can deter consumers and make them look elsewhere. They frequently use any excuse possible to avoid making these disclosures and protect their profits, even if it means putting people at risk.

The Injectafer lawsuits claim that the companies that make and sell Injectafer breached their legal duty to warn people about the side effects of the drug. By failing to warn doctors and patients about the high risk of developing hypophosphatemia, Injectafer’s makers hurt innocent people. The claims aim to recover compensation for the victims who suffered from the Injectafer side effects, as well as to hold the companies behind Injectafer accountable for their actions.

Because that failure to warn impacted so many people, Injectafer lawsuits are likely to become a class action or be consolidated into multidistrict litigation.

Additionally, drug companies have a duty to use compounds that do not put the people who take it in unnecessary harm. The stark contrasts between the rates of hypophosphatemia in people taking Injectafer and those taking a similar iron supplement suggest that the makers of Injectafer may have breached this duty, as well.

The FDA has not recalled Injectafer. Though the FDA initially denied approval to the IV treatment back in 2008 and 2011 because of severe hpp. FDA approval was finally granted in 2013 but only to IDA patients who did not respond well to oral treatment or who have chronic kidney disease that does not require dialysis. And in 2015, Luitpold Pharmaceuticals got an FDA non-approval letter for a television commercial that minimized the drug’s risks.

4. What compensation can victims of Injectafer get?

Additionally, defective drug lawsuits like these have frequently led to punitive damages being awarded. Punitive damages are rare, but seek to punish wrongdoers for especially problematic conduct, even if it means awarding victims far more than it would take to fully compensate them for their losses.

5. What do I do if I have been hurt by Injectafer?

If you have taken a dose of Injectafer and realize that you have developed the symptoms of hypophosphatemia, the first thing to do is see your doctor right away. Hypophosphatemia is a severe medical condition that can be fatal. Getting medical treatment is the most important thing to do.

If it becomes clear that you have developed hypophosphatemia, the next step is to talk to a lawyer for a free case evaluation and to learn your legal options. Filing a lawsuit against the companies behind Injectafer might be in your interests. If it is, your lawyer will help you put together the evidence you will need to show your losses, like your medical bills and calculations of the wages you have lost.

What crimes in California have no statute of limitations?

What can cause someone to get a “Probation Violation”?

Contributing to the delinquency of a minor – What does it mean?

You commit the criminal offense of contributing to the delinquency of a minor when you: commit some act or fail to act in a certain way, and the action or inaction makes a child more prone to engage in illegal activities. Common examples include: allowing your 13-year-old son to stay out after curfew and he ...

We are no longer taking Injectafer cases

Please note that our law firm is no longer accepting any new Injectafer cases. We created this page just to provide the public with information. We suggest you contact your local bar association lawyer referral service - they can help to connect you with a law firm that handles these cases. Sorry that we could not be of further help.