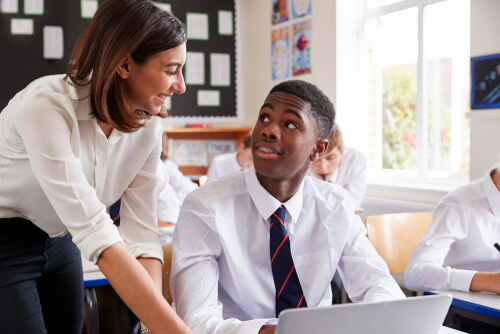 There are four main signs that a teacher may be engaging in sexual misconduct with a student. These are that the student:

Under California law, a teacher that engages in misconduct with a student could be charged with a crime, lewd acts with a minor child per California Penal Code 288.

Further, acts of misconduct could give rise to a civil lawsuit against the teacher, per California sexual harassment law Civil Code 51.9.

And, civil charges may even be able to get brought against the school district (in which the teacher is teaching in), for their negligent hiring of the teacher.

What are signs that a teacher is engaging in sexual misconduct with a student?

Some indications that a student is experiencing sexual misconduct from a teacher include:

As to this last sign, please note that students are more likely to hint at acts of misconduct rather than provide full disclosures. This is typically because the student may fear that:

What is California Penal Code 288 PC?

Penal Code 288 is the California statute on lewd acts with a minor child. Under this statute, a teacher could be charged with a crime for engaging in sexual misconduct with a student.

PC 288 says that it is a crime for a person to engage in “lewd acts” with a child under the age of 16. The section defines a “lewd act” as either:

A violation of PC 288 is typically charged as a felony. The penalty for the crime will vary depending on the age of the child and the facts involved. However, most offenses are punishable by years in jail and substantial fines.

What is California Civil Code 51.9?

This means a student could sue a teacher for sexual misconduct and might be able to recover compensation for economic losses and/or emotional distress.

Can civil charges be brought against a school district if sexual misconduct took place?

Under California law, it may be possible for a victim of sexual misconduct to file a civil lawsuit against the school district. The lawsuit would be for the district's negligent hiring of the teacher.

To succeed in this type of suit, the victim would have to prove the following: