California law requires vehicle owners to maintain auto liability insurance in case they cause an accident. The insurance covers the other party's medical bills, lost wages, car repair bills and other damages, up to the limits of the at-fault driver's policy.

In California, the minimum liability coverage required by law is 15/30/5.[1] This means the insurance will pay up to:

Most California car insurance companies offer liability insurance with limits greater than 15/30/5. Such additional coverage is optional. The higher the limits, the more expensive the policy and the greater the protection.

Insurers also sell additional optional coverage that can protect the driver and the driver's passengers as well as the driver's own vehicle. Such policies include:

1. How much auto liability insurance does California law require?

California's financial responsibility laws require drivers to maintain at least 15/30/5 liability coverage. This liability insurance is mandatory for all owners and drivers of motor vehicles in California.

Liability coverage causes damages to people in other vehicles or on the street when the policyholder causes an accident.

15/30/5 liability coverage will pay up to $15,000 of bodily liability damages incurred by pedestrians or people in another vehicle, with a maximum of $30,000 payable in total to all people in any single accident. This is sometimes also called "15/30" insurance.

The "5" in 15/30/5 represents property damage payable for damages to the non-fault driver or innocent third-parties.

Most California insurers offer higher liability limits than 15/30/5. In general, we recommend purchasing as much liability insurance as you can afford, especially if you are a homeowner or have other significant assets.

When a driver is at fault for an accident, the driver's auto liability policy pays the medical bills, property damages and other losses suffered by the innocent party or parties.

It does not cover losses sustained by the person who caused the accident or anyone in that person's vehicle.

Auto insurance also covers accidents where the other party is not in a motor vehicle, such as

3. What are the consequences of driving without insurance in California?

Driving without at least 15/30/5 liability insurance is against the law in California.

A driver who is unable to show proof of insurance will not be able to register his or vehicle with the DMV. The California DMV may suspend the driver's license.[2]

Drivers also face the possibility that a court will assess a fine or even impound their vehicle.[3]

4. How much car insurance do I need?

Although California law only requires 15/30/5 insurance, it may not be enough to pay for the other party's losses. It is especially likely to be inadequate if the accident is serious or there are many people in the other vehicle.

An at-fault driver is personally liable for damages that exceed the limits of his/her coverage.

So it usually makes sense for a driver to purchase as much liability insurance as he or she can afford, especially if the driver has significant assets (such as a home).

5. What if I was only partially at fault?

If the other driver has liability insurance, his/her percentage of damages will be paid out of that policy, to a maximum of the policy's limits. 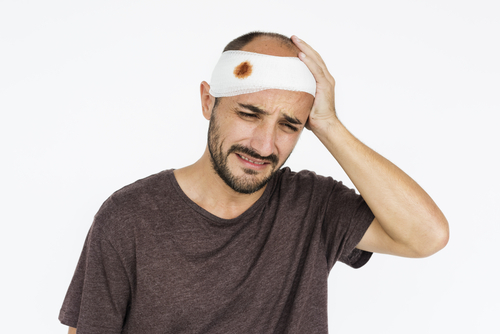 6. What if I am hurt in an accident that was my fault?

The best way to be protected for an at-fault accident is to have good health insurance.

A driver who does not have health insurance (or whose deductibles and co-pays are very high) can purchase California Med Pay Insurance and/or California uninsured / under-insured motorist coverage.

We discuss both, below.

“Med Pay” is short for medical payment coverage. It is a form of optional “no-fault” insurance that can be added to an auto policy in California.

Med Pay covers medical bills and funeral expenses (up to policy limits) for the policyholder and his or her passengers. It pays regardless of who was at fault for an accident.

The policyholder and his / her family can also claim payments under a Med Pay policy if they are:

Med Pay does not cover damage to any vehicle or other property.

Med Pay premiums are relatively low. It also covers treatments that are not covered by all health insurance (such as acupuncture and chiropractic).

However, people with good health insurance may not need or wish to incur the expense of Med Pay.

Uninsured and underinsured motorist coverage (known collectively as UMC / UIM) pays for injuries to the policyholder and his or her passengers due to accidents caused by other drivers.

UMC and UIM apply when the at-fault driver has no liability insurance, or has coverage with limits too low to pay all the injured person(s)' bills.

UMC/UIM pays for medical bills, funeral expenses and similar coverage for injuries to people. It does not pay for damage to the driver's vehicle or any other property.

Auto insurers in California must offer their policyholders UMC / UIM coverage with at least the same limits as their liability coverage or 30/60 bodily injury liability, whichever is less.[4]

So a driver who has purchased the minimum 15/30/5 insurance must be offered at least 15/30/5 uninsured / underinsured motorist coverage.

A driver with 50/100/25 coverage must be offered UMC/UIM coverage that includes at least 30/60 coverage for uninsured and underinsured motorist bodily injury (UMBI) but may include more.

Drivers are not required to purchase UMC/UIM coverage in California. They may decline it by signing a waiver confirming they were offered it but chose not to purchase it. If they elect the coverage, they will be charged an additional premium.

Collision and comprehensive insurance are usually offered together in California.

Collision insurance pays for damage to your vehicle caused by your car colliding with something else while it is moving – for instance, another vehicle, a fence, a parking divider or even a person.

Comprehensive insurance pays for damage to your vehicle caused by something other than a collision that is outside of the vehicle owner's control. Examples include:

The cost and limits of collision and comprehensive coverage are based on the value of the vehicle.

Accordingly, it may not be worth the premium to purchase this coverage for low value, used vehicles.

It is usually worth the expense for newer or high-value vehicles.

This coverage comes in the form of “add-on” insurance known as an “endorsement” or “rider.” Examples of California car endorsements include:

For instance – a driver may own more than one vehicle and may also have a homeowner's or renter's insurance policy. If all these policies are at the maximum limit, the umbrella offers “overage” coverage. If a claim under any maxed out policy exceeds the policy limits, the umbrella policy will pay the extra damages, up to policy limits.

Paul causes an accident in which a passenger in the other car sustains a catastrophic injury. The passenger's damages total approximately $750,000.

Since Paul's liability insurance only covers up to $100,000 of injuries, Paul is personally responsible for the other $650,000. If he doesn't have enough cash, he might lose is home in a forced sale of assets.

In this example Paul has a personal umbrella policy which provides an additional $1,000,000 of coverage. The insurer still pays $100,000 under his Paul's California liability policy.

But now instead of looking to Paul's assets for the additional $650,000, it is paid under Paul's umbrella policy.

Paul's umbrella policy would also apply if anyone suffered serious damages at Paul's house as the result of Paul's negligence, for instance in a California “slip-and-fall” accident.

Car accident in California? Call us for help…

If you or someone you know needs help negotiating with an auto insurer we invite you to contact our California car accident lawyers for a free consultation.

Call us at (855) LAWFIRM to discuss whether you are entitled to compensatory damages, including damages for pain and suffering.

We also have Las Vegas and Reno offices to serve your needs if you have been in a car accident in Nevada.